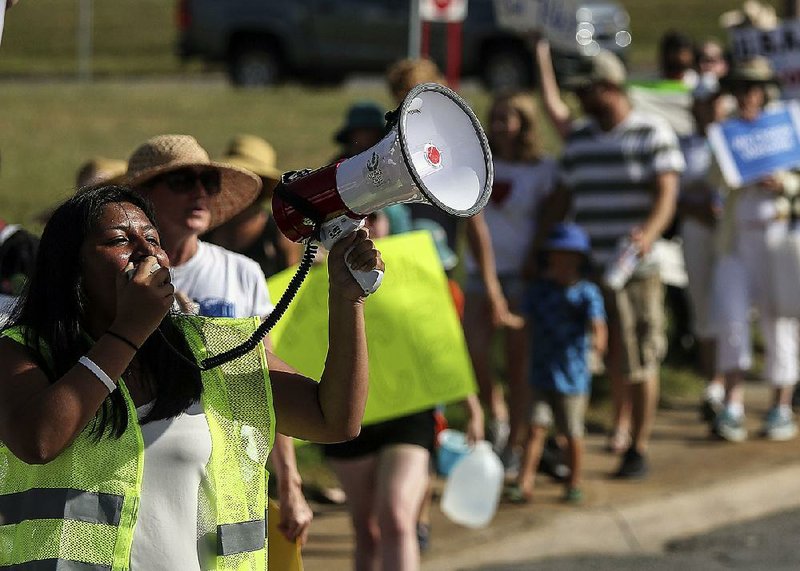 In Little Rock, Lesly Mendez, who will be a senior at Parkview Arts and Science Magnet High School in the fall, leads the crowd in chants as they march toward the state Capitol grounds. Rallies were also held in Conway, Hot Springs, Jonesboro, Fort Smith and Fayetteville.

Hector Hernandez's son hides under his bed at night because he's afraid federal agents will take his father away.

Five months ago, the family moved from California to Little Rock. When Hernandez's wife, Ira, went to report the address change, she was detained by Immigration and Customs Enforcement agents and taken to a center in Louisiana.

Hernandez said he doesn't know why -- what he does know is that living without their mother has caused his 6- and 9-year-old boys to suffer from anxiety and depression.

"The collateral damage is for them," Hernandez said, pointing to the boys who were playing in the grass near him. "Psychological. It's really, really bad."

Hernandez took his sons to march in the Families Belong Together rally in Little Rock on Saturday. The boys held signs that said "Defund ICE." The 6-year-old ran ahead of his father during the march from Martin Luther King Elementary School to the Capitol, unaware that his sign was upside down.

There were between 400 and 500 people at the rally, said Maria Meneses, one of the organizers.

Many attendees pushed strollers or carried children on their backs. A few carried homemade signs.

The event was organized to protest family separations and the zero-tolerance policy President Donald Trump has enacted for anyone who enters the U.S. illegally, which is a misdemeanor.

Kerri Evans, who attended the rally, said she has seen firsthand the effects of children separated from their families. She has four children she adopted from Cambodia, and one of her sons has post-traumatic stress disorder from the separation.

His parents died within three months of each other, one of his siblings was sold and another just left, Evans said. Now, he goes to therapy for PTSD and suicidal thoughts.

"That's the kind of stuff we're doing to kids," she said.

Meneses said the problem has been ongoing for years, and she wants the people to hold elected officials accountable. Volunteers walked around the event, helping people register to vote.

"Congressmen should be representing our people," she said, "instead of continuously putting down their own communities."

Hundreds of Northwest Arkansas residents rallied outside the Fayetteville Town Center to protest the Trump administration's immigration policy. They also called for local law enforcement agencies to stop participating in the 287(g) program.

The program allows state or local law enforcement entities to enter into a partnership with the U.S. Immigration and Customs Enforcement agency to allow immigration enforcement authority within their jurisdictions, according to the federal agency's website.

Fayetteville Mayor Lioneld Jordan said at the rally that he had instructed the city's police not to participate in the program.

"I stand firm in saying no to separating immigrant children from their families," Jordan said.

Elsewhere, nearly 200 people participated in a march Saturday along Bathhouse Row in Hot Springs National Park. Kaela Bradbury, organizer of the rally, said she was inspired after seeing photos of the children being separated from their parents at the border in Texas.

"I have nephews and nieces that look just like those babies," Bradbury said.

Also Saturday in the national park, the Confederate Square Group held an event co-hosted by the Arkansas Freedom Crew and The Hiwaymen. According to its Facebook page, the event was to discuss housing "undocumented minors" in Arkansas and the rise of socialism and communism in the state and the nation.

That event drew about 15 people, who handed out fliers listing more than 20 organizations they believe "stand against the very fabrics in which America was founded," including the March for Our Lives, Planned Parenthood and LGBT groups.

In Little Rock, Hernandez said he came to the United States from Guatemala seeking protection from a corrupt government. He glanced over at a sign another marcher was holding. It said "No Body is Illegal."

"All the humans have rights," he said. "Human rights."

The event organizer told Hernandez's story as one of the final parts of the rally. His sons stood behind her, the 6-year-old's arms crossed over the rocket ships on his shirt.

The rally closed with a quiet vigil. Everyone stood in a circle, holding their cellphones up high. Hernandez and his sons stood at the top of the Capitol steps, across from a marcher who held up a replica of the Statue of Liberty, white lights from cellphones illuminating her gold lantern.

Information for this article was contributed by Rebekah Hedges of The Sentinel-Record and by Ashton Eley of the Northwest Arkansas Democrat-Gazette. 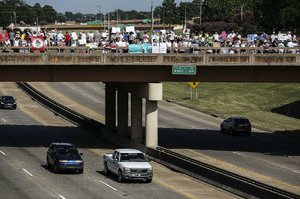