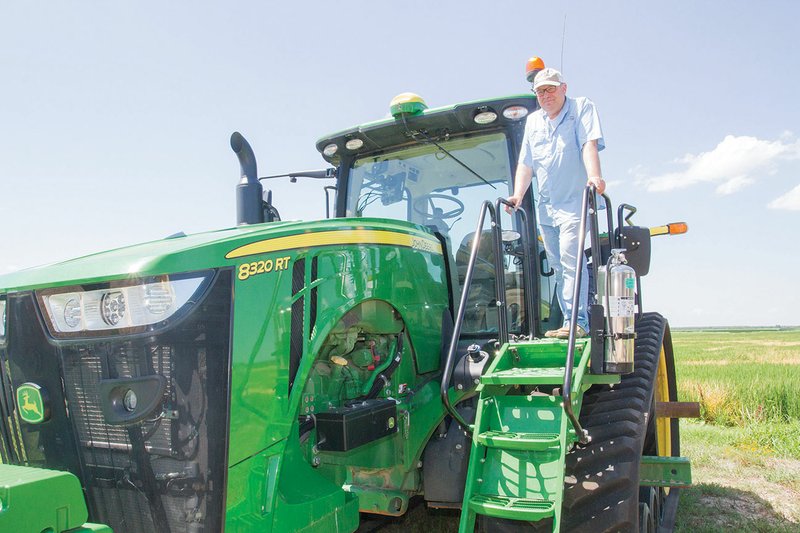 Chris Isbell of Humnoke stands on one of his John Deere tractors at his farm, Zero Grade Farms, near Humnoke. The Isbells are the 2018 Lonoke County Farm Family of the Year and the East Central District’s top farm family.

HUMNOKE — Isbell Family Farms is the 2018 Lonoke County Farm Family of the Year. The farm is headed by Chris Isbell and his wife of 43 years, Judy.

The farm, known as Zero Grade Farm, plants only rice on its 3,000 acres in south Lonoke County.

“It’s a big honor, but it’s not one that we’ve sought after,” Chris Isbell said. “We just do what we do. We enjoy farming. We try to stay up on all the research and all of the new things that are coming. We try to look into the future and see where things are going and try to be there when the time comes.”

Chris Isbell said he was born on the farm and never really left it.

“Somewhere along the line, my dad (Leroy Isbell) told me that I didn’t have to be a farmer,” Chris Isbell said, “so I thought about other things that I might like to do. I went to college and studied business and didn’t like it. I realized at about 19 that I wanted to be a farmer.”

Isbell said he’d come home on weekends from Conway to work on the farm. He even came home after class during harvest season to work until dark, then head back to college. He was hooked.

Isbell said he likes the way things change from year to year in the way his family farms its rice crops.

“If I get to do it the way we do it, I love it,” he said. “If I had to farm without thinking anything is going to change, doing it exactly the same year after year, I wouldn’t like that. We get to do things a little differently along the way.”

One aspect of farming that the Isbells utilize that they are proud of is being sustainable.

“What that means is you’re growing your crop not only in a safe way but in a sustainable way, where you’re not using as much water or using as much nitrogen,” Isbell said. “That’s all good for the consumer. And if you’re not doing those things, you’re also not spending as much money. It’s a money-saving situation. It’s something that you want to do, strive to do, and it’s the right thing to do.”

Isbell said his farm tries to use as little ground water as possible.

While some farms have a specific water-recovery system that is funded through the United States Department of Agriculture or the Natural Resources Conservation Service, Zero Grade Farms does not have that.

“But the way our farm is laid out, we have three bayous coming through the farm,” Isbell said, adding that he can “drop” off water after it’s used in one field to another.

“We have a natural recovery system,” he said. “We use reservoirs as well as we can use them. A lot of our fields are cascading fields. It’s all zero grade. We water one, drop off the water and water the next one. When it finally leaves, the water goes into the drainage system, and we pick it up on another field.”

With the use of zero-grade practices, the Isbell rice fields have no levees.

“We didn’t have to put levees in them anyway,” he said, “but they weren’t completely flat. Laser-leveling technology came out in 1977. We decided we were going to buy some laser equipment and dirt-moving equipment. That’s about all I’ve done all my life is move dirt. The whole farm is zero grade.”

Isbell said his farm stopped growing soybeans in the 1970s because the soil on the farm is better for growing rice.

“Most of our ground is heavy clay,” he said. “I always tell people when they say, ‘You just grow rice,’ I tell them, ‘We decided that once we learned how to grow rice, we’d try something else.’”

Because of the clay-type soil, Isbell said, growing soybeans is sketchy.

“If it gets really dry and you have to water the soybeans, a lot of times, you will kill them because you’ll scald them,” he said. “I don’t grow soybeans because I’ve seen that happen. This dirt wants to grow rice, so we just follow the lead.”

Also, the farm has grown rice for 59 years, consecutively, in one field. A sign is placed on Arkansas 13 just north of Humnoke to commemorate that.

Isbell said he is big into researching information about farming. That led him to start attending the biannual meetings of the Rice Technical Working Group conferences.

“They all meet and show what they’ve accomplished in the past two years,” Isbell said. “I started going to those meetings.”

He met many researchers who had doctorates. He was probably the only farmer at the meetings.

“I was really popular at those meetings. … They wanted to know what I thought about where their research was going and if it was going to be usable when it got to the farmer,” he said. “I really enjoyed that, and I think they enjoyed having me around. That led me along the path of seeing a little bit into the future, what might be coming down the road and how.”

Isbell said his son, Mark, and his son-in-law, Jeremy, as well as his nephew Shane are sharp when it comes to the farm.

He said Mark and Jeremy will participate in a leadership program from the U.S. Rice Federation during which they will tour other rice-producing states.

“They’ll see the differences in the way that, say, California grows rice versus how we grow rice in Arkansas,” Isbell said. “They come back and have an understanding of the whole workings of the rice market. They’ll go to the Chicago Board of Trade, places like that.”

Isbell said people outside of Arkansas don’t think of rice being grown in the United States.

“When you think of rice, you think of Asia,” he said. “The marketing is a little more difficult. it’s up and down a lot more than with corn and soybeans.”

In an attempt to gain better market share, not only do the Isbells grow the normal long-grain rice; they have 100 acres devoted to rice for sake.

“The farm in recent years has shifted focus to even more unique varieties — rice varieties grown specifically for the making of sake,” he said.

While he never graduated from college, Isbell said, he wishes he had a degree.

“I feel like I have a degree in growing rice,” he said. “Maybe somebody will give me an honorary degree. There is some self-pride in that. Looking back on my life, I don’t see where the degree would have helped me.

“This has been a really good life.”