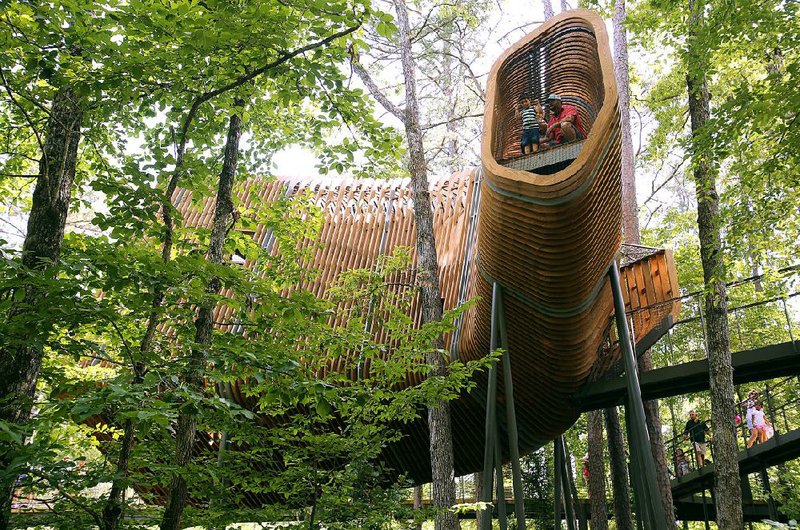 Josh McGriff of Star City and his son, Judd, 2, check out the view from the top during the soft opening of the treehouse at Garvan Woodland Gardens in Hot Springs on Saturday. More photos are available at arkansasonline.com/galleries. ( Thomas Metthe)

The V-shaped mass of cascading beams is almost camouflaged in the throng of trees in which it stands, which Siebert said makes the exhibit a part of the nature surrounding it.

"Our concept was a treehouse in the woods and amongst the woods," Siebert said. "It floats. It's mysterious, but it's also modern."

At the soft opening Saturday of the Bob and Sunny Evans Tree House in Hot Springs, children ran rampant around the ribbed structure.

Inside, some children ventured up to the third-floor crow's nest -- accessible only by climbing a rope net -- while others found a bird's-eye view of their own through the wooden rafters.

Below the house, which stands 13 feet off the ground, is a plaza with a quiet stream, boulders and stone bridges, and a pebble inlay of tree roots.

The rocks and waterfalls, Siebert said, aren't just for show; they were designed for play.

"We tried to put ourselves in a kid's mind," Rusk said, "to go back in time a little."

Sahar Kattom, who went with her five children, said describing the structure was difficult.

The open beams almost look like an optical illusion against the trees, she said, while letting in light from nearly every angle.

"I love the nature," she said, clutching a bag full of bread she took for fish in one of the nearby streams. "It's so relaxing. It feels like being in a beehive; I've always wanted to be in a beehive."

Each layer of the exhibit is meant to represent a segment of tree growth, Garvan Woodland Gardens Director Becca Ohman said.

The plaza below is inlaid with roots, the house's metal "trunks" tilt at imperfect angles as though they sprouted from the ground, and the tri-level interior will soon be filled with metal flowers and foliage.

"This is a dream for the gardens," said Ohman, who has worked at the park for more than six years.

Approximately 350 donors fully funded the construction of the project, according to a news release about the event, and although construction began just one year ago, the concept for the building has long been in the making.

Carol Lane, who took her husband, daughter and three grandsons to the event, said she goes to the park often, but wanted to make a special trip to see the treehouse.

The three boys, Joshua, 7, Nathan, 4, and 3-year-old Timothy, and their mother, Catie Curtis, also partook in the water exhibit, climbing over rocks and sticking their feet in the waterfalls.

"Oh, they loved it," Lane said of her grandsons. "They scrambled all over it."

The treehouse sits toward the back of the Evans Children's Adventure Garden, but Siebert said the playhouse and learning exhibit is the centerpiece of the park.

After five years of designing and thousands of sketches of the exhibit, however, Siebert said he and Rusk were just excited to see children playing in their creation.

"It's surreal," Siebert said. "It's awesome to look out and see all these kids engaging. It's what we wanted." 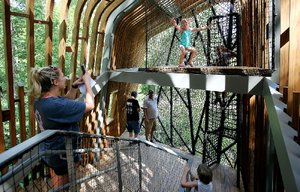 Photo by Thomas Metthe
Ellison Brewer, 3, (top) of Springdale poses for a photo for her mother, Sara, during Saturday’s treehouse opening. The structure is designed to inspire children’s interactive learning.