Sultana museum in Arkansas memorializes 1,800 who died in river 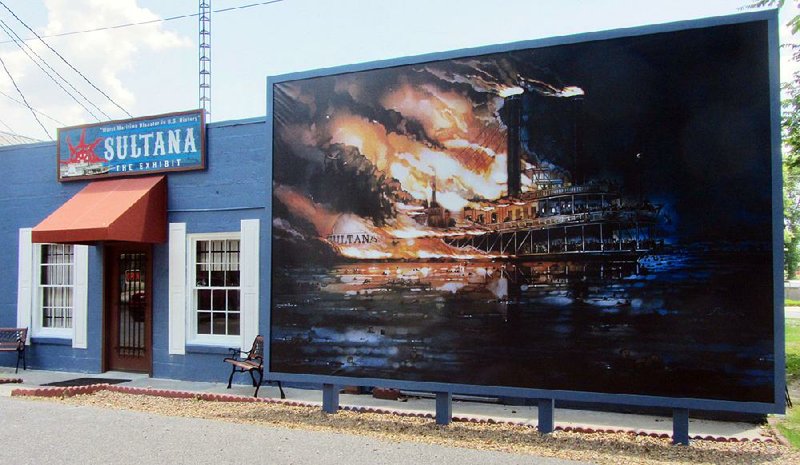 Sultana Disaster Museum in Marion tells the story of the nearby Mississippi River steamboat explosion and fire that caused 1,700 to 1,800 fatalities in 1865.

MARION -- The shifting of Mississippi River channels over the past 153 years has left the charred wreckage from history's deadliest U.S. maritime disaster buried beneath a farm field in Crittenden County.

Now inland, that location is where the smoldering ruins of the side-wheel steamboat Sultana ran aground on April 27, 1865, after a 2 a.m. explosion and fire that eventually took the lives of 1,800 passengers and crew members. To compound the tragedy, nearly all the victims were Union soldiers. Recently freed in generally poor health from Confederate prison camps, they were finally heading home.

Sultana Disaster Museum in Marion vividly tells the story of what it calls "The Forgotten Tragedy," which took more lives than the 1,512 lost in the 1912 sinking of the Titanic. But the mind-numbing loss on the Mississippi got scant news coverage in a nation absorbed by the Civil War's ending and Abraham Lincoln's assassination. A century and a half later, it remains something of a historical footnote.

The museum in Marion, near the stately Crittenden County Courthouse, makes clear the human dimensions of the sinking. It also supplies the background that led to the packing of 2,200 or more men (and a few non military women) aboard a vessel only 265 feet long with a legal passenger capacity of 376.

Exhibits portray the miseries that the Union troops aboard the Sultana had survived at the infamous Andersonville camp in Georgia and the less inhumane Cahaba facility in Alabama. Photographs show the emaciated physique of most freed prisoners, who felt blessed to have survived for repatriation when so many of their comrades had died of disease and mistreatment.

It is pointed out that financial avarice accounted for the overcrowding of the Sultana, which sailed north from Vicksburg with so many former POWs that there was hardly room to lie down. The vessel's captain had bribed a Union officer to grossly overload the boat because the government was paying $5 per enlisted man and $20 per officer for transport north.

The Sultana had docked in Vicksburg to have leaking boilers patched. But one or more boilers exploded in the middle of the night about eight miles north of Memphis, killing hundreds of passengers instantly. Most others were forced to jump into the chilly Mississippi water, where hypothermia and drowning took a heavy toll.

A museum centerpiece is a 14-foot-long model of the Sultana crafted by Gene Eric Salecker, a military historian who owns a large collection of the boat's artifacts and memorabilia. Salecker is the author of Disaster on the Mississippi, a book about the explosion and fire. On sale at the museum, the paperback contains a list of all those known to have been aboard on April 27, 1865, and whether they died or lived.

A similar list is posted at the museum. The human impact of the tragedy is further emphasized by dozens of photographs portraying victims, most of them in uniform. Also displayed are a couple of U.S. flags flown at meetings of the Sultana Survivors Association, a yearly event from about 1890 until 1930. The last known survivor, former Pvt. Albert Norris of the 76th Ohio Infantry, died at age 94 on April 1, 1934.

On the drawing board in Marion is a larger Sultana museum, which will aim for additional focus on the first-person narratives of survivors.

Planners assert that "strong emphasis should be placed on telling this story through the eyes of those who witnessed it, using printed quotes, audio re-enactments and/or other techniques and technologies."

Meanwhile, the present museum does a first-rate job of recounting a horrific event usually mentioned in passing -- if at all -- in accounts of the Civil War.