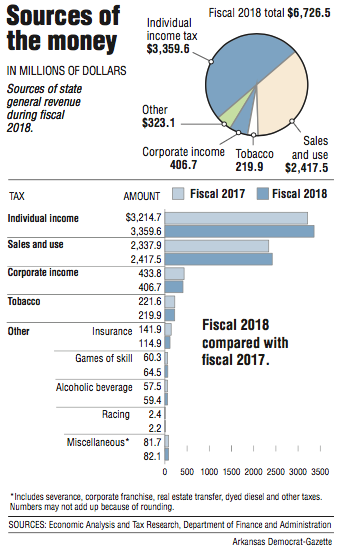 State government in Arkansas closed its books on fiscal 2018 with $41.7 million more than anticipated in net revenue, even as corporate income tax collections fell and total revenue sagged in the final month, June.

The $6.73 billion in gross collections for fiscal 2018, which ended Saturday, was a record for the state, according to the Department of Finance and Administration. The revenue report released Tuesday showed that revenue for the year was buoyed by stronger-than-expected individual income taxes, the manifestation of a strong economy, officials said.

Still, revenue from some other sources -- including corporate income and sales taxes -- fell below projections, as did the state's overall gross general revenue. But the state also saw fewer revenue deductions than expected, meaning the resulting pot of money available to spend -- about $5.49 billion -- was up from estimates at the start of the year.

"That is good news," Gov. Asa Hutchinson told reporters Tuesday. "It reflects the job growth we've had in the state of Arkansas, as well as the growth in our retail sector."

Nearly $3.36 billion in income taxes was collected from individual Arkansans, beating the state's forecast by 1.1 percent.

The state also collected nearly $80 million more, or 3.4 percent, in sales and use taxes than it did last year. However, the windfall was not quite as large as the state expected, and the $2.42 billion the state collected from sales tax was about $1.4 million, or 0.1 percent, short of projections.

Collections peaked in April during fiscal 2018, when the state also set its single-month record for gross revenue. The fiscal year also set revenue-collection records for six different months, according to the Department of Finance and Administration.

But in June, gross revenue was $659.1 million, or $13.6 million, below forecast and $7.1 million under what was collected in June 2017. The biggest shortfall for the month was in corporate income tax collections of $63.5 million, which were $8.8 million below predictions.

The higher-than-ever revenue for fiscal 2018 came even after Hutchinson and the Republican-controlled Legislature cut income taxes in two successive general sessions. Predicting that economic growth will provide room for even more cuts, Hutchinson said earlier this year that he will ask the Legislature in 2019 for a $180 million income tax cut for the wealthiest Arkansans.

A legislative task force is reviewing the state's tax code to make recommendations on changes.

Democrats have expressed skepticism of the governor's tax plan, warning that further cuts could lead to the kinds of budget shortfalls seen in Louisiana and Oklahoma.

"I think it's pretty remarkable that we've cut taxes as much as we have and we're still meeting budget," said state Sen. Larry Teague, D-Nashville. As one of the Joint Budget Committee's co-chairmen, he said the "encouraging" revenue report indicated that there was room for more tax cuts, though likely not as much as the governor has called for.

Hutchinson's administration offered a rosy outlook on the state's economy while reviewing the report.

"I think it shows continued strength in the state economy as measured by the annual growth in individual [income taxes] ... and sales taxes growing in a steady rate in line with incomes," said John Shelnutt, the state's chief economic forecaster.

The biggest shortfall for fiscal 2018 came from corporate tax collections, which were down $27.2 million from fiscal 2017, and $59 million, or 12.7 percent, below forecast. Estimates for that category of revenue are notoriously hard to predict, according to finance department officials.

"It's lumpy," said Department of Finance and Administration Director Larry Walther. "You're dependent on large companies in Arkansas and their tax planning."

At the close of the year, total net revenue surpassed the state's expectations, and "basically zeros out" with the funds spent by state agencies, according to a finance department spokesman, meaning the state did not have a significant budget surplus.

The lack of a surplus, a quarter of which is dedicated toward highway spending, means the state will have to find an additional $21.9 million for the Department of Transportation to spend in order to receive federal matching funds for highway projects.

"We don't know at this point specifically which fund will be utilized to provide these funds as this will likely be decided over the next month," finance department spokesman Scott Hardin said in an email.

The Arkansas Department of Transportation had already been given $28 million in fiscal 2018 for matching funds, out of an expected $50 million.

Print Headline: State takes in $41.7M above forecast for fiscal 2018