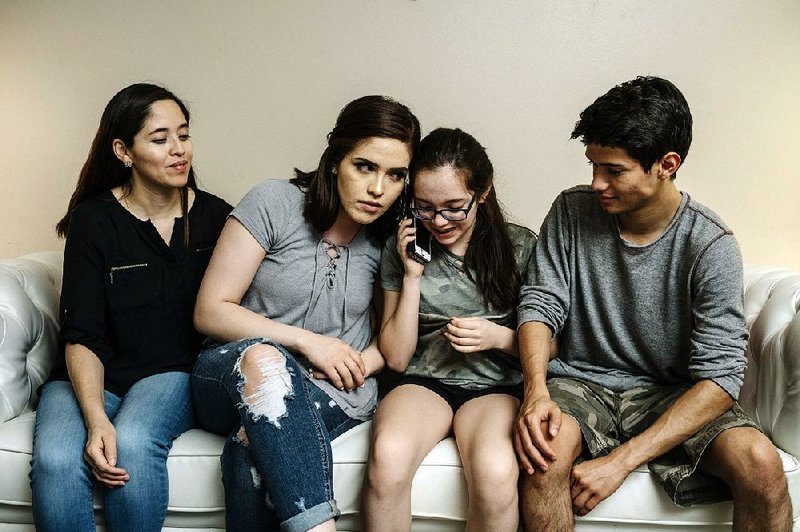 Yadira Lopez looks on as her children Juana Barrios, Andrea Barrios and Oscar Barrios speak by phone with their father, who was detained in Iowa by immigration authorities in May.

MOUNT PLEASANT, Iowa -- In the days after immigration agents raided a dusty concrete plant on the west side of town, seizing 32 men from Mexico and Central America, the Rev. Trey Hegar, pastor of First Presbyterian Church, got into an impassioned argument on his Facebook page.

The person came back with the passage in the Gospel of Mark about rendering unto Caesar the things that are Caesar's, and added: "Immigration laws are good and Godly! We elected our leaders and God allowed it."

President Donald Trump's immigration crackdown has been promoted with biblical references by senior members of his administration, including Attorney General Jeff Sessions. And in heartland communities where the president is popular, the crackdown is often debated -- by supporters and critics alike -- through the lens of Christian morality.

In Mount Pleasant, a town of 8,500 in rural southeast Iowa that largely supported Trump at the polls, the president's immigration policies created an unexpected fracture in the days after Immigration and Customs Enforcement agents descended on May 9. Fault lines appeared among public officials, businesses and, especially, the town's many churches.

"This whole immigration thing has been an abstraction," said state Rep. Dave Heaton, a Republican from Mount Pleasant. "It's been on TV and in the newspapers. And all of a sudden it's here in our town. Relationships and everything are all of a sudden up for grabs."

It was a few weeks before parent-child separations at the border became widely reported on in the news, exposing divisions among faith groups nationally. The expressions of dismay nationwide helped to drive Trump's eventual retreat from the policy, but they reflected the same interfaith division that opened in Mount Pleasant over the workplace raid, another facet of the administration's "zero tolerance" policy.

Hegar, a Texan who served four years in the Marines before attending a Presbyterian seminary, finally asked the person he was debating on Facebook: "Which Scripture do we obey?"

He answered himself: "The one from Jesus to 'Do unto others' is what we choose."

Hegar's church on Walnut Street is across from the site of Mount Pleasant's most popular event, a Labor Day festival of steam-powered tractors and other farm machinery. In the days and weeks after the raid, the church became a hectic crossroads for family members of the detained men and their supporters. Parishioners in a group called Iowa Welcomes Immigrant Neighbors raised $80,000 to help detainees' families pay rent, utilities and legal fees.

Other mainline Protestant churches, including the Lutherans, contributed to the fund, as did the Catholics at St. Alphonsus, where a Spanish Mass is held once a month. Notably absent from the donor roll, though, were Mount Pleasant's evangelical churches.

Hegar said he heard relatives of a detained man say that the pastor of the evangelical church they have attended for years had not called to ask if he could help them. "My heart breaks for that," Hegar said.

The town's evangelical pastors, whom he knows, are compassionate individuals, he said, "but to see nothing, after something like this in their backyards -- I'm shocked."

He attributed their silence to what he said was the strong political alignment between American evangelicals and Trump, who counts heavily on their votes.

"The nationalistic politics and theology goes hand in hand now," Hegar said. "It drives me crazy when we don't practice what Jesus preaches because of the mix of religion and national politics."

One evangelical pastor who did agree to an interview in the days after the raid was Jim Erwin, the head of Wellspring Evangelical Free Church. He said no one from the mainline churches had suggested he raise money; if they had, he said, he might have chipped in.

But Erwin added that he believed the detentions were justified: "Because they're breaking the law, I recognize the authorities do need to come in and do that."

On a day in mid-May when the president referred to immigrants who join gangs as "animals," more than 100 people crowded into the fellowship hall of First Presbyterian Church, including about 25 wives and children of the detained men.

No charges have been filed against the owners of the Midwest Precast Concrete plant in Mount Pleasant that was raided. An Immigration and Customs Enforcement spokesman declined to comment, citing a continuing investigation.

According to Robin Clark-Bennett of the Center for Worker Justice of Eastern Iowa, 23 of the 32 arrested men have been released on bond, three have been deported and five remain in jail facing criminal charges.

While emotions ran high at the meeting in the fellowship hall, not everyone in Mount Pleasant, nor even at First Presbyterian, sided with Hegar.

"I agree with our president: our borders, we can't open it to everybody," said Rusty King, the church's custodian, the following day.

His granddaughter, Angel King, passed along a Facebook post written by a young man from Mount Pleasant that echoed King's own views.

"I can't hold my tongue any longer," Garrett Carlston wrote in the post on May 10, when supporters of the detainees were rallying at the Henry County Courthouse. "I feel bad for the families that are going to be torn apart by this but it's hard for me to sit here and act like it isn't the fault of the people who brought them across the border."

He wrote that the vigil-keepers lacked sympathy for American citizens. "What about the ones living in Mount Pleasant who couldn't find a job because they were employing illegal immigrants instead?"

The view that immigrants take jobs from citizens or depress wages was a common one, but it was disputed by local business owners. The unemployment rate in Henry County is 2.9 percent, and many factories display "Hiring" signs.

Gary Crawford, who owns Mt. Pleasant Tire, said he paid tire installers $16 to $24 an hour, with full benefits. "I know most of the people who run the factories," he said. "They just can't find help."

Crawford belongs to St. Alphonsus Catholic Church and on the Sunday after the ICE raid, he heard the Rev. Paul Connolly, with the detained men in mind, devote his homily to the Good Samaritan, the exemplar of caring for strangers. "All of us were immigrants at one time," the priest said. 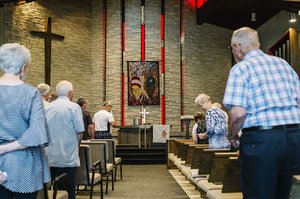 Photo by The New York Times/William Widmer
First Presbyterian Church — which became a crossroads for families and supporters of 32 immigrant cement plant workers who were detained in May — is in Mount Pleasant, Iowa.