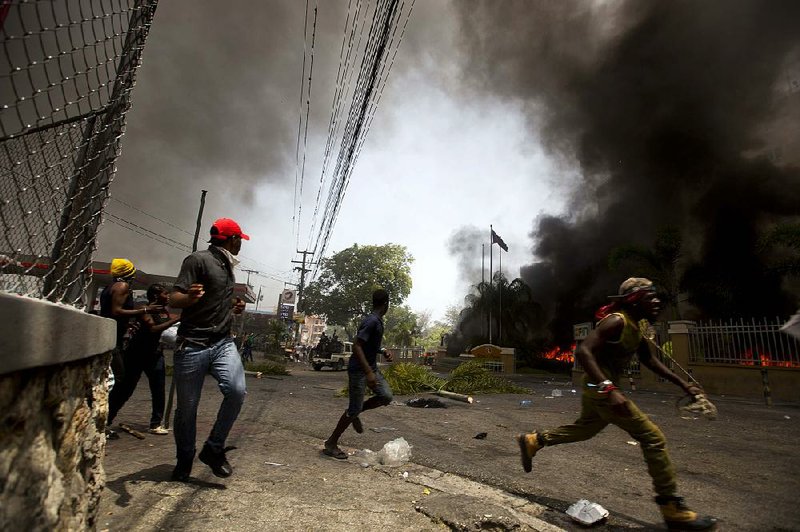 People run from Haitian police officers Saturday as cars burn in the garage of a hotel in Port-au-Prince during a violent protest over planned fuel price increases. The government suspended the increases Saturday after rioters burned tires, looted stores, set fire to cars and attacked at least one hotel.

PORT-AU-PRINCE, Haiti -- The Haitian government suspended a fuel-price increase Saturday after widespread violence broke out across the capital and in the northern city of Cap-Haitien.

Protests also were reported from Cayes, Jeremie, and Jacmel. The country's airports were closed.

Prime Minister Jack Guy Lafontant had originally said the country needed to raise prices to balance the budget, but his administration bowed to pressure after demonstrators took to the streets in protest.

He said on Twitter that a planned price increase of up to 50 percent had been suspended. "The government strongly condemns the acts of violence and vandalism," he wrote.

A journalist from The Associated Press reported seeing several hundred people on Saturday attack a Best Western Premiere hotel in Petion-Ville, one of the capital's wealthiest neighborhoods. Guests were forced to remain inside as rocks were hurled through windows.

Demonstrators burned tires, looted shops and set cars on fire in the capital, Port-au-Prince, according to radio broadcaster Metropole.

Later, the local HPN news agency reported that at least seven people had been killed. Police also spoke of casualties but did not mention any figures.

Government officials agreed to reduce subsidies for fuel in February as part of an assistance package with the International Monetary Fund. The agreement also included increased spending on social services and infrastructure and improved tax collection in an effort to modernize the economy of one of the poorest nations in the Western Hemisphere.

Information for this article was contributed by Denis Duettmann of Deutsche Presse-Agentur.