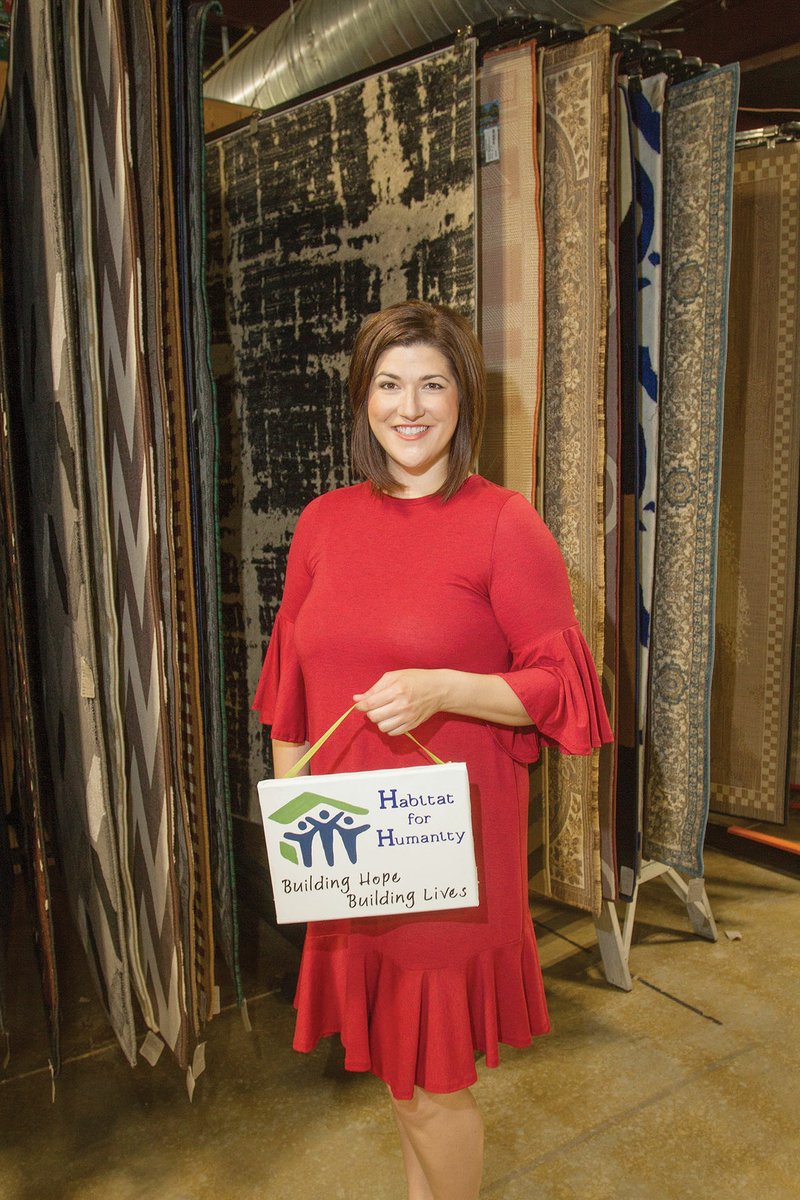 Angela Connell stands near area rugs in the back of the Habitat for Humanity of Independence County retail store in Batesville. Connell was hired as executive director for the local Habitat branch in March. She is a 2002 graduate of Batesville High School.

Angela Connell said she has always been drawn to working with nonprofit organizations.

Connell, 34, as executive director of Habitat for Humanity of Independence County in Batesville, is still getting that wish fulfilled. She took the position in March, replacing Shalyn Carlile, who is still a member of the Habitat board.

Habitat for Humanity is a nonprofit organization that helps families build and improve places to call home. The Independence County chapter was established on July 1, 2007.

Prior to coming to work for Habitat, Connell worked for Stone Ward Advertising in Little Rock.

“I’ve always seemed to be drawn to nonprofits, even at Stone Ward,” Connell said. “My main client that I worked to promote during my time was the Arkansas Arts Center. I also worked with an up-and-coming nonprofit called Carry the Load. It was founded by military veterans to bring back the true meaning of Memorial Day.”

Memorial Day has a special meaning for Connell.

“As the daughter of a Vietnam veteran, you can imagine how proud I was to help in any way that I could,” she said. “I guess it’s just rewarding, knowing that I’m helping in some small way these groups that are doing really fantastic things in their own respective ways and bettering the community, whether through enriching our lives through arts, reminding us of the sacrifices made on our behalf or even serving some of our most basic needs.”

Connell is a native of Independence County. She grew up in the Bethesda community, just west of Batesville.

Connell graduated from Batesville High School in 2002 and attended Arkansas State University in Jonesboro, where she earned a bachelor’s degree with a major in journalism and public relations and a minor in interdisciplinary family studies.

Connell married her husband, James, in August 2007 after graduating from ASU in May that year.

“Shortly thereafter, I worked in the marketing department at Bad Boy Mowers, did freelance writing for [the University of Arkansas Community College at Batesville] and then went on to serve at the Batesville Area Chamber of Commerce as the membership director.”

“I continued to work from home for Stone Ward until my husband and I grew our family in 2015,” Connell said. “My son, Jackson, was born in April 2015, and I’ve had the privilege of staying home with him until earlier this year. We welcomed our daughter, Madison Claire, in January this year.”

Connell said that even though she was out of the workplace for a while after having her son, she believes her previous work experience has prepared her for Habitat.

“I feel like everything I’ve work on previously has just prepared me well for this role,” she said.

“I will say that sleep is more of a concept at my house with a 5-month-old and a 3-year-old. I would say my only challenge so far is running on very little rest. It’s a good thing they are so darn cute,” she said about her children.

Thomas Showalter, chairman of the Habitat board in Independence County, said Connell is “doing a fantastic job so far.”

“She’s getting more involved in the community, trying to find more local partner families and trying to find the right people who would qualify for our type of homes that we do for people,” Showalter said. “When it came down to it, she felt like to us that she was the right person for the job. She had some stuff in her background and her resume that really worked with this job. We felt like she was the right type of person for it.”

As the executive director for Habitat, Connell said, she has a lot of duties, including the following:

• Board and committee administration: She ensures that the board is kept fully informed and works to promote engagement of members.

• Community and public relations: She is a spokeswoman to religions, businesses, civic and volunteer organizations and attends community networking events.

• Retail support: She is in charge of general store oversight and store reporting.

• Human resources: She oversees all personnel, keeps policies and procedures up to date and trains employees on such, and motivates and educates staff on the mission of Habitat.

• Administration: She administers day-to-day affairs of affiliates and duties as assigned by the board.

Connell said working for Habitat has a lot of responsibilities with it.

“Along with our board of directors, I’m responsible for the overall vision and direction of our affiliate,” she said. “I hope to always be the strong advocate who ensures our group’s ability to continue serving families right here in need of simple, decent, affordable housing.”

“Our affiliate takes a lot of time to get to know and work with the families who work toward home ownership,” Connell said. “These families accumulate work hours through sweat equity that count toward their mortgage by volunteering [to work] not only on the actual home they build but also on partner family homes. Habitat’s path to homeownership is an important and in-depth process, requiring hard work, time and dedication. But this helps to ensure the long-term success of Habitat owners.

“We are currently searching for partner families to serve.”

Connell said Habitat builds one house a year. The current client is Ecko King, who is a Habitat store employee in Batesville. King has three children.

“Her youngest, Easton, 2, has spina bifida,” Connell said. “It will be the first Americans With Disabilities Act-compliant house that our affiliate has built in the county. We usually work on the house on Saturdays and will be framing this weekend. Volunteers are welcome and encouraged to help. We usually go to have doughnuts for breakfast, and lunch is provided.”

In addition to the building of houses, Habitat also has a retail store at 88 Batesville Blvd. in Batesville.

“Our Habitat Home Store not only helps the community, but it’s also a destination for thrift shoppers and those with home-improvement projects on a budget,” Connell said. “It’s a great asset to our affiliate in that [the store’s] proceeds support our mission and home builds and provide jobs and volunteer opportunities.”

The store is open from 9 a.m. to 5 p.m. Monday through Saturday.

“The helpful and friendly staff is happy to accept donations,” Connell said. “For after hours, we do have a donation box located in front of our building.”

Growing up in Batesville gives Connell a special connection to the community, she said.

“We are a small community,” she said. “Odds are if I don’t know someone personally, I probably know someone in the family, an acquaintance at least. Having that familiarity only helps me be better equipped to do my job.”

Connell said her previous work experience is something that is helping her in her new role with Habitat.

“I feel that each experience that I’ve had leading up to my new role with Habitat has added to my education and equipped me with the knowledge and skill set necessary to best carry out the job duties expected of me,” she said. “The position requires a lot of different hats, and I tend to thrive in that environment. Most importantly, my faith tells me that I’m right where I am needed.”