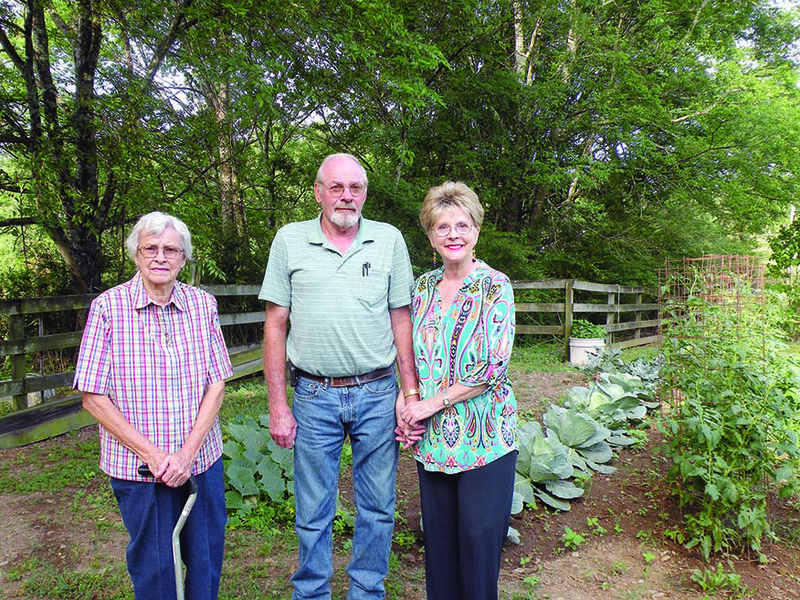 The James Parker family of Red Oak is the 2018 Garland County Farm Family of the Year. The family includes James, center; his wife, Joy, right; and his mother, Opal. The family raises cattle and hay.

RED OAK — James and Joy Parker, both 69, have been named the Garland County Farm Family of the Year. They raise cattle and hay.

“It’s an honor to be named Farm Family of the Year,” said James, who is also a carpenter, “but I think there are a lot of people more deserving than I am.

James’ mother, Opal Parker, who lives nearby, said, “I think James deserves the farm-family honor. I know how hard he works. Joy works hard, too.”

Joy said Opal “is the glue that holds the family together.”

James and Joy, who owns and operates the Gently Worn Resale Shop in Hot Springs, have been married 20 years and have a blended family.

Their son Brett Parker, 49, is a carpenter in Hot Springs and has one daughter, Morgan, 8.

Their son Derek Parker, 47, is an interior designer in Shreveport, Louisiana.

Their daughter, Shawna Vaughan, 50, and her husband, Jerry, live next door to the Parkers, and she helps Joy with the resale shop. Shawna has three grown sons — Cash, 31, who travels with the racing industry; Chase, 25, who lives in Oklahoma City with his wife, Kayla, and their 4-year-old daughter, Avery; and Caden, 20, who is a student at Henderson State University in Arkadelphia.

James is a graduate of Lake Hamilton High School and attended one year of college at Henderson State University.

“I quit college and went to work as a meat cutter,” he said. “Then I started doing carpentry work in 1973 and have been doing it ever since. I’ve built many houses in the area. I just like working with wood.”

James has been farming for 24 years. His grandparents, the late Jeff and Alta Parker, started the family farm, which was a dairy farm, in 1942.

“I grew up on the farm,” James said. “I bought my first heifer when I was in the seventh grade. It was a Holstein heifer that I bought from my grandfather. I milked her for a couple of years, then sold her back to my grandfather. During my high school years, I helped haul hay in the summers.

“Joy was a farm girl,” he said, smiling. “We actually started out our herd by feeding a calf on a bottle.”

Joy grew up in Stilwell, Oklahoma, a daughter of the late Hank and Opal Eversoll. She has a twin sister, Jan Adair of Stilwell; an older sister, Pat Worth of Spokane, Washington; and a brother, Ted Eversoll of Stilwell. Joy is a registered nurse and received her nursing degree from Westark Community College, now the University of Arkansas-Fort Smith.

“I never practiced nursing,” Joy said. “I went to work for the University of Arkansas in continuing education in Hot Springs, dealing with rehabilitation programs. I did secretarial work there for six years, then bought the resale store.”

“I bale hay to sell, as well as feed our own cattle,” he said. “We custom-cut and bale hay for several other farmers in the county.”

James tries to keep his farm equipment in good shape.

“Most of our equipment is three to five years old,” he said.

“The biggest problem we have is weed control,” James said. He said he fertilizes the pastures yearly and uses herbicides to help control the weeds.

“These products (herbicides) work well, but it is a continuous problem,” he said.

James said he would like to increase the family’s herd of cattle by 25 to 30 head.