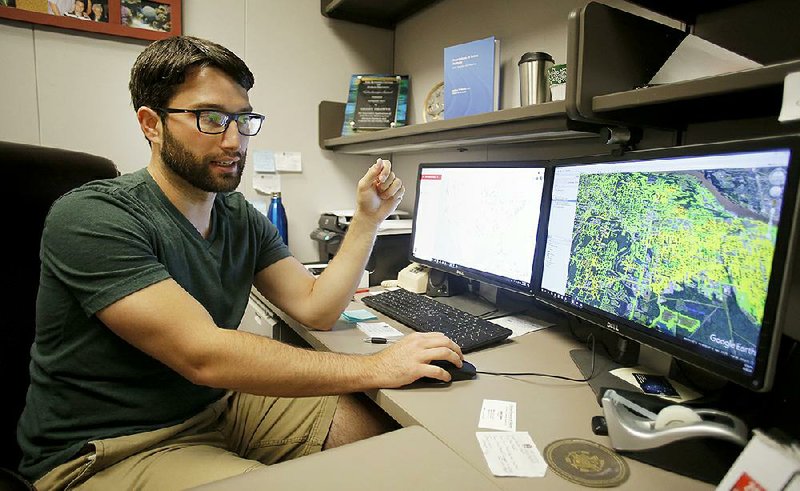 Grant Drawve looks over an aggravated assault risk terrain map of the city of Little Rock in his office on the University of Arkansas, Fayetteville campus. UA researchers, among others, are mapping where terrorist attacks have been planned in the United States.

FAYETTEVILLE — The search is on for patterns in U.S. terrorism as part of federally funded research at the University of Arkansas, Fayetteville.

Ultimately, Drawve said, there’s another question he and fellow researchers hope to answer by developing a data-based model that will map and find commonalities of planned terrorist attacks: “Can we predict some of these?”

Brent Smith, director of UA’s Terrorism Research Center, is the lead investigator for the three-year project funded with a $716,000 grant from the National Institute of Justice.

The center, created in 2003, keeps track of FBI terrorism-related investigations, breaking down cases into descriptive bits of information that can be studied for patterns, Drawve said.

For example, researchers can sort incidents by the type of target location, showing when and where government buildings have been targeted, Drawve said. He said the study will make use of additional data sources.

Smith referred questions about the study to Drawve, a specialist in data analysis. The center’s American Terrorism Study includes data on federal terrorism cases going back to 1980, according to the university.

Drawve said researchers have been using statistical methods to try to find patterns in things like the distance between target locations and the homes of terrorist plotters, as well as the location of any “precursor events,” such as weapons testing or strategy sessions.

Drawve said the American Terrorism Study includes about 575 U.S. terrorism-related occurrences or planned occurrences, as many were planned attacks never actually carried out, plus about 4,300 “precursor events.”

The terrorism study will use techniques that draw from “human ecology,” or “how people operate in space,” Drawve said.

The specific data analysis method is called Risk Terrain Modeling, which Drawve said involves “trying to diagnose those physical features of the environment that correlate or relate to criminal activity.”

When studying crime patterns in cities, such features can include convenience stores, vacant lots, laundromats and liquor stores. Or sidewalks and parks.

Using statistical methods, the combination of such features are studied “to see how those relate to crime occurrence,” Drawve said.

The method can be expanded, Drawve said, to include nonphysical features of an area, like gathering from the U.S. Census Bureau details about “the social structure of a neighborhood.” He mentioned the American Community Survey as a data source, described by the bureau as providing “detailed population and housing information.”

Andrew Guthrie Ferguson, a professor at the University of the District of Columbia David A. Clarke School of Law who is not involved with the study, said in an email that Risk Terrain Modeling “has real promise when it comes to forecasting criminal risk.”

Ferguson wrote about what are known as predictive policing models in a 2017 book, The Rise of Big Data Policing: Surveillance, Race, and the Future of Law Enforcement. He said he has worked as an unpaid, “informal” consultant on a different federal grant related to Risk Terrain Modeling, sometimes shortened to RTM.

“What I like about RTM is that they ask ‘the why’ question of ‘why’ crime might be occurring at a particular place and then offer solutions that try to fix the environmental risk factors that address the ‘why,’” Ferguson said. “This is different than other predictive policing technologies that do not focus on understanding what the data is telling them.”

Ferguson said he was unfamiliar with the technique being used in terrorism research and added that he has “a bit of skepticism,” stating that a concern for “better political optics” and “grant opportunities” tend to drive the use of predictive analytics to study terrorist activities.

“But, I guess all [the National Institute of Justice] did is fund a study to see if they could find a pattern. I will be interested in the results,” Ferguson said.

Ferguson has written about how some uses of predictive data in policing raise concerns about bias.

Drawve said the terrorism study, when studying target locations for terrorist attacks, will consider the characteristics of people living in a neighborhood or area. This analysis likely will include what percentage of people were born outside the United States, Drawve said, listing an example of what is known as socio-demographic data.

Groups including the American Civil Liberties Union have at times expressed concern about improper police surveillance of Muslim communities in the years after the Sept. 11, 2001, terrorist attacks.

Drawve said religion is not part of the study, apart from whatever may relate to the ideology behind terrorism, and he noted the range of motivations behind U.S. plots that have included attacks on abortion clinics and environmental targets.

He said the question will be, in looking at neighborhoods or areas, “Is there something different socio-demographically that makes it more of a greater likelihood of a target location being there?”

But the major part of the study, the spatial analysis, will focus on factors like distance traveled by plotters to target sites, Drawve said, also giving an example of trying to understand where — and why — plotters travel before an attack for “precursor events.”

“If they’re choosing to go to a certain place, something for them has reasoning for that. And can we find patterns across different incidents for that?” Drawve said.

“It’s a rare event,” Drawve said. “So to try to predict or, say, mitigate a number of events is tougher, because there’s just not as many as say, street robbery.”

A terrorism expert not involved with the study, Brian Michael Jenkins, senior adviser to the president of Rand Corp. and a research associate at the Mineta Transportation Institute at San Jose State University in California, said that in the United States “in terms of jihadist terrorism alone, we’re talking since 9/11 of fewer than 30 attacks over a period of nearly 17 years.”

Jenkins said that “the question is, do we have enough events to begin to approach confidence in the results of quantitative research?”

Drawve said that along with a better understanding of terrorist attacks in hopes of preventing them, the study also could help identify places and buildings that need the most protection.

The research underway at UA is unique, Drawve said.

“We thought, why don’t we sit down and try to do it and test it, to see if we start to find those patterns, spatial patterns across the U.S.,” Drawve said.

Drawve studied criminology as an undergraduate and graduate student at Southern Illinois University before in 2015 earning a doctorate in criminal justice from the University of Arkansas at Little Rock.

He joined the UA faculty in 2016 after a year working as a postdoctoral researcher at Rutgers University, where the statistical techniques known as Risk Terrain Modeling were first developed.

Two Rutgers professors, Leslie Kennedy and Joel Caplan, are working with Drawve and Smith on the terrorism study, as is Jeff Gruenewald, an associate professor at Indiana University-Purdue University Indianapolis.

Drawve said police commonly use some form of data analysis to make decisions about where to send resources, although it’s less common to make use of Risk Terrain Modeling or similar data techniques.

He said he thinks there will be a steady growth of users.

“I think there’s going to be the expectation of, if you’re sending police to an area, why?” Drawve said, adding that “gut instinct only gets you so far.”

In general, “we know crime is not random and it clusters in space, and, over time, you can start to predict that.”

Drawve said a project he worked on while at Rutgers University with police in Atlantic City, N.J., showed it could work when backed up with action taken by police and other city agencies.

“We saw arrests going down with crime going down, which is what you hope to see,” Drawve said.

Drawve said he’s also interested in using the method to study noncrime topics, such as suicide and child maltreatment.

Ultimately, the method can be thought of as another tool for understanding multifaceted issues, Drawve said.

“Any type of outcome, be it a crime or terrorism or any public-health issue, it’s understanding what contributes to that,” Drawve said.