On your SIDE! We have met the enemy that’s hogging all the River Trail, and he is us. 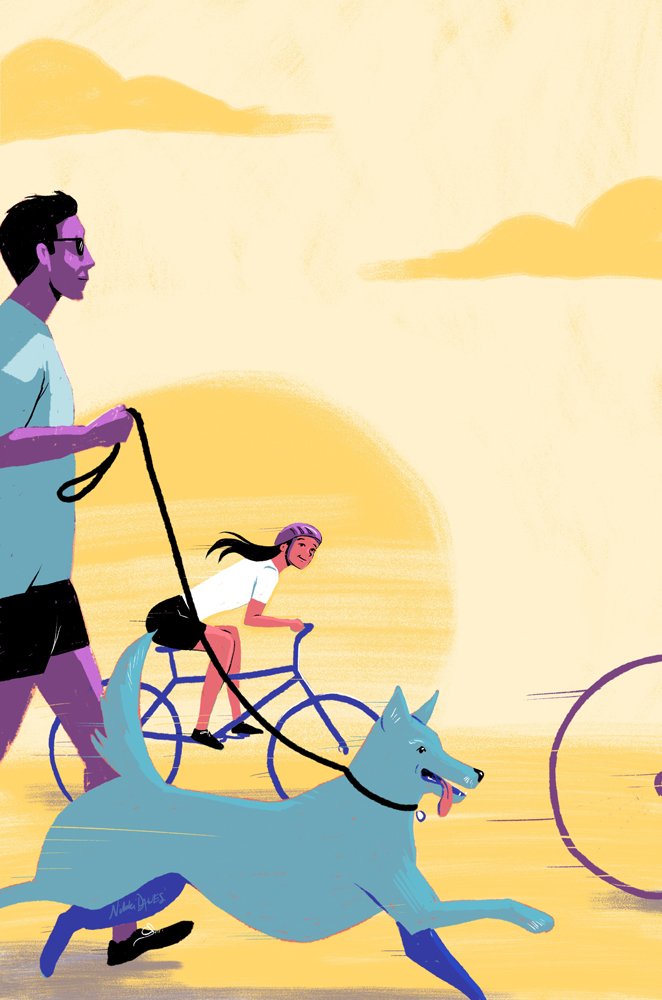 I love Little Rock. Before I moved here more than 16 years ago, I took one of those computer tests that reveal where you should live. Out of all the cities in the country, the computer gods picked Little Rock for me.

I lived in Fayetteville at the time and thought my husband-to-be had rigged the test since this was where he lived. But in retrospect, I think it was probably the questions pertaining to woods, water and trails that clinched it.

So, loving woods, water and trails, it's no surprise that I love my bicycle, too.

I received a great new bike a couple of years ago from aforesaid husband -- a Cannondale Quick. Much better than the Pee-wee Herman-esque model I had before. That one was great -- had a cushy seat that left me, after 100 miles on the Katy Trail in Missouri, the only one of my group not hobbling. But it was definitely dorky -- and heavy. One friend said my riding posture reminded her of the wicked witch from The Wizard of Oz. All I was lacking was a wicker basket and Toto.

I hope I'm less goofy-looking now, and the ease of my bike and the proximity to trails in this city make me a regular -- particularly the trails east and west of the Big Dam Bridge and the Two Rivers Park Bridge, on both sides of the river.

Most of the time.

It seems there are four types of cyclists on the paths in the capital city. The first is a serious athlete. He or she is out there to get the heart rate going and add miles to the odometer -- along with bragging rights, maybe. As in, "Yeah, I hit the 3,000-mile mark for this year and it's only June."

I have a love/hate relationship with these athletes.

They usually do not acknowledge those they meet on the trail, and they have spanky little outfits and bikes that weigh 2 ounces. (I think I might concede the lighter weight is very, very good.)

The second class of cyclist is a more casual rider -- and a greeter. These folks are a bit older, not so much in a hurry and not quite so bent over the handlebars.

They still get a pretty good speed going, but that doesn't prohibit them from a nod, finger wave or a "good morning" as they pass.

The third group consists of young adults who see you taking a break and think you are old and having a stroke. "Everything OK?" they ask. "Just making sure." I must look like I need paramedics after riding 18 miles.

I'm fine with all these types. I've been all of them at one time or another (except for the spanky outfit and 2-ounce bike).

The fourth group -- cyclists who come close to ruining my ride -- are the ones who come up from behind, usually topping 17 mph on the bike path, with no warning other than my peripheral vision and a noisy wind stream.

Bad words spew involuntarily from my mouth as I veer all over the path. I usually have to yell a warning to my biking partner ahead because he's often in his own world. I offer "On your left!" as loudly as I can, and even then, I see the scene repeated: bad words, crazy wobbles. It would be funny if it weren't so maddening and dangerous.

When we bike, we try to stay to the right. We try to follow the signs on the pavement, even if we occasionally read them backward or upside down ("traffic merging to yield"). We pull completely off the path when we stop for a rest, a drink or to watch the pelicans on a dead log in the river.

We try not to hinder anyone else's enjoyment of the activity because we're slower or bulkier or whatever.

We do yield to traffic coming off the Big Dam Bridge, and we (usually) don't sing out loud, carry on loud business conversations using Bluetooth nor listen to podcasts on speakers. Shoot, we rarely even ride side by side.

Perhaps I'm not up on current cycling etiquette, and I really don't want to be whiny, but I thought "on your left" was as universal as "please" and "thank you," a common courtesy to warn fellow cyclists, walkers or joggers who might be slower that you are passing fairly close and fairly quickly.

One weekend recently, my inner Miss Bike Manners had had enough.

Actually, we rarely ride on the weekends. Retirees have the option of a weekday here and there, so we try to leave weekend room on the trails for those who have no other free time. But a moment of insanity and cabin fever took us to Two Rivers on a Saturday morning.

The path was crowded with strollers and hand-holding couples. Families on bikes of all kinds and sizes. One little guy had his training wheels on and was riding a two-wheeler for the first time. Sheer joy burst out of him as he squealed and careened down the hill just beyond the concrete stanchions that mark the beginning of the trail.

Everyone around stopped, watched and grinned.

Dogs were all over the place with owners trying hard to rein them in. Joggers, walkers, cyclists, deer ... we were all enjoying the hubbub of it.

And then in the middle of all this controlled chaos came not one, but two, tandem bikes riding side by side, slithering at a pretty quick clip in and out of all the rest of us. Four cyclists (yes -- with spanky outfits) on two bikes.

Pedestrians, dog-walkers and other cyclists were catapulting in all directions trying to control their own rides, snatch their children and corral their pups to avoid untimely deaths under spiked pedals and spokes.

And to add to the totally egocentric enjoyment of the oblivious quadruplets, another cyclist was riding alongside with a cellphone extended, catching the whole ride, probably destined for YouTube.

It was a novel idea, indeed, and it might have been OK with the rest of us -- maybe even amusing -- if we had heard one single "on your left."

It left us all grateful there was nothing more than a skinned knee or two as children got up and parents brushed them off. No real harm, no real foul.

And then, a few weeks later, on the north side of the river, a young man in madras shorts, a white, v-neck T-shirt and no helmet came barreling past, narrowing the air between us to a few inches it seemed. Scared the poop -- and a few choice words -- out of me.

Of course I yelled "on your left" to my husband ahead, and he had a few choice words of his own, because my shout was not really in time.

Unbelievably, the young man turned around and yelled back at us, "Stay to the right!" and sped on.

I was, however, still a little miffed on the way back to Cook's Landing and was stewing about whom to call. Two crazy incidents within a matter of days.

And then, the woods, water and trails worked their magic. It was such a beautiful day, and my bike makes it so easy for my 63-year-old heart, lungs and muscles to do their best.

It was just not worth it to dwell.

I told myself to take "share the trail" to heart -- that means with folks I would like to know and those I hope never to see again. Sweetie-pies just getting their training wheels, the dog walker whose goofy Lab decides to lope after the deer right across my path, new moms walking four-across, trying to get their bodies back by pushing those double-wide strollers and dancing to Bruno Mars so loud I can hear it 10 feet away.

It means share the trail with tandem trail hogs and brash young men who feel the need to shout at grandmothers -- and once I buy into that, the bad words evaporate and my indignant bike-police person inside disappears. The breeze, the pelicans and the summer-scented mimosa grotto on the trail between the Big Dam Bridge and Two Rivers Park are the only things that matter.

The madras-clad young man becomes a part of it all, too, and I can live with that.

(But I will probably still yell an epithet or two if I don't hear "On your left.") 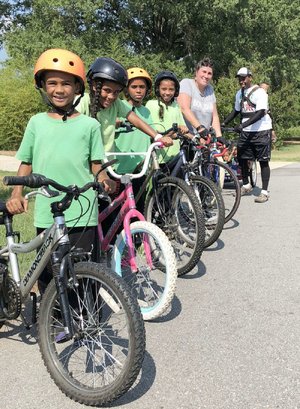 Photo by Celia Storey
When Aaron and Amalia Agnew take their kids biking on the River Trail, they do their best to stay to the right, because they travel slowly and stop often. And they like to be polite. On July 4, Amaris, 7, is the leader, followed by Anaiah, 8; Aaron Jr., 10; Adalia, 11, and Mom. Aaron brings up the rear with 1-year-old Amoz on his back and Amon, 3, and Attai, 5, in the trailer attached to Dad’s bike.

Print Headline: On your SIDE! We have met the enemy that’s hogging all the River Trail, and he is us.