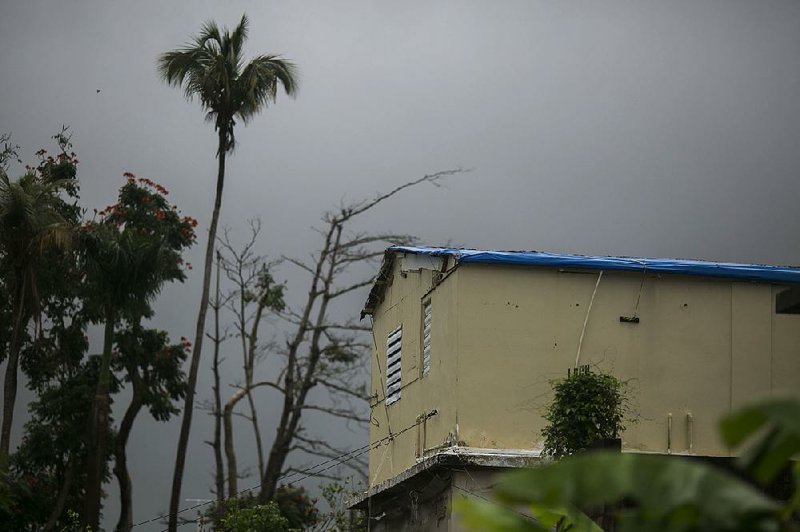 A tarp serves as the roof of a home in Yabucoa, Puerto Rico, that was damaged last year by Hurricane Maria. The remnants of Tropical Storm Beryl passed over the region Monday.

Tropical Storm Beryl disintegrated after rushing over Dominica and into the eastern Caribbean, but the U.S. National Hurricane Center said the remnants still could bring 2 to 3 inches of rain pounding down on homes in Puerto Rico still damaged by September’s Hurricane Maria.

Forecasters said this could unleash flooding and landslides in Puerto Rico and the U.S. Virgin Islands.

By noon, Puerto Rico had already begun to feel the effects of the storm. Some rivers had started to flood, Lt. Gov. Luis Rivera Marin told the Miami Herald. The island had also begun to see mudslides in rural areas, he said.

Officials said 24,000 customers had lost power across Puerto Rico, and Gov. Ricardo Rossello urged people without sturdy roofs to move in with relatives or go to one of 14 government shelters that have opened.

Some 60,000 people in the U.S. territory still have only tarps for roofs blown off by Maria, and more than 1,500 customers are still without power more than nine months after the storm.

The Category 5 hurricane caused more than an estimated $100 billion in damage, killed dozens of people by the most conservative estimates and destroyed up to 75 percent of Puerto Rico’s electricity transmission lines.

The National Weather Service issued an alert warning that heavy showers and winds of more than 50 mph were approaching Puerto Rico’s east coast Monday morning. The storm’s center was expected to pass just south of the island.

Puerto Rico declared a state of emergency Friday and urged people in flood-prone areas to seek shelter. Officials opened 28 shelters ahead of the storm with a capacity for 106,000 people. By Monday afternoon, however, only 20 people were in the shelters, Rivera Marin said.

Although local officials are remaining vigilant, Rivera Marin said he was grateful the storm had weakened as it approached Puerto Rico. “I thank God that this didn’t arrive and make landfall as a hurricane in the island especially when the route that was forecast had it making landfall in the same region that Maria hit us last year,” he said. “That would have been devastating for us.”

Marshall Alexander, with Dominica’s Meteorological Service, said no landslides or widespread flooding have been reported. A curfew also has been lifted.

“Definitely, we were spared the worst,” he said.

The storm was expected to pass just south of Puerto Rico, which could see sustained winds of 15 to 25 mph and gusts of up to 50 mph, forecasters said. It also dumped torrential rain in the U.S. Virgin Island of St. Croix, with the National Weather Service warning of high winds and fallen trees and light posts.

Meanwhile, Tropical Storm Chris was squatting on Monday about 215 miles off the coast of the Carolinas. Forecasters expect it will gain hurricane strength before moving up Gulf Stream waters on a path that could cause life-threatening surf on East Coast beaches this week.

Chris had top winds of 60 mph Monday morning, and was expected to remain nearly stationary through today before moving northeast as a hurricane.

Information for this article was contributed by Danica Coto of The Associated Press; and by Alex Harris and Kyra Gurney of the Miami Herald.