MOVIE REVIEW: 'Leave No Trace' shows us that human beings — flawed and misguided — have an instinct for decency 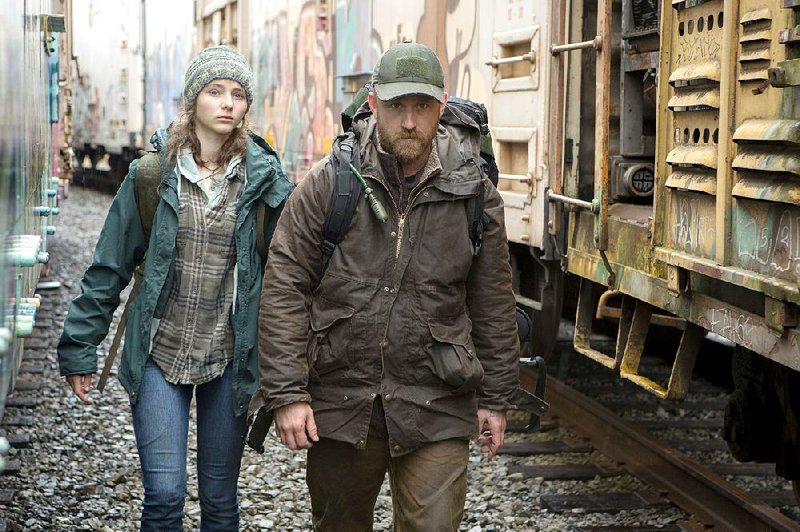 Tom (Thomasin McKenzie) and her father Will (Ben Foster) are homeless but self-reliant people who get caught up in a bureaucracy that turns out not to be faceless in Debra Granik’s Leave No Trace.

Debra Granik's latest movie Leave No Trace opens in the braky, lush and verdant jungles of Oregon. A man and a girl are camping, going about essential tasks with wordless efficiency. He splits wood for a fire with a camp shovel, she uses a knife to carve curls on feather sticks. They forage for mushrooms, boil eggs, capture rainwater for drinking. They play chess. Somehow it emerges that they are not just here for the weekend, that they are homeless in paradise.

Will (Ben Foster) is the father; Tom (Thomasin McKenzie) is his daughter. She is 13, a little younger than we might have taken her for at first. We might have mistaken the pair for a couple, but within a few moments the dynamic materializes. There is honor in Will, and Tom is a respectful daughter who obeys and trusts her father. They are odd, but not feral. For some reason they have removed themselves from the grid, taken themselves off the board.

Rating: PG, for thematic material throughout

Or rather Will, as the head of what's left of this family, has. He has abandoned civilization. He has something hurt and furtive in his eyes, and going into Portland -- it turns out they are camping in an urban park -- to buy supplies is difficult for him. There is noise, and proximity to others. There is dread.

He finances his sorties by selling the medicine he receives to treat his PTSD to a fellow vet who lives rough but social in a kind of hobo camp. The pills don't do Will much good anyway; they don't stop the nightmares.

The idea is to remain invisible, but Tom doesn't. A jogger in the park spots her; soon the authorities move in. Will and Tom hide but are sniffed out. They can't sleep in the park. It is against the law.

They are anxious at being separated, but the authorities are kind and reassuring. Both Will and Tom are given tests, and while he struggles with a 432-question psychological resilience battery, she's scoring above her grade level. But school isn't just about academics, social worker Jean (an excellent Dana Millican) tells her, it's about socialization as well. While it's no crime to be "unhoused ... a lot of people are these days," her dad really needs to get her indoors, to get her into school. They need to assimilate.

This insistent kindness is one of the remarkable things about Leave No Trace. The bureaucracy may be broken and inefficient, but it isn't faceless and cold. It's studded with human faces, staffed by people doing their best to help with difficult situations. It's not important to them -- or to us or to Granik and her co-writer and producer Anne Rosellini -- how Will and Tom came to be living in the woods. What's important is that their needs are met going forward.

And so the second act finds them set in a modest but charming little house. It's furnished, there are groceries in the refrigerator. Will and Tom are at loose ends, not having to scrabble to subsist. Maybe they can relax?

"We can still think our own thoughts," her father replies.

The house is being provided by a benevolent rancher who grows Christmas trees and could use Will's help. Will would rather work with the horses than shoulder to shoulder with other people, but the rancher doesn't know him well enough to allow that just yet. Besides, there are trees to be harvested. Meanwhile, Tom makes friends with a boy (Isaiah Stone) who raises rabbits and is building his own tiny house. He shows her where the sink will be, where he'll stand while he's doing dishes and look out through a window at the wild world outside.

You can feel Tom being pulled into society, into the world of people. She learns to ride a bike. She even gets Will to attend a church service. She's amused by it, but we can feel him pulling back. All this makes him nervous. A helicopter bats the sky above the ranch. He needs to leave.

He wakes Tom in the middle of the night, tells her to pack, to take only what is essential. She holds a model horse for a moment, before putting it down on the dresser. It stays.

They move, forced by Tom's paranoia. A bus, a hopped freight train, an earnest truck driver who takes Tom aside before he agrees to give them a ride. He's your dad? "I just need to be sure I'm doing the right thing."

Granik is a humanist, which means she likes us -- she believes human beings, as flawed and misguided as they might be, have an instinct for decency. She approaches Will and Tom not as victims or noble savages but as parsable, complicated people with limited resources and problems that may be difficult to resolve. Will is not equipped to be the best parent, wants what's best for Tom, he wants to protect her. But he has his limitations, which Tom is slowly beginning to come to grips with.

So maybe what happens in the third act, when Tom takes over as the adult and rents a trailer from yet another decent person (the always welcome Dale Dickey, in a much more genial role than the one she played in Granik's 2010 feature Winter's Bone), is inevitable. Maybe it's even for the best.

This is a much less violent and sensational film than Winter's Bone, it veers more toward unhurried, understated European-style realism. As such, one wonders whether it will make much of a dent in the marketplace. Maybe it won't, but there isn't a false note in the film. Foster, a performer who sometimes tends to entertainingly febrile readings, is subtle, precise and tightly wrapped here. McKenzie, a 17-year-old New Zealander, is a revelation: Her performance has engendered speculation that this film might do for her career what Winter's Bone did for Jennifer Lawrence.

While some audiences might be underwhelmed by Leave No Trace, it's a masterful piece of cinematic art that drills down into an invisible part of America. Granik is generous but unsentimental; allowing every character, no matter how minor or briefly glimpsed, a measure of dignity. No one -- not even a leotarded Christian dance troupe called For Your Glory -- is made to seem ridiculous.

Granik is the sort of vital, visionary filmmaker we need now, though she gets to think her own thoughts. After the triumph that is Winter's Bone, she made a documentary, 2014's Stray Dog, that focused on Ronnie Hall, a Vietnam veteran and biker who had a small but pivotal role as a malevolent clan chief in Winter's Bone. The film peeled back the layers on the superficially scary Hall, revealing his to be a working-class Buddha more concerned with honor and duty than any sort of material success. He helps people. He is kindly to those who can't pay the meager rent he charges; he arranges dentist visits and fixes rotted floors.

Print Headline: The kindness of strangers; Leave No Trace shows us that human beings — flawed and misguided — have an instinct for decency