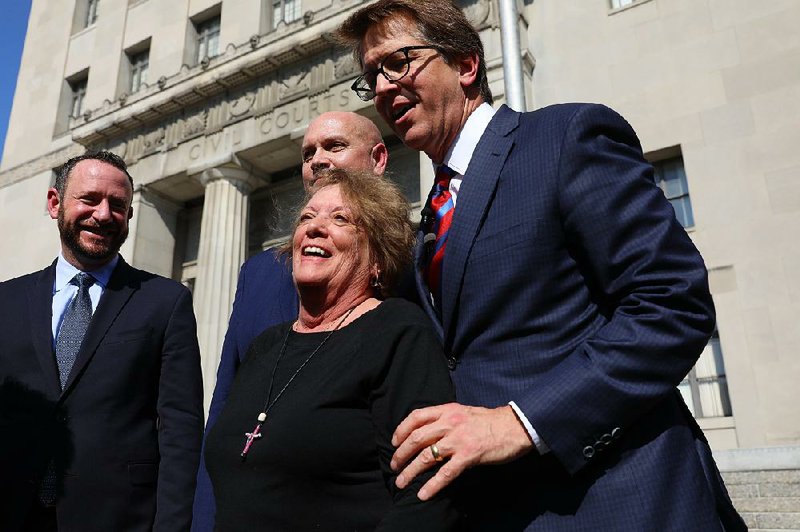 Plaintiff Gail Ingham stands outside a St. Louis courthouse with the plaintiffs’ attorneys after Thursday’s decision in a lawsuit that blamed 22 women’s ovarian cancer on asbestos in Johnson & Johnson’s talc products.

Johnson & Johnson should ready itself for a flood of new lawsuits after a jury ordered the company to pay $4.69 billion to 22 women who blamed their ovarian cancer on asbestos in its talc products, legal experts said.

There are already more than 9,000 suits claiming talc-based baby powder causes ovarian and asbestos-specific cancers. That number is likely to jump in the wake of the Missouri jury's decision, said Elizabeth Burch, a University of Georgia law professor who teaches about mass-tort law.

The jury on Thursday awarded $550 million in actual damages and $4.14 billion in punitive damages.

It's not just because of the size of the award -- the biggest of 2018 and the sixth-largest product-defect verdict in U.S. history -- but the evidence that was presented at trial: internal documents that show company officials were aware for more than 30 years there were at least trace amounts of asbestos found in different batches of the talc used in its baby powder.

"The floodgates were already open on this issue, but this verdict breaks the dam," Burch said in an interview Friday. "It's going to be difficult for J&J to say" going forward there's no asbestos in its talc products, she added.

While Johnson & Johnson has fought suits blaming cancer on its baby powder in the past, investors haven't reacted to courtroom losses. Given the size of the award and that it came out of the first trial test of claims of an asbestos-ovarian cancer link, investors are likely to increase their focus on the talc cases on the heels of the large award for the plaintiffs, according to Credit Suisse analyst Vamil Divan, who has an outperform rating on the company's shares. Divan said he is confident J&J can absorb "even relatively large payments" to resolve the cases.

Even so, shares fell as much 1.9 percent on Friday in New York trading the morning after the verdict. At closing, the stock was down 1.4 percent to $125.93.

The women contend they were exposed to asbestos by inhaling the powder or using it on their genitals. More than 20,000 ovarian cancer cases are reported annually in the U.S., according to the National Cancer Institute. More of those cases are likely to be translated into suits given the headline-grabbing nature of the verdict, Burch said.

The company issued a statement Thursday faulting the jurisdiction and pointing out that many of the 22 women weren't from Missouri, so they shouldn't have been allowed to join the St. Louis case. Johnson & Johnson said it plans to appeal.

The products don't contain asbestos and don't cause ovarian cancer, company spokesman Carol Goodrich said, predicting a reversal. "The multiple errors present in this trial were worse than those in the prior trials which have been reversed."

Johnson & Johnson "will appeal till the cows come home, or until all the plaintiffs die," plaintiffs' lawyer Mark Lanier said Thursday. The company should pull its talc-based products from the market or "mark it with a serious warning," he said. In May, a California jury asked a judge in another talc case if it could force Johnson & Johnson to add a warning to its white baby-powder bottles that the product may contain asbestos. The judge said that wasn't in jurors' power.

"This was a new theory and the jury lined up behind it," said Jean Eggen, a Widener University law professor who teaches about mass-tort cases. "That may be a harbinger of things to come and there are many more ovarian cancer cases than asbestos cases tied to the powder."

The verdict could spur Johnson & Johnson to start thinking about settling the talc cases, Holly Froum, a Bloomberg Intelligence analyst, noted in a report to clients. She says the settlement value of the cases could reach as much as $20 billion.

But the company has traditionally been loath to settle big cases without allowing the appellate courts to have their say. That's helped in St. Louis, where it's faced multiple trials over ovarian cancer claims. It lost four of the first five to go to trial. Two losses were later overturned on jurisdictional grounds that a U.S. Supreme Court ruling barred the women from suing somewhere where they have no ties. The other two are on appeal on the same grounds.

The company has also had a better record with judges than juries in the ovarian cancer cases. A separate plaintiffs' award, for $417 million by a Los Angeles jury in August, was reversed by the trial judge who decided evidence didn't support the verdict. A New Jersey judge in 2016 stalled lawsuits in that state by tossing two cases set for trial, also finding a lack of scientific evidence.

Information for this article was contributed by Tim Bross of Bloomberg News.