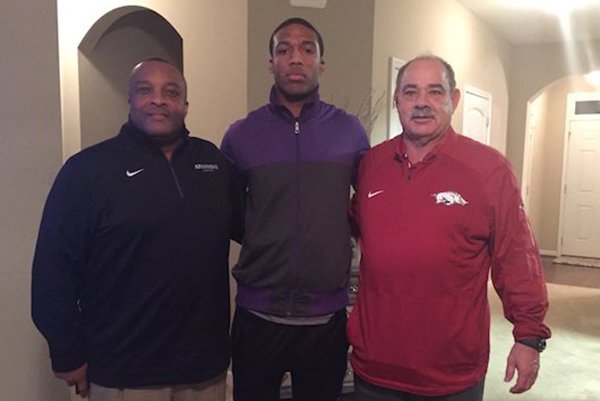 The envy of any other 17-year-old, Myles Mason had options.

And options within his options.

Myles Mason at a glance

NOTEWORTHY Played in the Offense-Defense All-American Bowl on Dec. 29 in New Orleans. … Offers included Alabama, Auburn, Florida State, Louisville, Mississippi State, Tennessee, among others. … Consensus Top 40 safety as rated by ESPN, Rivals and 247Sports. … Son of Larry and Yvette Mason. … Larry Mason played running back for the Cleveland Browns in 1987 and the Green Bay Packers in 1988.

The seventh in a series highlighting newcomers to the Arkansas Razorbacks football team.

The 6-2, 205-pound football player from Trussville, Ala., pondered the options as if he was shaking a Magic 8 Ball.

Play running back at Louisville? ... Ask your NFL alumni father.

"The average statistics of the average running back only plays three years," Mason said his father, Larry Mason, told him.

Growing up, Myles and his older brother, Ryan, didn't hear their father talk much about the NFL, but they did stumble upon old pictures and highlight videos. Myles wasn't certain he'd get to run like his father, anyway.

"In the NFL, the way it's going, they don't use running backs like they used to," Mason said.

Convinced that safety was his best option, Mason verbally committed to Mississippi State in October.

Bret Bielema was then fired after a 4-8 season at the University of Arkansas, Fayetteville, which hired Chad Morris on Dec. 6.

Mason received an offer from Morris and visited the Razorbacks' campus Dec. 15 -- five days before the NCAA's early signing period.

While the visit didn't convince Mason to sign early with Morris' first recruiting class, it kept Mason from signing officially with Mississippi State.

"On my official [visit], it felt like everything is positive, great people on the campus," said Mason, who recorded 39 solo tackles and rushed for 277 yards on 30 carries during his senior year at Hewitt-Trussville High School. "Like, I went into it blind. Didn't know too much about campus. I told my parents I needed to go back one more time."

Just over a week later, Morris hired former LSU and Texas A&M defensive coordinator John Chavis, and that all but made Mason's decision certain.

The fact that a Chavis-coached defender had been drafted in 22 consecutive years also aligned with Mason's NFL aspirations.

"[Chavis' hiring] was big for me," said Mason, the nation's No. 29-ranked safety of the Class of 2018 according to 247Sports. "I know how much he has gotten during his experience, the amount of players he put in the league."

"That was really the start of it. That's when I really started paying attention."

Mason returned to Fayetteville on Jan. 19 and made up his mind.

"After a bunch of prayer and talking with my family, I am proud to announce that I will be decommitting from Mississippi State University and recommitting to the University of Arkansas," Mason tweeted the morning of Jan. 22.

Last season, the Razorbacks had their third losing season in the last six years; but Mason believes the staff overhaul will improve a defense that ranked 101st in total defense (438.9 yards allowed per game) and 114th in scoring defense (36.2 points allowed per game) in 2017.

"I see a lot of change that's coming in this program," Mason said. "I think it's very well coming up. I think that the coaches and the people around the campus, they have contributed a lot to it. Everything is going to go uphill from now on."