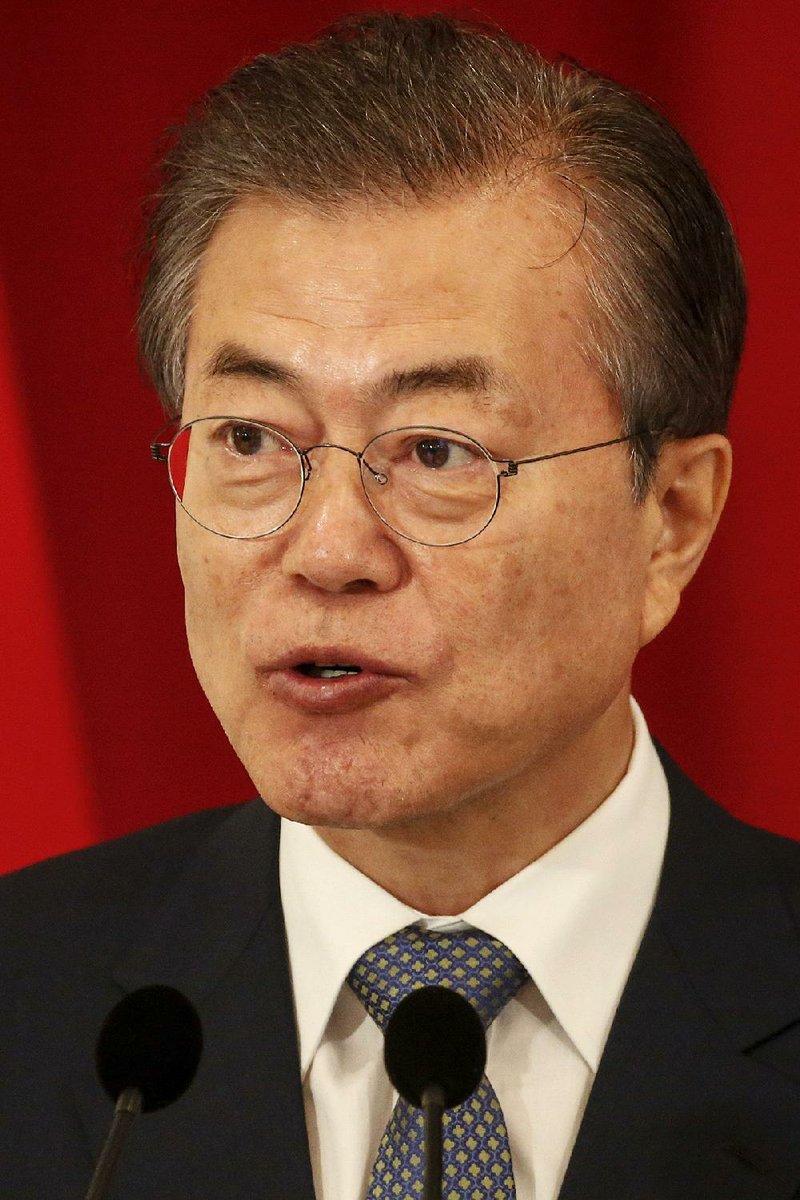 Moon said at a forum in Singapore that Trump and Kim would "face the stern judgment of the international community" if their promises on denuclearization weren't kept.

Singapore was the host of a historic summit between Trump and Kim last month when they agreed to work toward the denuclearization of the Korean Peninsula, without describing when and how it would occur.

Matters between the two countries were further complicated on Thursday, when North Korean officials did not turn up to a meeting at the demilitarized zone at the border where U.S. military figures had been expecting to discuss the repatriation of troop remains from the Korean War. The meeting was rescheduled for Sunday.

Pyongyang for decades has been pushing a concept of "denuclearization" that bears no resemblance to the American definition, vowing to pursue nuclear development unless Washington removes its 28,500 troops from South Korea and the nuclear umbrella defending South Korea and Japan.

Despite Kim's diplomatic onslaught in recent months, doubts linger whether he would ever agree to fully relinquish his nukes, which he may see as a stronger guarantee of survival than whatever security assurance the United States could offer.

Moon, who has met with Kim twice this year and lobbied hard for the summit between Trump and Kim, said he remains optimistic of a deal.

Trump suggested Friday that getting North Korea to disarm will take longer than anyone would like. Speaking at a news conference in Britain alongside Prime Minister Theresa May, Trump said "good things are happening," citing a halt in the North's missile and nuclear tests and the demolishing of a testing site.

But the president added: "It's a process. It's probably a longer process than anybody would like, but I'm used to long processes, too. We haven't taken off the sanctions, the sanctions are biting."

Moon said his view is that Washington and Pyongyang have reached a broad agreement where North Korea completes its nuclear disarmament in exchange for the United States guaranteeing the country's security and ending hostility in mutual relations.

"During the working-level negotiations, there could be debates on whether the chicken or egg should come first, and the countries could also go through a number of difficult phases," Moon said.

"I believe the countries will honor the agreement reached by their leaders even if they face many difficulties during working-level negotiations," Moon said after a special lecture hosted by the Institute of Southeast Asian Studies on Friday.

At his lecture, Moon told the audience that he had himself met with Kim twice and said that the North Korean leader had a "great desire to break away from ideological confrontations and develop North Korea into a normal country."

The day before, he had said that North Korea's negative statement after Pompeo's visit was a "strategy that can often be seen in negotiations" and that Pyongyang and Washington had the same view of denuclearization, according to a statement from spokesman Yoon Young-chan released on Thursday.

Moon, the son of North Korean war refugees, has vowed to build on the legacies of liberal predecessors Kim Dae-jung and Roh Moo-hyun and their so-called Sunshine Policy, which Moon had a hand in building.

Information for this article was contributed by Annabelle Liang and Kim Tong-hyung of The Associated Press; and by Adam Taylor and Min Joo Kim of The Washington Post.