Cicada sounds are the love songs of summer 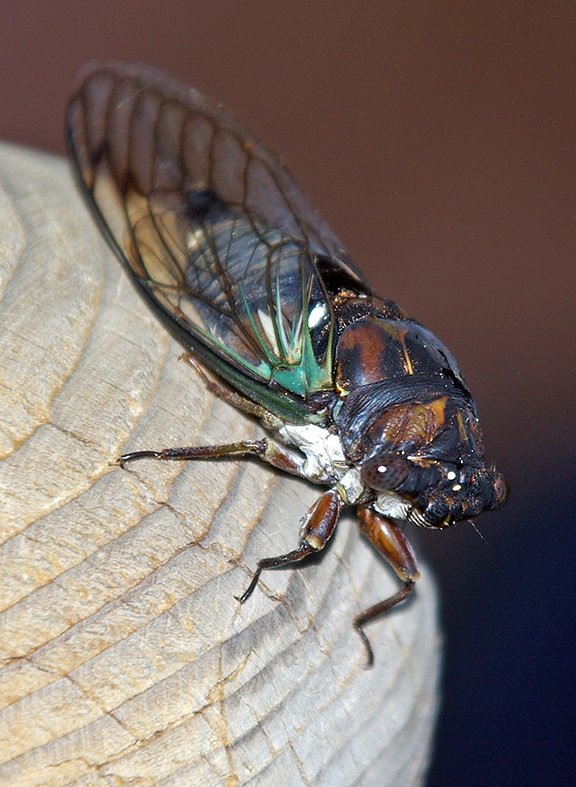 Annual cicadas are seen, and heard, every year, even though several years may pass for the completion of one generation from underground nymphs to winged adults.

Have you ever collected cicada shells? Fifty years ago, my childhood friends and I did.

We would be outdoors playing tag or hide-and-seek, or digging worms for fish bait, and someone would issue the challenge: “Let’s see how many locust shells we can find.” Then off we’d go to search the trunk of every tree for the shed skins of cicadas, or locusts, as we knew them.

It was rare to actually see one of the big bugs shedding its hard outer shell, but the shells themselves, technically called exuviae, were pretty common. If we were lucky, we’d strike it rich and find eight to 10, sometimes more, which were carefully placed in little brown paper bags from my uncle’s grocery store. Whoever found the most won.

When they were growing up, my six sons collected cicada shells, too. Each golden-brown shell resembles some sort of prehistoric animal with gnarled legs and a pair of big pincers up front. The youngest boys feared them at first, especially when an irritating older brother would decorate his head with the ugly insect skins and make faces like he was being attacked. But then one of the boys would explain what he had learned from me or an older brother—how the shells come from harmless baby bugs that live underground feeding on the sap of tree roots. Pointing out the slit up the back of a shell, he would describe how the larval cicadas would dig to the surface and climb onto the trees, latch on with their claws and break free of their skins to emerge as fully grown insects. The slit was the escape hatch for what would become the winged adult.

Occasionally, an adult cicada was caught and became part of the backyard show-and-tell. These huge bugs didn’t bite or sting, so the older boys had no fear of them. But when grasped tightly between a thumb and forefinger, each insect would cut loose with an extremely loud, high-pitched whirring sound that my youngest sons found disturbing. It wouldn’t be long, however, before even the youngest boys were playing with these fascinating insects like they were pets.

I am reminded of these things today because it is the first day this summer I have heard the male cicadas making their familiar mating calls. These insects appear annually during the heat of summer, so they sometimes are called dog-day cicadas. Smaller species called periodical cicadas appear here only once every 13 years, typically in May or June instead of July or August. These emerge in unbelievable numbers and make an astounding noise. An article in the Arkansas Gazette reported them on May 25, 1855, with a note that some people believed them to be an omen of war because “they have red eyes, and the letter W (for war) on their wings.” As you may remember, millions of periodical cicadas from the last brood appeared here in 2015. The next brood won’t make an appearance until 2028.

Male cicadas make sounds to attract nearby females, which respond by snapping their wings. The male hears this and responds by moving closer.

A few years ago, researchers learned that as the male cicada approaches the female, the male’s sound gets softer. One researcher described this as the cicada putting on its best bedroom voice and uttering the insect equivalent of “Hey, baby.”

In field experiments, the researchers showed that they could trick the male cicada by making a snapping sound that mimics the female. When mating is complete, the cicada is done — the male anyway. Females live long enough to lay up to 600 eggs in the branches of trees before they die. When the nymphs hatch, they drop from their canopy nests and burrow underground until they find a fat, tasty root to suck on. And there they remain until it’s time for their brood to emerge and start the cycle all over again.

On some days in July and August, particularly during those years when a brood of periodical cicadas emerges, the droning of male cicadas in the trees can be almost overwhelming. The loudest cicadas can emit a sound exceeding 100 decibels, which can be heard more than a mile and a half away.

But cicadas are typically less than 2 inches long. How is it that such a small animal can make such a loud sound? With no vocal chords, no lungs and no loudspeaker, it ought to be impossible to hear a cicada from a mile and a half away, yet it is not.

To understand more about cicada sounds, we first must know how these noisy summer insects make sounds. This is done not by rubbing together their wings or legs, as some people think, but by using special sound-producing organs called tymbals. Each cicada has two of these ribbed membranes, one on each side of its abdomen.

The complex manner in which each tymbal produces sound can be difficult to understand, but Kyle Schiber, writing for the Chicago Academy of Science blog, explained it quite simply.

“The tymbal contains a series of ribs that buckle one after the other when the cicada flexes its muscles,” he said. “Every time a rib buckles, the rib produces a click. Many clicks produce a buzzing sound. The action is like how a bendy straw makes sound: pulling and pushing the ribs of the bendy straw together makes a series of clicks. If you could push, pull, and twist a bendy straw hundreds of times a second, the sound of the clicks would be so close together that you’d only hear a buzzing sound. This is how fast the cicada is able to vibrate its tymbals.”

While that paragraph describes quite clearly the basic mechanism of the cicada’s sound-producing tymbals, reproducing the sound is still a daunting challenge for researchers. Having the cicada’s ability to make an extremely loud noise with a very small body using very little power could be useful in many ways. For example, scientists at the Naval Undersea Warfare Center in Newport, Rhode Island, believe reproducing the cicada’s sound would be the first step toward making devices that would mimic it for remote sensing underwater, ship-to-ship communications, rescue operations and other applications. But the lead researcher on that project, Derke Hughes, said his team has not yet worked out an accurate physics-based model that replicates the manner through which the cicada makes its sounds.

“We’re still working on it,” he said.

While Hughes and other scientists continue looking at ways humankind can benefit from cicada songs, however, people like me who consider cicada sounds as soothing as a lullaby can enjoy sitting in the shade of a tree on a warm summer day and listening to the rhythmic sound of countless cicadas thrumming overhead. This is, for many of us, a sound that is uniquely Southern and distinctly a part of summer, a sound quite likely to bring back memories of youthful days collecting locust shells with friends.