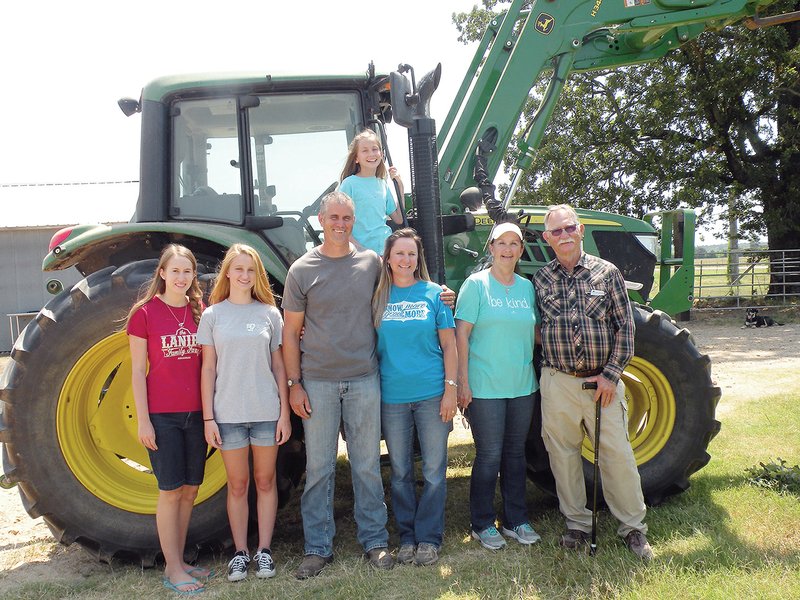 The Michael Lanier family of Rolla is the 2018 Hot Spring County Farm Family of the Year. Family members include, front row, from left, Aileen Ables, Leah Lanier, Michael Lanier, Jenny Lanier, Peggy Whatley and Jerry Whatley; and in back, Abrie Ables. Not shown are the couple’s sons, Travis Lanier and Jacob Lanier.

ROLLA — Michael and Jenny Lanier are continuing the family tradition of farming.

Jenny’s great-grandparents started the family farm 70 years ago. Today, the Laniers are continuing that way of life and have been named the 2018 Hot Spring County Farm Family of the Year.

The Laniers live on the family farm where Jenny grew up.

Jenny is a daughter of Jerry and Peggy Whatley, who also still live on the farm that was started by Jenny’s great-grandfather, the late Clarence “Daddy Tank” Tankersley, in 1938. Tankersley was chosen by the Hot Spring County Conservation District as the Outstanding District Cooperator and its Conservation Farmer for 1973. The farm was then managed by Tankersley’s daughter and son-in-law, Mildred and Joel T. “Bud” Whatley. The third generation to manage the farm was Jenny’s parents.

Michael said his father-in-law, Jerry Whatley, “has been very involved in research and experimenting with farming techniques to improve soil quality, weed control and herd health. Jerry was president of the Hot Spring County Cattlemen’s Association for a few years and has been on the board of the soil conservation district as well.

“Jenny was raised working on the family farm and going to farmers markets selling the vegetables as a child,” Michael said. “Eight years ago, she started selling beef at farmers markets, and we have truck-patched corn and purple hull peas.

“We purchased the cattle from Jerry over two years ago,” Michael said. “Now it’s our turn to continue to improve the farm and make a living. We learn something new nearly every day.

Jenny said the couple have “not inherited the farm yet.”

“We just inherited the farm work,” she said, smiling. “The torch has been passed to us, so to speak.”

Jenny has one brother, T.J. Whatley, who is a civil engineer in Ozark, Missouri.

Jenny graduated from Arkansas State University in 1994 with a Bachelor of Science degree in real estate and insurance.

“I was in the business world for years before farming,” she said, “but farming is by far the best job for me.”

Michael was born in Texas, a son of Billy Ray and Rene Lanier of Hughes Springs, Texas. He has one sister, Misty Lanier of Birmingham, Alabama.

He does not come from a farming background.

“I have a mechanical background,” he said, adding that he wanted to be a welder and is a 1992 graduate of Quapaw Vocational Technical School in Hot Springs, where he received his certification in welding.

“I worked for many years for Otis Elevator, installing elevators in Arkansas and Louisiana. It was a brutal job,” Michael said.

“I also worked as a lumberjack. I like working with my hands,” he said.

“My father-in-law’s knowledge is invaluable on the farm. … He is helping us,” Michael said. “This is a whole lot better life than working on elevators. It’s a free life … a good life.

“I don’t feel deserving of the Farm Family of the Year honor. We are working hard, just maintaining what her family did before us.”

The Laniers have been married eight years. They met at the Country Corner store in Lono, which Jenny and her mother owned for 15 years. Jenny was a widow with two young daughters when she and Michael met.

“I would stop in there as I traveled back and forth from my place in Willow,” Michael said. “I would see her there with her cute little family. I thought Jenny was the sweetest woman on the planet. … I still do.”

The Laniers have been farming for eight years as well. They rent 270 acres and own 65 acres. They have a crossbred Angus cow/calf operation of 97 momma cows and 80 calves. They have sold their beef at the farmers markets in Hot Springs and Arkadelphia, as well as through the Country Corner store in Lono.

They also have meat rabbits and a fruit orchard and raise 97 acres of hay that produce 600 bales annually, most of which they use themselves.

“My wife and I manage four commercial chicken houses for my in-laws,” Michael said, adding that the chickens are owned by the Keith Smith Co. of Hot Springs. “This extra income contributes to our monthly expenses for the cattle operation. We use the chicken litter as our fertilizer on the fields, which greatly helps our soil and grass nutrition for the cattle.”

“We want to be as efficient as we can be,” Michael said. “We practice pasture rotation. During our prime grazing months, we try to rotate the cattle on a 28-day cycle, which will allow the land to rest and rejuvenate.

“We also use all-natural fertilizer with the added chicken litter, … and shade trees have been planted … to reduce heat stress on the cattle during the hottest months.”

Michael said one of the family’s goals is to have grasses year-round with cool-season and warm-season grasses and legumes.

“We want to get the farm to be self-reliant,” Jenny said. “Just the other night, everything we had for dinner we had butchered or grown ourselves. That’s a good feeling.

“Through a friend, we discovered Paul Gautschi and his Back to Eden organic gardening. We highly recommend everyone checking into his way of simple, sustainable solutions to gardening. We no longer have to till and rarely have to weed.”

In mid-June, Jenny said, they had not had any rain in three weeks.

“Yet we have not watered our garden, and our soil is moist and rich in organic matter,” she said. “Our fields, however, really need rain now.

“Our kids are also a big help with planting, shelling, shucking and peeling, too.”

All of the Laniers’ children have been involved in 4-H. The girls continue to enter projects in the Hot Spring County Fair each year.

Jacob is a junior at Ambassador Baptist Academy, which is affiliated with Gospel Light Baptist Church in Malvern. He recently won first place in the school’s fine-arts competition in the woodworking division. He also plays football at school.

Leah is home-schooled and enters multiple art projects and crochet items in the county fair. She recently won first place in an essay contest at Stuttgart.

Aileen is a member of the FFA chapter at Ouachita High School, where she is involved in Beta Club and plays basketball. She competed at the National Beta Club Convention last year in Orlando, Florida.

“All three of our girls are active in helping with local community fall festivals,” Michael said. “They also support the annual 5K run to raise money for the Homeless Coalition.

“Our children have been invaluable help with the farming duties.”

The Laniers are active in the community. They participated in the Hot Spring County Cooperative Extension Service research demonstration in 2017-2018.

Jenny, who is a graduate of Arkansas State University, is president of the Lono Community Center, vice president of the Lono Cemetery Association and a member of the project planning committee for Annie’s Project, a course sponsored by the Hot Spring County Cooperative Extension Service to strengthen women’s roles in agriculture. She originated the elementary peewee cheer program for the Ouachita School District in 2016 and was the junior Beta Club’s group talent teacher at Ouachita Junior High School in 2017.

Jenny is a current member of the Hot Spring County Farm Bureau and Arkansas Women in Agriculture. She also holds a pesticide license from the Arkansas State Plant Board.