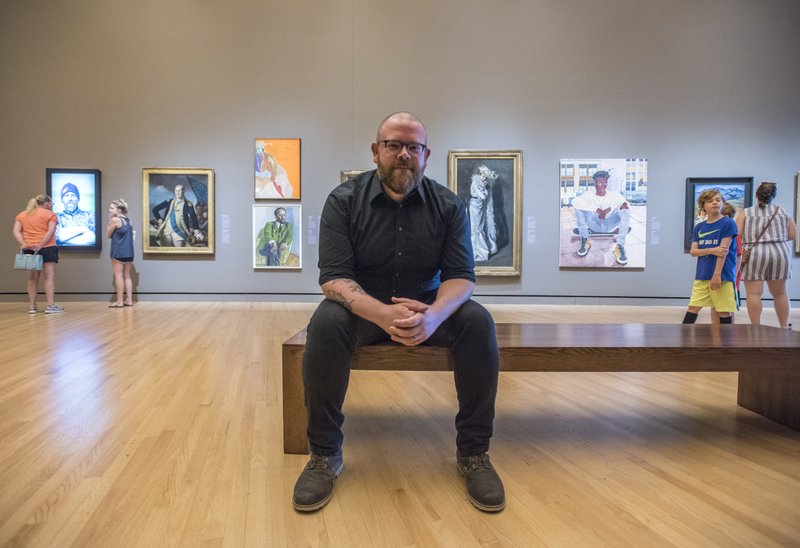 Shane Richey creative director of experimentation and development at Crystal Bridges Museum of American Art sits, Friday July, 13, 2018 in one of the main galleries at the museum. Richey is developing ideas on augmented reality audio programs for the museum where visitors will have the ability to walk up to a pieces of art and listen to an audio about the art using their phones or other devices.

BENTONVILLE -- Don't be surprised if George Washington starts talking to you some day at Crystal Bridges Museum of American Art.

Shane Richey, creative director of experimentation and development at the Bentonville museum, is working on a new "immersive technology" audio program that will help bring Charles Willson Peale's painting of Washington to life, along with other subjects of art in the galleries.

"The experience will be as if the frame of the painting were a window," Richey said. "The person in the painting will be speaking to you. Sounds will be coming from the environment."

That could mean the sounds of Revolutionary War muskets and cannons in the background. In Peale's painting, Washington is leaning on a cannon.

"It's about creating a level of understanding that makes it more meaningful," Richey said.

He's working on a prototype "augmented reality" audio program that will likely use bone-conduction headphones that provide sound through a bone behind the ears. That way, museum-goers can still hear what's going on around them.

The headphones will work in conjunction with a pocketable device that can be picked up in the museum lobby.

The paintings will know when a viewer with the device gets close, and that will cue the audio.

"You walk into this space and the works of art beckon to you audibly," Richey said.

It's just an idea for now, but it caught the attention of the John S. and James L. Knight Foundation, which announced Thursday that Crystal Bridges is one of a dozen recipients of $50,000 awards to help connect people with art through technology.

"The projects will receive $50,000 each to uncover new, potentially-replicable strategies for cultural organizations to adapt to and thrive in the digital era," according to a news release from the foundation.

It's the replicable part that Richey emphasizes. This isn't just a new technology for Crystal Bridges.

"The end result is that this will be a repeatable project for other museums to pick up and expand upon or just use as it is," he said.

Richey said Samantha Sigmon, interpretation manager at Crystal Bridges, is working with him on the project. There's also an internal advisory board of four people.

"This is an entirely new approach to delivering audio in the gallery, and while I have some assumptions on how it's going to work, it's very possible that when we actually start testing it every one of those assumptions will go out the window," Richey said.

The grants give recipients freedom to take risks and do some experimenting, said Chris Barr, director of arts and technology innovation for the Knight Foundation in Miami.

"Museums were shy about technology at first, but they're starting to realize that a good chunk of our visitors really get something out of it," Barr said.

"There are a million things pulling people's attention every day. People live more and more in these digital spaces. How can we help cultural institutions remain relevant in the digital age?"

While there is a definite digital component to the Crystal Bridges proposal, they're looking at doing it in a way that allows the museum visitor to go sort of on auto-pilot, Barr said.

"It's an approach to technology that keeps your phone in your pocket," he said.

That could make a visit to the museum more meaningful for the visually impaired, he said.

Crystal Bridges has a mobile app "that alerts listeners when they are near a featured artwork in the gallery," according to Apple's iTunes store. If visitors don't have an Apple or Android smartphone, they can pick up a device at the museum that already has the app downloaded onto it.

The new program will be a much more immersive experience than the current technology, he said.

The audio will be done in a way that's relaxing rather than distracting, Richey said.

The proposed audio system would allow people to move at their own pace, to linger or go where the art draws them, Barr said.

"There is this sort of wandering element," he said. "Museums are kind of these sanctuaries for some people. It's really this reflective space."

Richey said they'll check with living artists to see what they think about using the technology to enhance the viewing experience of their artwork.

"We always want to respect the artist," Richey said. "If it's something that adds too much or goes too far, that's information we want to have."

Richey said he hopes to test the prototype in February and March. A final report will be provided to the Knight Foundation in April.

Other recipients of the Knight Foundation grants include Wikimedia, the nonprofit that operates Wikipedia; Alley Interactive, a digital consultancy; and the Massachusetts Institute of Technology's Center for Art, Science & Technology.

Knight Foundation launched the open call for ideas in February 2017, through the Knight Prototype Fund, which supports the quick development and testing of early stage, innovative ideas, according to the release.