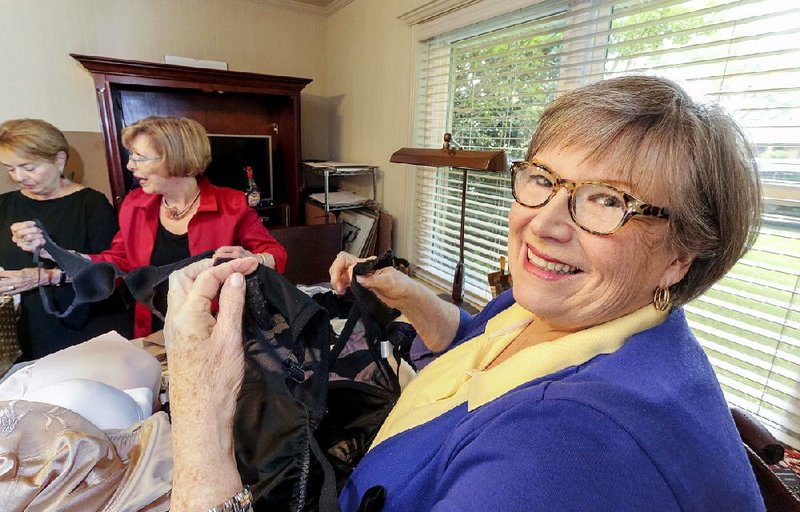 What woman doesn't have a bra in her drawer that doesn't fit?

Donna Norvell Smith had a drawer full and didn't know what do to with them, until she saw a Facebook post from a woman in Maryland who collected bras for homeless women. She had her answer.

In just two years, Smith and her organization -- BRAS (Bras Received And Shared) -- has collected more than 2,700 brassieres, and they are still coming in. She and a group of friends get together every few months to sort, wash and deliver the undergarments to homeless and women's shelters.

"As a woman who has bought many bras that didn't work for lots of reasons, I knew we could collect those and get them to several places serving homeless women and women in transition in Little Rock," Smith says. "What I didn't know was that almost every woman has a few bad bra purchases that needed to be relocated."

On a recent Wednesday, the group got together at Smith's Little Rock home and bagged up 147 donated brassieres. During their work, lots of bra jokes were tossed around by the lively bunch.

"This is the 'foundation' of our group," Smith said of the five women who joined her. They were Carole Canino, Debbra Christenson, Mary Segraves and sisters-in-law Ruthie Hiett and Martha Hiett.

Piles were formed of small, medium and large bras. The largest bra they have seen is a 42-inch triple H cup, Canino says, adding that's the "Dolly Parton size."

"It looked like a swing," Canino says, garnering loud laughs from the friends.

Christenson and her husband, Stephen, own BA Framer at 1813 N. Grant St. in Little Rock. They set up a bin in their store where women can donate new or gently used bras.

"When we first started doing this I called several places to see if they would be interested," Martha Hiett says. "The response was so overwhelming. I just had to mention bras, and they were like, 'Yes! Yes! We need bras. Can we get bras?'"

"I never realized there would be that much of a need or an interest in giving bras. When you deliver them you can see from the women that they are a luxury," Hiett adds.

The group organized in April 2016. Smith stresses that BRAS is not a nonprofit agency.

"We do not collect money. We only want bras and it seems everyone has a few that don't work," she says.

People who want to donate money are asked to buy bras and donate them to the cause.

"We have teenage girls who need them because a lot of times kids come to us with just what they are wearing. They don't have any underwear and having a bra means the world to them," says Kelli Reep, director of communications at Methodist Family Health.

Barbara Polite runs the clothes closet at Stewpot. The closet is open from noon to 1 p.m. Thursdays. Before BRAS, the closet only had a few bras to hand out. Now they have five bins of them sorted by cup size.

"Quite a few women come in for clothes and they always want a bra," Polite says.

Smith gets the word out about BRAS through websites such as Nextdoor and Facebook. But sometimes mistakes happen. One woman saw the request on Nextdoor and took a large bag of brassieres to BA Framer's old location -- which is now the Sushi Cafe. Behind Sushi Cafe is a pink trash dumpster that the woman mistook for the collection bin.

"My husband [David] dove in that dumpster and got them out," Smith says. "They were covered in trash. ... So we have been through the trash."

As word spread on social media, the group has received bras from Nevada, Oklahoma and other locations. On this particular day, many of the bras were from Victoria's Secret and some were a tad risque. Two sets of pasties were donated.

The women make sure every donation bag has an assortment of sizes. Sports bras are set aside for Centers for Youth & Families and Methodist Children's Home because the girls can't have underwires for safety reasons.

"We like to clip them and make sure they work," Smith says of closing hooks and snaps. "If they are shot, we just throw them away."

"If we wouldn't wear them, we are not going to give them to our friends," Smith says.

The pasties went into the trash pile.

Bras in good condition can be dropped off at BA Framer at 1813 N. Grant St. in Little Rock. 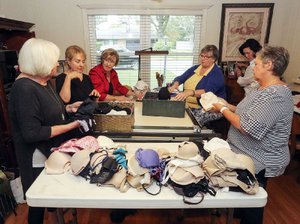