Hogs' WR not listed on roster; player said to not be on team 'right now' 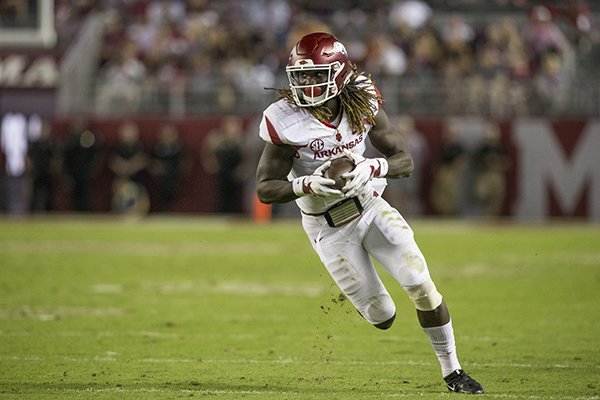 Arkansas receiver Brandon Martin runs after a catch during a game against Alabama on Saturday, Oct. 14, 2017, in Tuscaloosa, Ala.

ATLANTA -- Arkansas Razorbacks receiver Brandon Martin is not on the team roster and is not listed in the team's media guide, which was released digitally Monday at SEC media days.

Martin, who turned 22 on Thursday, is still listed in the student directory at the University of Arkansas, Fayetteville. Sources close to the program said he has run into an academic issue and is trying to regain his eligibility.

A team spokesman said Martin, a senior, is not on the team "right now."

The 6-4, 219-pound transfer from Mississippi Gulf Coast Community College -- rated the No. 1 junior-college prospect in the signing class of 2017 -- struggled with injuries last season and wound up ranked eighth on the team with nine catches for 119 yards. He also missed parts of spring drills.

Texas A&M Coach Jimbo Fisher, the leadoff coach at SEC media days, was asked whether his perspective had changed from last year, when he announced at ACC media days that the league was the premier conference in the country.

Fisher quickly answered 'no,' but his follow-up remarks seemed to indicate a different view of the pecking order of the leagues.

"I'm going to tell you this: I think the ACC's progression to where it has become in football is because of the SEC," Fisher said. "From being in the South, and having to not just play against but to recruit against and compete against daily and the way you have to operate your organization.

"Like I said, when I was at Florida State, we were surrounded by Florida, by Georgia, by Alabama, by Auburn. That was the closest schools to us. That's who our big recruiting battles occurred against.

"We had Clemson and Miami and all those things, and we were surrounded that way. We excelled, Clemson has excelled, Miami has taken off, N.C. State, I mean, Louisville."

Fisher said he thought since the SEC and ACC are geographically intertwined in the Deep South, "it enhanced the ACC's ability to compete and rise its level of ball because of the recruiting competition."

Fisher did better than third-year SEC Commissioner Greg Sankey when it came to addressing the SEC's rival conference.

In his introduction of Fisher to open media days, Sankey pointed out Fisher's career record as the coach with the fourth-highest winning percentage (.738) among all active FBS coaches.

Then Sankey pointed out Fisher had the highest winning percentage among coaches "in another conference," without saying "Atlantic Coast Conference."

LSU and Canada reached a settlement Jan. 5, a few days after a 21-17 loss to Notre Dame in the Citrus Bowl.

"All along I was saying Steve Ensminger could be the guy," Orgeron said. "He runs more of an offense that I'm used to, an offense we've won a national championship with in the past."

SEC Commissioner Greg Sankey pointed out a handful of the 42 football players who will attend media days to highlight some of their achievements and notable bio points. One of them was Arkansas offensive lineman Hjalte Froholdt.

The fourth question asked of Kentucky Coach Mark Stoops was about how critical it is to "get over the hump" in its series against Florida.

The Wildcats have lost 31 consecutive games in the series since a 10-3 victory in 1986. The losing streak includes numerous blowouts, but also heartbreakers such as a 28-27 loss last year in Lexington, Ky., and back-to-back losses in 2014-15 by six points or less.

"Yeah, I always look forward to the annual question here," said Stoops, prompting laughter. "I'll get that 1,000 times between now and that game."

Stoops said he puts no more emphasis on the Gators than any other SEC foe, but "You can't hide from the elephant in the room. It's been a long time."

SEC Commissioner Greg Sankey said the league had looked into holding its media days in Atlanta last summer to coincide with the opening of Mercedes-Benz Stadium, but construction in the area made it unrealistic.

The dialogue with the Atlanta Falcons and city leaders "started a set of thoughts and preparations that led us here today," Sankey said. "And then, believe it or not, there's a lot of work with changing something you've done in the same place for well over a decade to relocating to a different city in a different facility, but when I stood here for a little bit of practice last night, we have a goal post at the end. We're playing literally on a turf. There's just a feel around football that's special and unique."

Sankey said SEC media days would return to Hoover, Ala., next year, but "portability" is in the works.

Nashville, Tenn., and Dallas are both considered strong contenders to host the event in the coming years.

Kentucky Coach Mark Stoops, one of former Arkansas Coach Bret Bielema's closest friends, is confident Bielema will be back in the game on a coaching level.

Bielema, fired in November at Arkansas with a 29-34 record in five years, has performed scouting work for the New England Patriots in the offseason.

SEC commissioner Greg Sankey said the idea of "availability reports" could be on the horizon in college football as a potential outgrowth from the recent Supreme Court decision that has expanded legalized sports betting.

Sankey said the concept of injury reports was discussed at the SEC spring meetings.

"It's clear that the nature of any so-called injury report around college sports will have very different dynamics than are present at the professional level," Sankey said. "FERPA and HIPAA requirements, academic suspensions ... [or] athletics department imposed suspensions and NCAA eligibility issues make something more like an availability report relevant for discussion."

Tagovailoa earned offensive MVP honors in the championship game after playing the second half and leading Alabama to a 26-23 overtime victory against Georgia. Tagovailoa entered the game in the third quarter with the Tide trailing 13-0 and completed 14 of 24 passes for 166 yards and 3 touchdowns with 1 interception to spearhead a comeback.

LSU tight end Thaddeus Moss will miss part of fall camp, but Coach Ed Orgeron is OK with the reason.

Moss will travel to Canton, Ohio, the first week of August to give the introduction speech for his dad, Randy Moss, at the Pro Football Hall of Fame. The induction ceremony will take place Aug. 5.

SEC Commissioner Greg Sankey said football stadiums in the conference will include countdown clocks during TV timeouts that will allow fans to know when play is scheduled to resume.

Kevin Trainor, UA associate athletic director for public relations, is serving as the moderator for SEC media days for the eighth consecutive year.

Texas A&M Coach Jimbo Fisher walked to the podium and said "Howdy," but he was met with no response.

• SEC Commissioner Greg Sankey paid tribute to former commissioner Mike Slive, who passed away May 16 at age 77 from prostate cancer. Slive served as SEC commissioner from 2002 through 2015.

*SEC media days are being held somewhere other than metro Birmingham, Ala., for the first time since 1985.