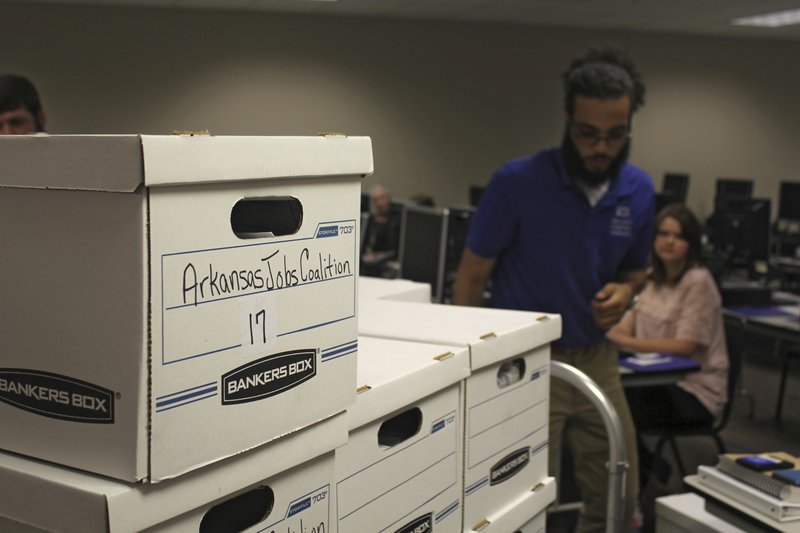 Boxes containing petitions in favor of a proposal to legalize casinos in Arkansas are delivered to the Arkansas secretary of state's office on Friday in Little Rock. Friday was the deadline for ballot measure groups to submit signatures to try and get their proposals on the November ballot. (AP Photo/Andrew Demillo)

The Quapaw and Cherokee tribes collectively contributed $1.2 million in June to the Driving Arkansas Forward committee promoting a proposed constitutional amendment that would authorize the state to license four casinos.

The Quapaw Tribe also made a non-monetary contribution of more than $180,000 last month to the Arkansas Jobs Coalition committee that also backs the proposed ballot measure. The tribe paid that much to a petition canvassing firm.

Monday was the deadline for ballot question committees to file their reports with the Arkansas Ethics Commission for June. Others that filed regarded proposals on minimum wage and term limits.

Earlier this month, the sponsors of the casino proposal estimated they turned in 96,170 signatures of registered voters to the secretary of state's office in their bid to qualify their ballot measure for the Nov. 6 general election ballot. The secretary of state's office is in the process of determining whether the sponsors turned in at least 84,859 valid signatures -- the minimum needed -- or whether they meet the threshold to get 30 more days to collect more signatures.

The proposed amendment would require the state Racing Commission to issue licenses for casinos in: Pope County, within 2 miles of Russellville; Jefferson County, within 2 miles of Pine Bluff; Southland Racing Corp., at or adjacent to Southland Gaming and Racing in West Memphis; and Oaklawn Jockey Club Inc., at or adjacent to Oaklawn Racing and Gaming in Hot Springs. State law now permits Oaklawn and Southland to offer so-called electronic games of skill, so the ballot proposal would allow them to expand their gambling operations.

The committees promoting this proposed constitutional amendment are called Driving Arkansas Forward and the Arkansas Jobs Coalition. Both committees are chaired by lobbyist Don Tilton, who represents the Quapaw Tribe that is interested in developing a casino in Pine Bluff.

In its report filed Monday with the Ethics Commission, the Driving Arkansas Forward committee reported receiving $1.25 million in contributions and spending $725,711.28 last month, leaving $537,088.72 in its campaign account as of June 30.

The largest contributors to the committee are the Downstream Development Authority of the Quapaw Tribe of Quapaw, Okla., that provided $707,000 and Cherokee Nation Businesses LLC of Catoosa, Okla., that chipped in $525,300, the committee reported. Other reported contributions last month included $10,000 apiece from the Gulfside Casino Partnership of Gulfport, Miss., and the Association of Gaming Equipment Manufacturers and $500 from Tilton.

In addition, the committee reported the Downstream Development Authority of the Quapaw Tribe made a non-monetary contribution of $15,800 in legal services from the Steel Wright & Gray law firm.

The committee's largest expenditures last month were $375,728 to Targeted Platform Media LLC for television ads and about $285,000 to the Arkansas Jobs Coalition for petition canvassing.

That included non-monetary contributions totaling $285,000 from the Driving Arkansas Forward committee and about $182,000 from the Downstream Development Authority that paid National Ballot Access for petition canvassing.

"We are pleased by the financial support we've received from organizations willing to invest in better roads, lower taxes, new jobs and a stronger Arkansas economy," said Nate Steel, counsel for the committees.

Steel has said it's projected the proposal would raise about $120 million a year in net casino gambling tax revenue.

Fifty-five percent of the tax receipts would go to state general revenue fund and 17.5 percent to the Racing Commission for purses for live horse and greyhound racing and the rest to city and county governments where the casinos are located.

Meanwhile, the Arkansas Thoroughbred Racing and Breeding Alliance committee reported raising $10,000 in contributions from Oaklawn Jockey Club Inc. of Hot Springs and spending $2,170 for legal services with the law firm of Friday, Eldredge & Clark LLP of Little Rock in June.

In total, the alliance's committee reported receiving a total of $20,000 from Oaklawn Jockey Club and spending $11,089.14 mostly on legal services with Friday, Eldredge & Clark.

Eric Jackson, senior vice president for Oaklawn, is the chairman and treasurer for the committee, which "intends to monitor and comment on proposed constitutional amendments and other measures that may affect thoroughbred racing and/or breeding activities in Arkansas -- November 6, 2018," according to its statement of organization filed with the Ethics Commission.

Jackson could not be reached for comment by telephone on Monday.

Neither Oaklawn nor Southland have taken a position on the casino proposal.

The committee's expenditures included $96,565 with National Ballot Access of Lawrenceville, Ga., for canvassing, according to its report.

Meanwhile, a ballot question committee to advocate for the disqualification and defeat of the proposed initiated act registered with the Ethics Commission.

It's called Arkansans for a Strong Economy and chaired by Randy Zook, president of the Arkansas State Chamber of Commerce/Associated Industries of Arkansas. Its officers also include officials of the Arkansas Hospitality Association and Oil Marketers Association.

Earlier this month, proponents of this proposed initiated act said they turned in 69,413 signatures of registered voters in their bid to qualify the proposal for the Nov. 6 ballot. They need 67,887 valid signatures to appear on the ballot.

In total, the committee has received contributions totaling $421,125.60 from U.S. Term Limits' general fund and spent the same amount with Arno Petition Consultants, according to its reports.

U.S. Term Limits advocates for term limits at all levels of government and has assisted in enacting and defending term limits on state legislatures in 15 states, according to its website.

U.S. Term Limits' board of directors includes Tim Jacob of Little Rock, who is a spokesman for the Arkansas' Term Limits ballot question committee.

The Arkansas Term Limits committee estimated that it turned in more than 135,000 signatures of registered voters for its proposed constitutional amendment to the secretary of state's office earlier this month. The secretary of state's office will have to verify that at least 84,859 of those signatures are valid for the measure to qualify for the ballot.

Amendment 94, approved by voters in 2014, allows lawmakers to serve up to 16 years in the House, Senate or through service in both chambers. That limit doesn't count the two-year terms drawn by some senators, after the once-a-decade redistricting of legislative seats.

Before Amendment 94, state lawmakers were limited to serving six years in the House and eight years in the Senate. Some senators were able to serve more if they were elected to two four-year terms plus a redistricting-related two-year term.