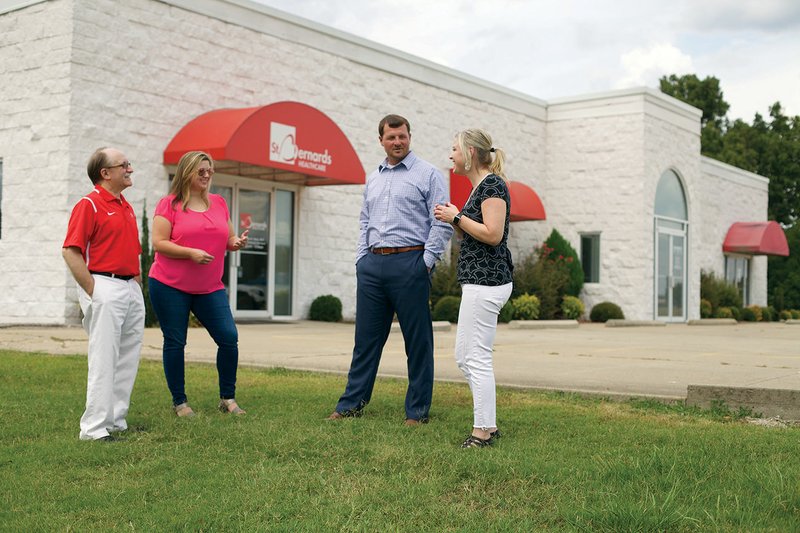 Highland School District Superintendent Don Sharp, from left; Kasey Carter, director of public relations for the district; John Sinclair, director of human resources and transportation coordinator; and Kelly Goodson, coordinator of federal programs/curriculum specialist, talk in front of the medical clinic the school district is buying to create a school-based health clinic. Carter and Goodson wrote the application for the state Department of Education grant for the district, which it received — $540,000 spread over five years — to operate the clinic. The school is partnering with St. Bernards Healthcare ( ROXANNE DAILY )

The Highland School Board voted 6-0 Tuesday night to spend $800,000 to buy a medical building adjacent to the high school to create a school-based health clinic.

Superintendent Don Sharp said the district received a $540,000 grant, spread over five years, from the Arkansas Department of Education to operate the clinic. Highland will partner with St. Bernards Healthcare in Jonesboro, as well as the current school-based mental-health provider, Hope Behavioral of Cherokee Village.

The medical building is owned by Lynn Garner, father of school board member Dr. Julea Garner of Ash Flat, a family-practice physician. She had a practice in the building for 18 years but has taken a job as residency program director for the newly forming Baptist Health-University of Arkansas for Medical Sciences family-medicine residency program at the hospital’s North Little Rock campus.

Garner said she has recused herself from all voting and discussions about the building.

Sharp said that because of Garner’s family connection to the building, which sits about 75 yards from the high school, the district asked permission from the state to buy the building and received a letter of approval from state Education Commissioner Johnny Key.

Garner said her push to get a school-based health clinic started seven or eight years ago. As a seventh-generation Ash Flat resident, Garner said, she knows the needs in the high-poverty area. She said her great-grandfather was one of the first physicians in Sharp County.

“I did not get on the school board to do the school clinic,” she said. Garner said she approached Sharp with the idea, and he supported the project. The superintendent said

73 percent of the 1,650 students in kindergarten through the 12th grade qualify for free or reduced-price meals.

Garner said that in some ways, the health clinic is a pilot project because most school-based clinics don’t offer extensive preventive services. In addition to sick visits, the Highland clinic will offer wellness visits, yearly physicals, including those for extracurricular activities, and immunizations.

“The bottom line is, get the kids healthy; get their immunizations. If they’re healthier, they’ll learn better, and if they learn better, they’ll do better in life,” Garner said. “This is a win-win for everybody.

“If parents want to participate … they don’t have to take off work to take their kid to the doctor, or take off in the middle of the day or get home and find out their kid is sick. It gains a lot of work hours for the community, and it gains health for the kids.”

Parents have a choice of whether their children use the clinic, Garner and Sharp said.

Sharp said school employees can use the clinic, too.

“If a staff member gets up and their throat is sore, maybe they can’t get in to see their doc till 11 o’clock, or 1 o’clock. This way, they can drive in at 8 a.m. and be seen and run to the pharmacy and get a prescription and not lose a day.”

Sharp said he met months ago with health care professionals in the community, and they were in favor of the clinic.

At Highland’s school-based clinic, St. Bernards will provide and pay for the medical staff, such as a nurse practitioner and registered nurses, Sharp said.

The school district will pay the salary of a coordinator for the facility. Sharp said Ben Cravens, the district’s social worker for the past few years, has been assigned to the position.

His salary will be $42,525 on a 190-day contract as school-district social worker/school-based health-clinic coordinator.

“He will double as a social worker and SBHC (school-based health-clinic) coordinator until we determine if that will work or if it’s too much for one person, at which point we will do something different,” Sharp said.

“We’ll have our school-based clinic, and St. Bernards is planning to operate a public clinic,” he said.

The waiting rooms will be separated, Sharp said.

St. Bernards has a cardiology clinic operating in part of the medical building now, Sharp said.

The superintendent said St. Bernards has been a positive force in pulling the project together.

After Garner took another position and moved out of the medical clinic, Sharp said, that became the preferred location. The building will need almost no renovations, Sharp said, adding that the parking lot will need improvements. The alternative-learning-environment program will be housed in the other building that had been under consideration.

The school-based health clinic should be ready by fall, if not sooner.

“I’m saying it’s a possibility it may be ready the beginning of October, but if we can get it going before then, we certainly hope to,” Sharp said. “We’re going to shoot for after Labor Day, but realistically, it may be the first of October.

“We’re excited. It may start slow, and it may start like gangbusters. We don’t know because it’s not something we have any experience with. It offers an option for our community, and we’re a long way from any hospital — the nearest one is at Batesville, and it’s 40 minutes away.”

The Highland School District has a school nurse on each campus, and the nurses have been part of the planning for the clinic, Sharp said.

“If a student gets sick at school, hurt on the playground, [the nurses will] be the first stop, triage or whatever you want to call it. If they determine that student needs more medical care than a school nurse can provide, the nurse will attempt to contact a parent first. … They may want to pick up their child and take them to the health care provider of their choice, but a lot of times, they’re at work and can’t leave,” he said.

“We’ll have staff members designated to transport students and remain with them till parents show up or until the students have seen the medical personnel,” Sharp said.

“What I hear from my nurses is they will send students home maybe on a Wednesday, and they’re running a fever or something … with instructions that they advise they see a physician, and the kid is out the rest of the week,” he said. “The student comes back Monday and has not seen a physician, not seen a doctor. We’re hoping this will help with situations like that.”

Sharp also said cellphone service is “spotty, and we may determine they need care now and can’t contact the parent or guardian. In a case like that, we’d probably transport the student over to the school-based health clinic and send someone to the home to make contact, a resource officer or someone.”

In the beginning of the year, paperwork will be sent to parents. If we have people who already have a primary-care physician, Sharp said, “we will ask that if they would like their child to be able to have access to our clinic, they’d need to select St. Bernards as their primary-care physician or get their PCP to say, in an emergency situation, St. Bernards could see that child.”

Garner said the second piece of the school-based health clinic would be to add a dental hygienist at some point, and the third piece would be to provide eye exams for students.

“It just makes good sense,” Garner said. “The school health clinic is about the kids, getting them well and helping them.”