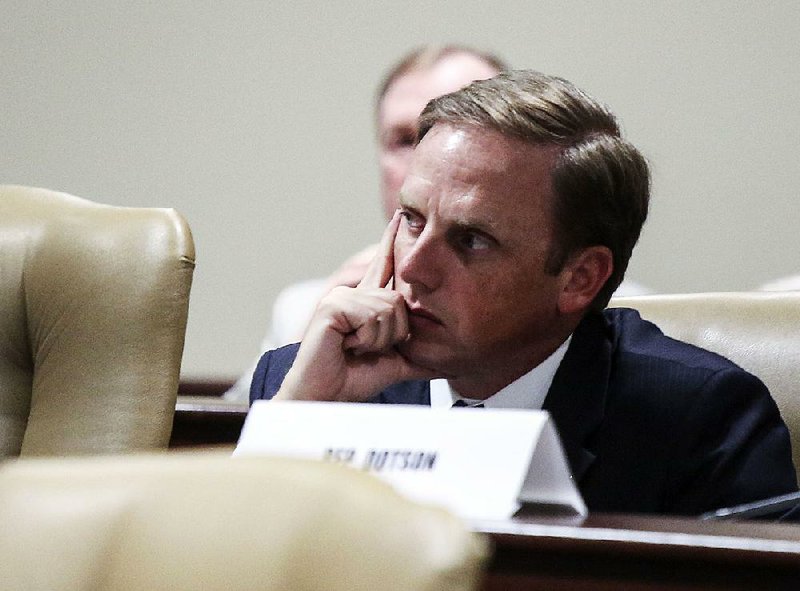 Rep. Matthew Shepherd, R-El Dorado, listens to speakers last week during a legislative meeting at the Multi-Agency Complex of the Capitol in Little Rock.

EL DORADO -- While a cub attorney at his first law firm in El Dorado, Matthew Shepherd was presented a thankless case.

His boss, the erstwhile gubernatorial candidate Bob Compton, had left Shepherd solely in charge of defending a client at trial in a car accident lawsuit in which the plaintiff had fired his attorneys. Even as a young lawyer with no previous trial experience, Shepherd was expected to easily best an opponent who had no legal help. If he lost, it would have been especially humiliating.

"'That's not really fair, it's a lose-lose situation,'" Shepherd recently recalled a colleague telling his boss. "And Mr. Compton turned to him and said, 'Why do you think I'm sending him over there?'"

Shepherd won the case. Nearly two decades later, Shepherd's colleagues in the Arkansas House selected him as their speaker with another unenviable task: steer the chamber past a federal corruption probe that has rocked the Statehouse and led to convictions of four former legislators.

If he succeeds, Shepherd may not receive much credit in the public's eye for fixing a problem that arose from lawmakers' own bad actions.

If he fails, the House and its 100 members will continue to be mired in ethics controversy.

"It never shook my desire to want to lead the House," Shepherd said in a recent interview at his El Dorado offices, now a private practice law firm that he runs with his brother.

"If the public doesn't have trust in the institutions of government, then all the other issues can fall by the wayside," Shepherd said. "If the people don't believe you're working in the right direction, then ultimately how successful can you be?"

Shepherd, 42, took over leadership of the House on June 15, after an early exit by former Speaker Jeremy Gillam, who went to work at the University of Central Arkansas.

In his first month, the new speaker has offered few specifics on addressing ethical issues -- even as the Senate has adopted rule changes and established a committee on ethics. Instead, Shepherd says he'll listen to members and develop a plan before the 2019 regular legislative session starts in January.

Shepherd is also likely to have to respond to discontent over rules passed in 2017 giving the speaker total power over committee assignments.

Already, Shepherd's had to respond to a new situation popping up: state Rep. Mickey Gates, R-Hot Springs, was charged last month, accused of failing to pay years' worth of state income taxes.

Fellow Republicans, including Gov. Asa Hutchinson and Attorney General Leslie Rutledge, have called on Gates to resign, while Democrats want him expelled from the chamber. Shepherd swiftly stripped Gates of his committee leadership positions, but has otherwise said Gates should be allowed to stay pending the outcome of his case.

As the chairman of the House Judiciary Committee, Shepherd was not known for brash or even bold speeches -- in his words, it's "fair to say I'm low-key" -- and was able to put together a coalition of support after an unsuccessful bid for the speaker's chair in 2014.

"He's known as being reserved, but he's also someone who holds deep convictions about issues and people and doing right by people," said state Sen. David Sanders, R-Little Rock, a classmate of Shepherd's at Ouachita Baptist University. "He has a deep sense of fairness."

The son of a homemaker-turned-U.S.-history-teacher and an attorney, Shepherd grew up in a household where newspapers were read daily and the family watched TV stations to stayed tuned in to the happenings in Little Rock and Washington, D.C. The speaker still lives in El Dorado with his wife, Alie, and three children.

His maternal grandfather, Travis Beeson, ran unsuccessfully for lieutenant governor in the 1960s, and the Shepherd family was among the few Republicans among El Dorado's yellow-dog Democrats.

Despite the family's party affiliation, Shepherd's father, Bobby Shepherd, was elected to a judgeship on the local circuit-chancery court. While the younger Shepherd was in high school, his father was appointed as a U.S. magistrate judge in the Western District of Arkansas, a post he held for more than a decade.

"The last thing you want to do is get in trouble in a small town, and you really don't want to get in trouble when your dad's a part of the judiciary and the legal system," Matthew Shepherd said, adding that he was a "pretty straight arrow."

In 2006, Bobby Shepherd was appointed to a spot on the 8th U.S. Circuit Court of Appeals by President George W. Bush.

Despite the authority of his father, Shepherd said he did not give much thought to entering politics -- or the law -- during his adolescence.

Shepherd describes his first election to office in 2010 as a matter of circumstance. At the time, he was a local GOP leader who viewed the House District 6 seat as a likely pick-up, but was unable to find many Republicans to run. So, encouraged by others, he ran himself.

Asked if he would consider running for higher office, Shepherd demurred, saying, "I wouldn't rule it out, but I don't have any firm plans at this point."

His father, in a recent phone interview, said he didn't view his own judicial career as political, and that his son's interest in public service was "cultivated" by Matthew Shepherd's mother's interest in history and family road trips that included stops at presidential homes and birthplaces.

In college, Shepherd received a stipend that he used to take a summer touring Civil War battlefields along with his grandmother, studying the actions of generals.

"It was just the two of them, and they took off -- Virginia, Tennessee, Gettysburg," the elder Shepherd recalled. "I think that he took away from it a scope of appreciation for the magnitude of the Civil War."

At Ouachita Baptist University, Shepherd got his first taste of politics, interning in then-Lt. Gov. Mike Huckabee's office. He also decided to attend law school, and political science professor Hal Bass recalled him as a student with a straightforward, legal approach to his work.

"He was an effective writer, you know, nouns and verbs," Bass said. "I don't remember a whole lot of adjectives coming from Matthew."

After law school at the University of Arkansas, Fayetteville, Shepherd returned home to work at the Compton, Prewett, Thomas & Hickey law firm in El Dorado, where he was placed under the tutelage of prominent figures in the community: Bob Compton and Bill Prewett, both Democrats whom Shepherd described as "legendary figures" and "mentors."

During a June speech to the Political Animals Club in Little Rock, Shepherd recounted the story of his "challenging" first trial and having his early legal pleadings edited by Compton and Prewett, with each imprinting his own stylization on the young attorney.

"In terms of so much of who I am as an attorney, but also as a speaker and a legislator, about how to evaluate issues and think about problems, came from my professional background practicing law in El Dorado," Shepherd said.

While discussing his political ambitions, Shepherd veered to talking about his approach to solving political issues, which he said was focused on finding solutions, not long-term plans. But after losing his first speaker's race, Shepherd said he was approached by colleagues two years ago asking him to run again. Though he was eventually convinced, Shepherd said he initially gave a hesitant response.

"I just want to be on the winning side," Shepherd said.