Arkansas schools look at how to use Aspire scores 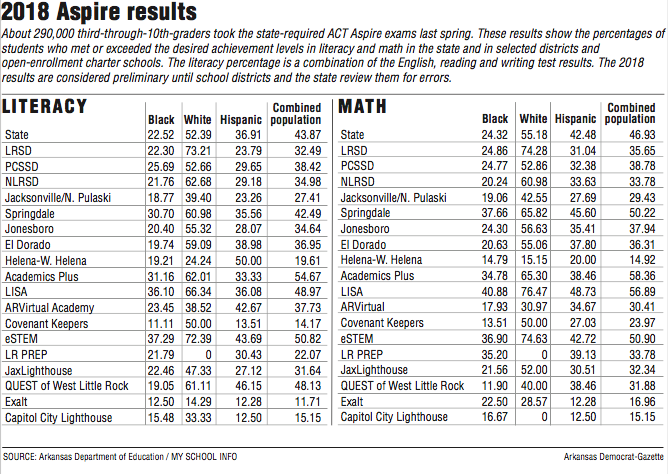 Arkansas educators will be using results from this year's ACT Aspire exams -- given in April to about 290,000 third- through 10th-graders -- in ways different than in the past.

The results from this third year of administering the Aspire exams to Arkansas students come at a time when leaders in the state's public school systems -- including the state's largest, the Little Rock School District, and other districts and charter systems in Pulaski County -- are transitioning to new federal and state requirements for holding schools and districts responsible for student learning.

The federal Every Student Succeeds Act of 2015 has replaced the No Child Left Behind Act of 2002. And Arkansas' Act 930 of 2017 created the Arkansas Educational Support and Accountability System that replaces the older Arkansas Comprehensive Testing, Assessment and Accountability Program, widely known as ACTAAP.

Already the state has established systems for the numerical scoring and applying of letter grades to schools. Those systems are based on yearly Aspire achievement results and Aspire achievement growth over time -- as well as English-language learner progress, high school graduation rates, student attendance, science achievement, Advanced Placement course credit, and community service learning projects. The numerical scoring system is part of Arkansas' plan for complying with the federal law.

Now, leaders in traditional and charter schools across the state are formulating improvement goals to be posted on school and district websites by Aug. 1. And they are looking ahead to writing "student success plans" for every eighth-grader -- plans that will guide those students through their high school years. All of that work is partially informed by the Aspire results.

Arkansas Education Commissioner Johnny Key and the state Board of Education are planning a work session in the next few weeks on the latest Aspire results and the ripple effect they will have on schools and districts.

"There are some changes that we need to go over to equip you to answer questions," Key recently told the Education Board.

Topics to be covered at the session, which board members have asked to broadcast online for public viewing, will include ACT Inc.'s decision to increase the 2018 "cut score" in English/language arts.

That cut score is the minimum score in which a student is considered to be "ready," or has mastered the content and skills for a subject in a particular grade.

ACT Inc. is the maker of the Aspire exams as well as a long-standing college entrance exam. The English/language arts cut score was increased to better reflect the level of achievement needed at each grade to be prepared for success on the ACT college entrance exam and, ultimately, in college.

The English/language arts scores for students and schools are the combination of results from the English, reading and writing portions of the exams. The cut scores didn't change for the individual English and reading exams but only for the combination. There were no separate results calculated for writing this year.

Arkansas uses the English/language arts and math exam results as a component in its state and federal school accountability calculations -- known as the school's numerical ESSA score.

Gary Ritter and Sarah McKenzie of the Office for Education Policy at the University of Arkansas, Fayetteville predicted last week that the higher pass rates for English/language arts will lower the 2017-18 numerical or ESSA scores for most schools. That in turn could affect a school's letter grade.

Ritter, founder of the Office for Education Policy, said he wasn't alarmed by the cut score changes. It's more important that a student's year-to-year Aspire scores -- including the English/language arts result -- accurately reflect a student's preparedness for the ACT exam.

"That influences kids' future outcomes," Ritter said. "I'm less concerned about what it does to the ESSA score."

The department has proposed revisions in the state’s system of applying A-to-F letter grades to schools to account for an increase in this year’s minimum cut scores.*

McKenzie, executive director of the policy office, said she questioned the message sent to the public.

"The letter grades send signals to parents about whether schools are good or not good," she said. "That's what they were meant to do. And now even a school in which English and reading scores didn't change at all is going to be labeled as a worse school because of the cut-score change."

ESSA scores for middle schools in particular will likely drop because of double-digit drops in the percentages of fifth- through seventh-graders meeting the revised English/language arts cut scores. Sixty-two percent of sixth-graders met the ready level in English/language arts in the 2016-17 school year, for example. That dropped 15 points to 47 percent meeting the ready level on the test in April, according to the Office for Education Policy data.

"It doesn't seem like we are giving parents a reliable measure of school performance," McKenzie said.

McKenzie and Ritter noted that the achievement results are just one component of the ESSA score. The change in the minimum passing score doesn't affect other components of the ESSA calculation -- including the measure of student academic growth over time.

Asked why overall student results remained flat in 2017-18 as compared with 2016-17, Ritter said there aren't a lot of "familiarity gains" associated with the Aspire.

Arkansas, which is now alone in the nation in using the Aspire on a statewide basis, has administered the test for three years. In 2018, 47 percent of students scored at ready or better levels in math, 40 percent in science, 70 percent in English and 41 percent in reading -- all the same overall results as in 2017, according to the Education Policy office.

"They aren't jumping just by knowing more about the exam," Ritter said about student achievement. "Kids this year didn't learn any more or any less than they did the year before."

McKenzie said there were increases in percentages of high school students scoring proficient or "ready" in math achievement, but that was offset by decreases in middle school.

The Office for Education Policy analysis is available at https://bit.ly/2mvpmaB.

Little Rock Superintendent Mike Poore and his staff recently reported to that district's Community Advisory Board on the district's Aspire results. The advisory board serves as a liaison between the state-controlled district and its residents, in the aftermath of a 2015 state takeover of the district because of chronically low achievement at six campuses.

Poore said a first look at the Aspire results "can take the wind out" of him and others who hoped for better scores. But he also said the results can be viewed in multiple ways, some of which reveal academic growth.

"You will see positives but also areas where we need to improve," he said, adding that what is most important is that students make a year's worth of academic growth in a school year.

Danyell Cummings, the district's director of testing and evaluation, pointed out cases where the percentages of students scoring at the lowest "need support" level on the tests had decreased since the 2017 test. As a result, the percentages at least grew in the "close" category if not in the desired "ready" or "exceeding ready" levels.

"This is deeper data than we have ever had," Poore said. "The positive is that it allows us to look at our schools to get a better grasp at how we are performing at a grade level or in a content area and look at it in terms of teachers and over time. It allows us to look at reading and we can say we had gains and we were 'this close' to kids making a year's worth of growth. What is it that we missed? A key standard? Maybe there were a lot of missed standards, or maybe just one."

"How do we get more of those?" Jeff Wood, chairman of the Little Rock Community Advisory Board, asked about the high performing schools. "That's what the community wants to see -- those amazing numbers."

The results for the Little Rock district and all other districts and schools are on the state's My School Info website: https://myschoolinfo.arkansas.gov.

Sheketa McKisick, the district's federal Title I program director, described efforts by the Little Rock schools to develop their school improvement plans as called for by Act 930 of 2017 on school accountability.

"Different teams will go about it differently. Don't expect to see the very same goal in every building," McKisick said. "But you will see a focus on instruction and a focus on student achievement because that is what we do. And the plans should have a way of showing us that we have met our target or we have not.

"That target is moving us to the goal," McKisick said, adding that the goals for a school must be specific, measurable, reasonable and timely.

McKisick said current efforts by schools differ from past improvement efforts when the state labeled low-performing schools and required them to meet certain mandates.

"That's not the case anymore," McKisick said. "Those 13 may not have been what you needed in your building but you were told that you had to examine them and initiate them in your plan. We are now in essence driving the bus.

"ESSA puts it back in our hands," she said, and she expressed confidence in the district personnel, including principals.

Wood said the well-being of thousands of students is at stake.

"This is all about their future being bright and Little Rock being a successful city because we have a really good product coming out of Little Rock high schools," Wood said. "We have got to push these numbers. For each individual kid, their lives have to be better 10 and 15 years from now."

*CORRECTION: The Arkansas Department of Education has proposed revisions in the state’s system of applying A-to-F letter grades to schools to account for an increase in this year’s minimum cut scores, or “ready” scores, for English/language arts on the state-required Aspire exams. A previous version of this article noted a potential for lower school letter grades because of the new cuts scores but failed to include the state’s plan to compensate for the higher cut scores by lowering the A-to-F grading scales for elementary, middle and high schools. ACT Inc., the producer of the Aspire, raised the minimum “ready” cut scores for English/language arts.

Print Headline: Schools look at how to use Aspire scores