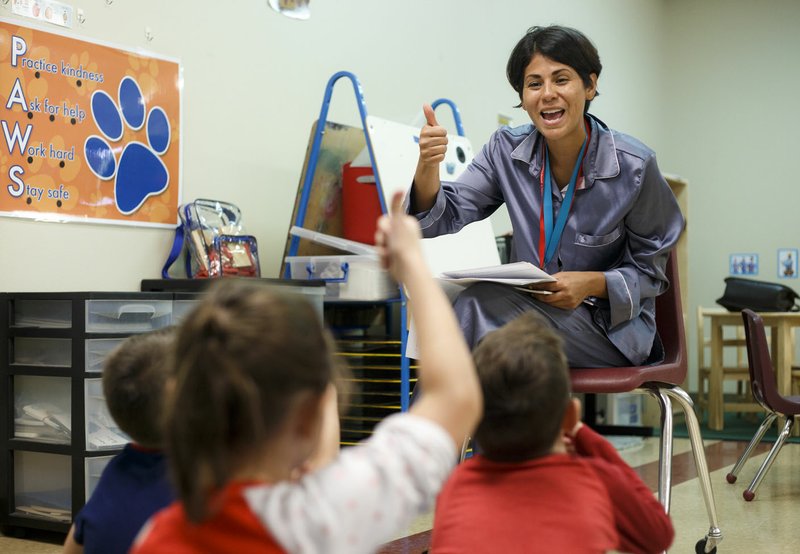 Teacher Emilia Ortiz leads a lesson on rhyming Thursday at Tennie Russell Primary School in Bentonville. The Bentonville School District is in the fourth week of a six-week pilot program serving students who will be entering kindergarten in the fall. These kids either have been identified with behavioral concerns or have no preschool experience.

BENTONVILLE -- Bentonville Schools officials hope a six-week summer program will give incoming kindergartners the life skills they need to succeed in school.

"I think it's been a success since day one," said Russell Principal Lori Passmore.

Program goals include improving students' social and emotional development and gaining a full understanding of each students' strengths and weaknesses, which will better inform the schools when it comes to lesson planning and placement in kindergarten.

"We'll not only have behavioral data, but we'll have academic data. We'll know where these children are and where they're coming in," Passmore said.

Children also learn functional communication, such as knowing when to ask for help or saying "excuse me" when needing someone's attention. Tolerance and friendship also are part of the curriculum.

Cierra Wooten of Centerton enrolled her 5-year-old son in the program after receiving a letter in the mail about it. It's the boy's first exposure to a school environment. Her son listens to and follows directions better since joining the program, Wooten said.

Passmore estimated about one-third of the program's students have not spent any time in preschool.

The idea for the program developed from a realization it's the youngest students -- kindergartners and first-graders -- who struggle the most with behavior, said Tamara Gibson, director of elementary education.

"It's really hard to teach academics if you don't have the behavior under control," said Paula Webber, the district's director of special education.

Passmore and Webber wrote the proposal for the program. The School Board approved it by a 5-1 vote in April. The cost at the time was estimated at $44,140. There is no cost to participating families.

Money spent on the summer program may offset at least some of the special services these students otherwise would need during the school year, Passmore said.

The students are served breakfast and lunch each day at the school's cafeteria. Passmore sees this as a big part of the program, because the cafeteria is where students often experience emotional outbursts, she said.

"So eating in the cafeteria twice a day has been a really good learning experience for everybody. We're learning more about the kids just by the cafeteria," she said.

Last Monday, a group of eight students and five staff members danced along to a music video about the water cycle. Then a teacher asked them to sit on the rug; those who did so and were quiet received a sticker. They then broke up into different activities on a rotating basis.

One student got upset over not being able to do a particular activity when he wanted. His frustration led him to slap a staff member twice on her arm while she attempted to explain the rotation system to him. A few minutes later, two staff members engaged the boy in a conversation on the rug, where he seemed to calm down.

The program began with students meeting in several small groups. The groups were merged into two classrooms in week three as program directors strive to more closely model what the students will experience when they enter kindergarten, where the student-to-teacher ratio is 20 to 1.

District officials will track the program's students as they go through kindergarten. Their teachers will get questionnaires to complete about the students' behavior, and tests will show their academic progress.