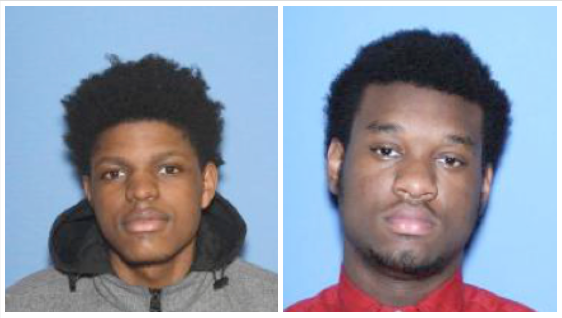 From left: Devin Smith, 21, of North Little Rock and Jason Bridges, 17, of Maumelle.

A man was shot Tuesday afternoon during "an apparent drug deal" near a central Arkansas fast-food restaurant, authorities said.

Officers were sent at 4:45 p.m. to the Zaxby's at 209 Marshall Road in Jacksonville, according to an arrest report.

The victim, listed as Cody Beaty of Conway, told officers he and another person picked up 21-year-old Devin Smith and 17-year-old Jason Bridges in the 200 block of Marshall.

The pair asked the vehicle's occupants if they smoked weed, the report states, but when Beaty asked about the price, Bridges put a gun to his head. Smith and Bridges then tried to rob the people inside the vehicle of their money, according to a news release from the city's Police Department.

Beaty told authorities the would-be robbers eventually got out, and Bridges fired multiple rounds into the vehicle. One bullet hit Beaty in the buttocks, police said. His injury was described as non-life-threatening.

A witness saw the two run into the woods between Zaxby's and North Metro Medical Center, where authorities later found them, police noted.

Smith, a North Little Rock resident, remained at the Pulaski County jail Wednesday afternoon with no bond set, records show. He is scheduled to appear in court Aug. 16.

Bridges is expected to be tried as an adult, Jacksonville police spokeswoman April Kiser said. The Maumelle teen did not appear on the jail's online inmate roster Wednesday.