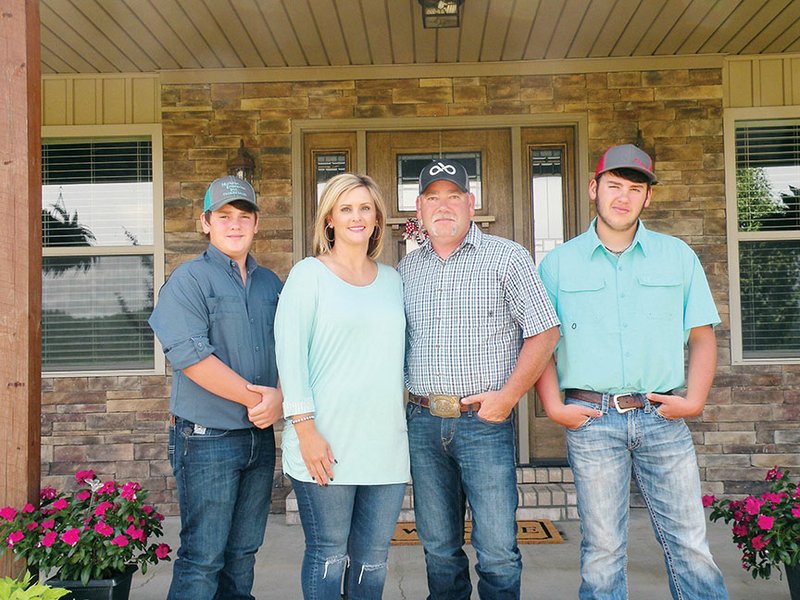 CEDAR CREEK — Travis and Valerie Sims may have had a few bumps along the road as a farm family, but they have persevered. Travis started farming in 1996 with 90 acres, and today, he farms 702 acres.

“The Sims family is a great example of a farm family and what hard work and perseverance can accomplish,” said Hank DeSalvo, vice president and branch manager for Farm Credit of Western Arkansas and chairman of the Conway County Farm Family of the Year selection committee. “Travis and Valerie have worked hard and made the necessary management decisions to grow their operation to where it is today. They accentuate the sacrifices that family farmers make every day to deliver high-quality food to the consumer.”

Travis said the district honor was not expected.

“But it’s been a good experience,” he said. “The judges came out last week (July 16-20), and we showed them around and told them our story. It’s been a neat experience.”

Earlier this summer, Travis said, it was “a great honor to be named Conway County Farm Family of the Year.”

“It’s nice to be recognized,” Valerie added. “It took us by surprise.”

Travis was raised on a cattle farm, a son of Sammy Sims and the late Carolyn Sims. Travis has one sister, Kim Stell of Springfield. He graduated from Center Ridge High School in 1995.

He said his dad built two poultry houses on the family farm in 1996.

“I have basically worked on a farm my whole life,” Travis said.

Travis now owns 102 acres, which includes the 90 acres he started with, and he leases 500 acres in the Cedar Creek community, which is not far from Center Ridge. He built his own poultry houses in 2000.

The family uses 175 acres of its farming operation for hay and the rest for their cattle and broiler operation.

“All hay produced is utilized as feed for our personal cattle operation,” Travis said.

They have four 40-by-400-foot broiler houses that produce an average of 594,000 birds per year. They raise the birds for the Tyson Foods-Dardanelle Complex.

The Sims family has overcome some problems since starting the farming operation.

“Due to uncertainty, I went to work for Costner Excavating Co. to provide for my family,” he said. “After working off the farm for two years, we received a contract to grow from Tyson Foods in 2010.

“Our birds are raised to a target weight of 3.7 pounds over an average of 33 days. After 33 days, the birds are transported to Dardanelle’s processing plant.”

Travis and Valerie also raise 130 head of crossbred commercial cows, 35 head of replacement heifers, three registered Hereford bulls and one registered Ultra Black bull. As of May, they had 85 head of calves and 44 head of feeder cows, as well as five horses and one colt.

“Our calves are marketed at 500 to 600 pounds and sold at Pruitt’s Mid-State Stockyards in Damascus, Arkansas,” Travis said.

“Valerie and I hope to be able to pass our farm down to our boys,” Travis said. Both Will and Cordell indicated that they hope to farm with their dad after they finish school.

Both Will and Cordell are involved in Conway County 4-H activities and have shown beef cattle at the Conway County Fair in Morrilton. Both are active in the Pleasant Springs Missionary Baptist Church youth group, and both participate in the Nemo Vista FFA.

Cordell is on the Nemo Vista High School basketball team and the Center Ridge Baseball Association baseball team. Will is a member of Nemo Vista’s Fellowship of Christian Athletes.

Travis is a member of the Conway County Cattlemen’s Association and the Arkansas Farm Bureau.

Valerie is a member of the Pleasant Springs Missionary Baptist Church Ladies Auxiliary, Arkansas Women in Agriculture and the Arkansas Farm Bureau.

Valerie was born and raised in Conway, a daughter of Doyle and Kathy Glass. The family moved to Conway County when her father became pastor at Pleasant Springs Missionary Baptist Church in Birdtown. She graduated from Nemo Vista High School in 1998 and married Travis in 1999.

Valerie has a sister, Angie Trigg of Jerusalem, and a brother, Jim Glass of Greenbrier.

Valerie is a hairdresser and has a salon on the family’s property. She also sells makeup.

Valerine and her family enjoy hunting.

“We have turkey and deer right here on our place,” she said.

Travis said he is “satisfied” with the family’s farming operation.

“Four houses is just about all we can handle,” he said.

Travis said the family took a short vacation a few weeks ago.

“We floated the Spring River for a few days,” he said. “That was between chickens. … That was our vacation.

“We just got another batch of baby chicks this week. We will grow them for 33 days, then get a break for a couple of weeks before we get the next batch. By that time, the boys will be back in school, so there won’t be another vacation this summer.”