Devastating report has seafood dealer on his heels, angry 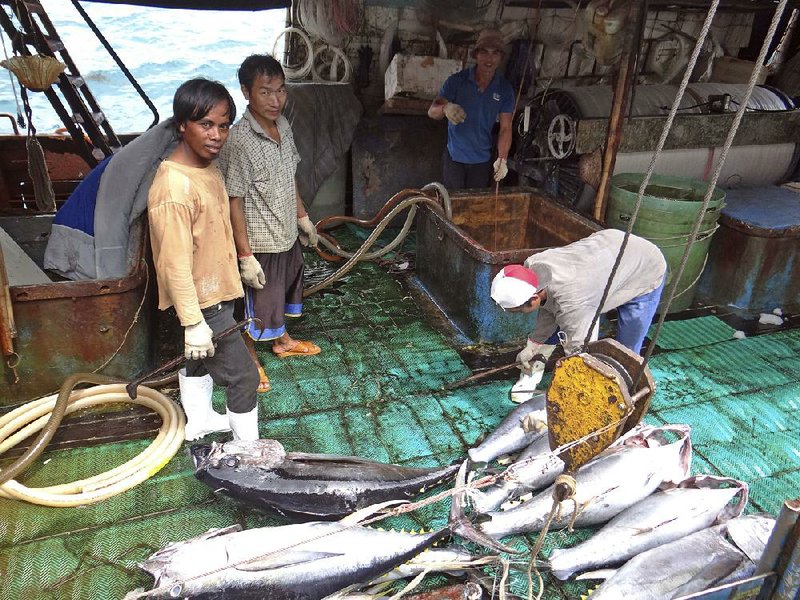 Fishermen at the Majuro port in the Marshall Islands unload yellowfin tuna in February for one of the companies that was providing fish that entered the supply chain of Sea To Table.

NEW YORK -- A national seafood distributor is defending its reputation as sales plummet after The Associated Press found it was not living up to a guarantee that all of its seafood was wild, sustainable, traceable and caught by local fishermen.

Sea To Table owner Sean Dimin said most problems identified by the AP were honest mistakes or the result of miscommunication, and some supporters came to his defense. But four former employees said they raised concerns about mislabeling, the blending of imports and deceptive marketing practices years ago, and were ignored or silenced.

In a global seafood industry that is rife with bad actors, conscientious consumers are increasingly paying top dollar for seafood they can feel good about. The New York-based company attracted clients such as celebrity chef Rick Bayless, meal-kit maker HelloFresh, restaurants and universities, promising all fish could be traced to a U.S. dock and sometimes the fisherman who caught it.

Among other things, the AP found Sea To Table was sometimes working with wholesalers that also rely on imports, providing incorrect dock and boat names, selling farmed shellfish, and offering species that were out of season or illegal to catch. The AP also tracked businesses in Sea To Table's supply chain to labor abuses involving migrant fishermen in foreign waters and destruction of marine life.

A U.S. senator has called for an investigation, and a community-supported fishery filed cease-and-desist orders, demanding Sea To Table stop deceptive marketing.

Dimin hit back, putting out a news release and statements on social media saying his company remained committed to improving the seafood industry. He said he cut ties with his Montauk, N.Y., supplier, Bob Gosman Co., and was working to improve traceability with other partners.

He alleged that some claims in the AP article were misleading or unsubstantiated.

"We have lost over 50 percent of our revenue; our prospective investors have put any possible investment on hold; we have conducted layoffs in an attempt to maintain our viability," he wrote in a series of emails to AP management.

He did not respond to specific questions from reporters seeking clarification about his allegations.

Sea To Table has projected its sales will jump from $13 million last year to $70 million in 2020, according to a 2018 report. Ex-workers, who spoke both on and off the record, alleged that Dimin turned a blind eye to practices that contradicted company promises as he tried to keep pace with this growth.

Dimin called those claims "ridiculous" and "completely without merit."

Jacob Tupper, a former Sea To Table sales representative who comes from a fishing family, said he saw imported tuna being mixed with other fish that was going into Sea To Table boxes in Montauk.

He said he did not see any domestic-labeled tuna while visiting supplier Bob Gosman Co., and alleged Dimin told him to let the boxes go out that day even though they contained fish of unknown origin being sold as local. Tupper said he was assured the problem would be handled, and when a solution was not communicated, he raised the issue in meetings.

"He would get really upset and pull me aside after and say, 'These are things you can address to me, but you shouldn't be asking things like these in front of the whole company,'" Tupper, who quit in 2016, recalled of his conversations with Dimin.

"He never addressed it, and he let it happen," he said. "Then they profited from it."

Hannah Grady said she was new to the job when a chef asked how Sea To Table could provide tuna from Montauk if it had already migrated to warmer waters. She said Dimin told her it been driven from North Carolina, more than 700 miles away, and was labeled as catch from the Long Island seaside town. That ran counter to marketing materials Grady said she had been handing out to customers, promising no seafood was trucked or aggregated.

"You're telling me, that I have bold-face lied to people who trust me?" she recalled asking Dimin.

Grady said Dimin refused to provide the name of the boat that caught the fish, and accused her of damaging morale. She then gave two weeks' notice, but said he told her to leave the next day.

Another former employee, Charlie Trimarco, said that while some boat names were provided by partner docks, others were generated by Sea To Table's computers when he worked there from 2016 to 2017.

Dimin did not respond to questions about these allegations.

Some consumers, foodies and conservationists were angered to learn the distributor had been saying one thing and selling another.

"Oceana, like many others in the community, was duped," said Beth Lowell, a senior director at the conservation group, acknowledging that she started hearing rumblings last year about the company's dubious business practices. "All of this really demonstrates is the need for more transparency in the supply chain."

Others defended Sea To Table, saying it is a leading sustainable seafood company trying to do the right thing in a business where murky supply chains make complete traceability nearly impossible.

"Indeed even if the majority of the AP accusations were true, Sea to Table would still be among the most reliable suppliers of fish to American markets," said Ray Hilborn, a professor at the University of Washington's School of Aquatic and Fishery Sciences, adding that a Sea To Table employee works for him on a part-time basis.

Among the clients Sea To Table has lost in recent weeks was the University of Massachusetts-Amherst, which has yet to decide if it will resume purchases next fall.

"Sea To Table was attractive because it seemed to be a small family-run operation," said Mary Dettloff, deputy director of media relations, adding that the school was concerned about mislabeling and general misrepresentation of product.

Dimin earlier told the AP that during winter months, "Montauk tuna" was actually caught in North Carolina. He said because fish could not be properly graded in the Southern state -- something denied by his partner dock in Beaufort, N.C. -- it had to be delivered by road to New York's Long Island. He said trucking seafood between states stopped in March because it caused confusion for customers.

"Sea to Table and its processes are not yet perfect," Dimin said in a news release, "but we stand committed to driving positive change."