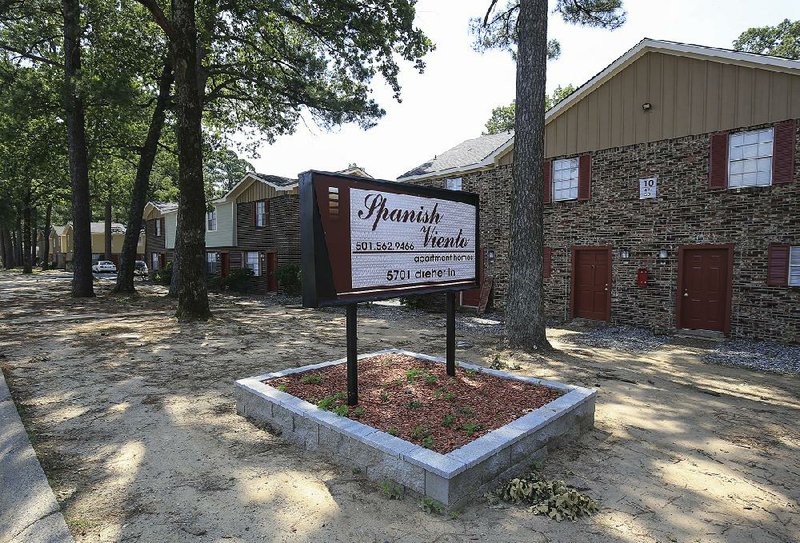 The Spanish Viento apartments at 5701 Dreher Lane in Little Rock sold recently for a reported $20.4 million.

The 109-unit Spanish Viento complex -- formerly the Windamere Apartments -- is at 5701 Dreher Lane in Little Rock. The property includes about 4.5 acres.

The apartments were built in 1972 and appraised at $2.4 million this year. That complex sold for $2.35 million in June last year.

BBR Oil borrowed $11.4 million from West Bank of Des Moines, Iowa, to help finance the purchase. The mortgage, taken out on June 21, matures on Aug. 21.

Wellington at Chenal sold for $8 million in 2014 and was appraised at $8 million this year.

Wellington at Chenal was a former tax credit community, said Richard Cheek, who, along with Ted Bailey III, are owners of The Multifamily Group in Little Rock. Cheek and Bailey follow the Pulaski County apartment market and broker multifamily property sales.

The owners enhanced the signs and the property is very attractive, Bailey said.

Wellington Acquisition borrowed $13.1 million to finance the deal. The mortgage matures in 2028.

Marshall, a member of Palarm Bayou Farm, and Kent Westbrook, as trustee of The Kent C. Westbrook Revocable Trust, signed the mortgage. It matures in 2038.

The buyers are based in Long Beach, Calif. The seller was PB General Holdings Baseline LLC, with Leonard Boen as manager.

The Repertory Theatre used the apartments, built in 1954, to house interns and visiting talent.

Peachtree Opportunity Fund borrowed $756,000 from One Bank & Trust to help finance the purchase.

Brown and Judy plan to use the apartments as a long-term investment, according to a news release from RPM Group, the real estate firm representing Brown and Judy.

The Rep said earlier this year that it was suspending operations because of financial difficulties. Theater leaders said last month that the sale of the apartments would cut the Rep's $1.5 million property debt in half.

Arkansas Federal plans to use the property to build a branch there, although no immediate construction is planned, said Jeff Hathaway, president of the Hathaway Group, the commercial real estate firm that represented Arkansas Federal in the transaction.

The property is next to a new Popeyes restaurant and near a Walmart Supercenter.

When the branch is built, it will contain a full-service banking facility with drive-thru lanes.

"The credit union has had us evaluating opportunities in the Maumelle area for a long time," Hathaway said. "It eventually became clear that it's time for them to serve the market with a new first-class banking center."

David Elrod of Elrod Real Estate represented the seller. Elrod has assisted the seller with bringing Christian Brothers Automotive and other businesses to the same stretch of Maumelle Boulevard, Hathaway said.