After accident that killed 17, including 2 Arkansans, changes urged for duck boats 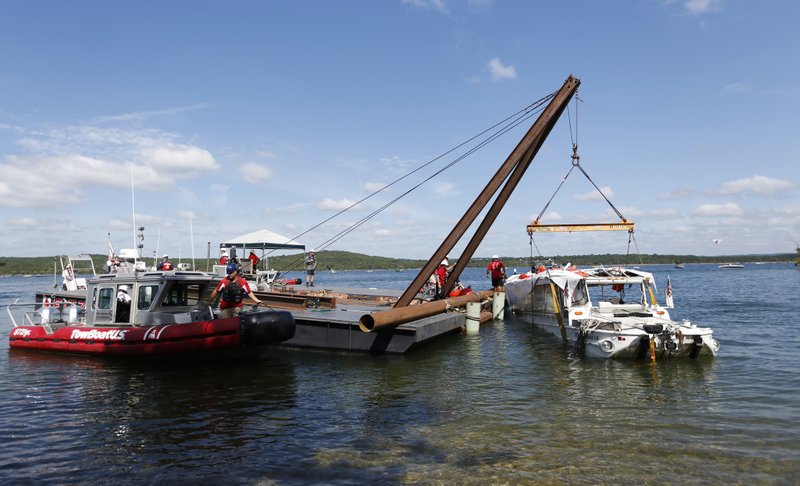 KANSAS CITY, Mo. -- Mary Schiavo read the headlines in horror 19 years ago, when 13 people on a duck boat in Arkansas drowned after it sank in Lake Hamilton.

The former inspector general for the Department of Transportation thought then that Congress and the U.S. Coast Guard should act immediately. They needed to either ban duck boats altogether or crack down on their industry, strengthening regulations regarding canopies on the vessels and enforcing stringent life jacket requirements.

None of that happened.

Then came this month's duck boat accident on Table Rock Lake near Branson. This time, 17 of the 31 people on board were killed, five of them children.

Today, Schiavo is part of a growing chorus of experts, lawmakers and safety advocates who insist that changes to these boats need to be made now, not in a year or two when the federal investigation is finished.

"If people want laws, they need to push for them right now," said Schiavo, a transportation lawyer who was inspector general from 1990-96. "What happens is you have this critical period of time after a tragedy in which you can get action. ... But as soon as Congress isn't under the microscope anymore, it becomes very difficult."

The nation learned that lesson after the deadly duck boat accident on Lake Hamilton near Hot Springs. A long list of recommendations, which the National Transportation Safety Board came out with three years after the accident, was virtually ignored.

"If they had been [implemented], they would have saved this boat," Schiavo said.

In the days since a duck boat sank in Table Rock Lake, one U.S. senator has begun working on legislation to implement the changes recommended 16 years ago, and a Missouri lawmaker said the state needs to have a public hearing to identify what solutions are needed.

And the congressman who represents Branson said duck boats should be temporarily banned while the investigation determines why the vessel sank.

"These vehicles were not designed to haul people. They were World War II vehicles designed to go ship-to-shore and shore-to-ship hauling cargo," said U.S. Rep. Billy Long, a Republican. "They've been adapted over the years, and there's been enough accidents. It's time to cease and desist with them unless they can be made safe."

Missouri's two U.S. senators told their colleagues Tuesday that Congress must do something. Republican Sen. Roy Blunt shared personal details of many of the victims and said the country can't ever go through a loss like that again.

"I don't think it makes sense for us to wait another year to address some of these glaring issues in terms of passenger safety," she said on the Senate floor. "We've had 40 deaths associated with the duck boats since 1999, yet there has been little done to address the inherent dangers of these amphibious vehicles."

Some on the duck boat, an amphibious vehicle that goes from land to water, managed to swim to shore as the boat sank July 19. Others were trapped inside as it sank in murky Table Rock Lake. No one wore a life jacket.

National Transportation Safety Board officials have said they want to know what information the duck boat company and captain had before someone made the decision to take the boat out despite the fact that the National Weather Service had issued a severe thunderstorm warning. Federal investigators also want to know why no one on the boat was wearing a life jacket.

The safety board has custody of the vessel. But it will likely be more than a year before the investigation is complete and full details are known about that night.

Long said Congress needs to wait for investigators to complete their job and find out exactly what went wrong and why. A preliminary report should be finished in a couple of weeks, he said.

"And then see if these boats can be made safe," Long said.

Others say it's already obvious there are some fixes -- recommended 16 years ago -- that must happen now.

Those include installing backup buoyancy to keep a boat from sinking if it starts to take on water; eliminating canopies when the boat is in the water; and requiring life jackets, at least for children.

Yet before legislation is crafted and enacted, companies that operate duck boats across the country must begin to police themselves, said Missouri state Rep. Bill Reiboldt, a Republican who serves as chairman of the House Transportation Committee.

The includes implementing limitations when it comes to storm warnings and wind, he said.

"You learn from tragedies," Reiboldt said. "Seventeen people lost their life. Let's not put anybody else at risk."

The duck boat industry's first modern catastrophe occurred in May 1999, when the Miss Majestic began taking on water on Lake Hamilton. According to the eight survivors, it sank within 15 seconds to a minute.

The National Transportation Safety Board's investigative report, released in 2002, made its recommendations on how to improve safety.

Several months after the disaster, the safety board held a forum with the Coast Guard and the duck boat industry.

"One major outcome of the forum was the realization by participants that amphibious vehicles pose unique and unresolved safety risks to the public, but that the vehicles could be made safe by installing safety features that would prevent them from sinking when flooded," said a 2002 letter from the safety board to U.S. Coast Guard Commandant James Loy.

A naval architect company attended the forum and showed how duck boats could be retrofitted with foam and bulkheads that would keep the vessels afloat when flooded and fully loaded with passengers.

Cost estimates at the time, though, indicated it would require about $2,000 per duck boat to install foam and bulkheads, plus another $10,000 for detailed engineering of the installations.

The safety board said that three companies in the duck boat industry were trying to make those improvements but that others complained about the difficulty of making the installations.

The agency upbraided the industry's reluctance to adopt safety improvements and called on the Coast Guard to require the changes.

"Because the industry has, by and large, refused to take voluntary action to address this risk, the Safety Board considers it imperative that a regulatory authority takes steps to ensure that all amphibious passenger vehicles will not sink in the event of an uncontrolled flooding event," the letter to Loy said.

When the safety board proposed its duck boat safety recommendations in 2002, Schiavo said, "almost every operator lobbied against the rules."

Even though there had been 18 accidents involving amphibious passenger vehicles between 1991 and 1999, it wasn't until the Miss Majestic case that the Coast Guard started developing nationwide "guidance" to advise field inspectors in charge of duck boats, according to the safety board.

"The idea that the Coast Guard did not take action after the 1999 MISS MAJESTIC casualty is a mischaracterization of Coast Guard actions," Alana Miller, an agency spokesman, said in an email.

The primary action, Miller said, was the creation of a document that offered extensive guidance on stability, canopies and egress procedures. It also included guidance on other critical issues that were examined during the Miss Majestic investigation.

But when the Coast Guard issued that guidance, called the Navigation and Vessel Inspection Circular, the safety board found that the document did not "adequately address important safety concerns."

The safety board also pointed out that "it is only an advisory document."

In 2016, the safety board again called on the Coast Guard to adopt new safety standards.

That was in response to a 2015 incident in Seattle in which a duck boat was traveling on land when a mechanical failure caused it to cross into oncoming traffic. The vehicle collided with a bus, killing five passengers and injuring 69 others.

In addition to again making recommendations to the Coast Guard, the safety board specifically addressed the Passenger Vessel Association, a national trade organization, urging it to pass along suggestions to its members.

The recommendations included encouraging members to learn lessons from the Seattle incident, in which the operator was accused of poorly maintaining the vessel; completing proper maintenance; and keeping up with service bulletin repairs. The safety board also told the association to have passengers buckle their seat belts while the vessel was on land and unbuckle them upon entering the water.

And the safety board advised the association to have a separate tour guide to make sure its drivers weren't distracted.

It's not clear whether the Passenger Vessel Association passed those recommendations along to its members. The association did not respond to multiple requests for comment.

Even if Congress doesn't require the duck boat industry to change, the Coast Guard could, said Schiavo, the former inspector general.

"The Coast Guard could easily say no canopies on these boats when they enter the water, and everybody 13 and under has got to be in a vest," she said of the agency's authority to issue federal regulations. "It's easier for Congress to do it, but the Coast Guard could do a rulemaking."

When asked about that, the Coast Guard's Miller said the agency "does have federal regulations for recreational boating pertaining to life jackets." She said, however, that those regulations don't cross into commercial vessels where there are "several built-in safety measures pertaining to egress, life jackets and stability to name a few."

The Coast Guard did implement a regulation in 2011, when it amended its rule on the maximum weight and number of riders that may be permitted on board a passenger vessel to better reflect the reality of the U.S. adult population. The regulation increased the assumed average weight per person from 160 to 185 pounds.

But the Coast Guard received pushback from Ride the Ducks International, which at the time operated duck boats in several states. When the Coast Guard began studying the change in 2006 and put out a request for public comments, then-company President Chris Herschend responded in opposition.

He wrote that while the company supported the goal of increasing passenger weight standards, it was concerned about the implication of "such a dramatic change on such short notice."

"We routinely run at capacities higher than what the measures in the Notice would allow," he wrote, adding that its boats "carry a disproportionate number of children and students relative to the general population and aviation industry standards upon which the proposed weight standards are based."

Complying with the proposed standards would be extremely costly for the company, Herschend said.

Calls and emails to representatives of the Herschend family were not returned.

Some say a cozy relationship between the industry and its regulators is a big reason why safety improvements haven't been made.

Even in his opposition letter, Herschend said his company considered its relationship with the Coast Guard "to be among our most valuable assets."

"We are in contact with your organization on a near-daily basis," he said. "And I believe your team would affirm our team's commitment to excellence, safety, and concern for the public welfare [not just our own]."

Information for this article was contributed by Mara Rose Williams and Tess Vrbin of the Kansas City Star.