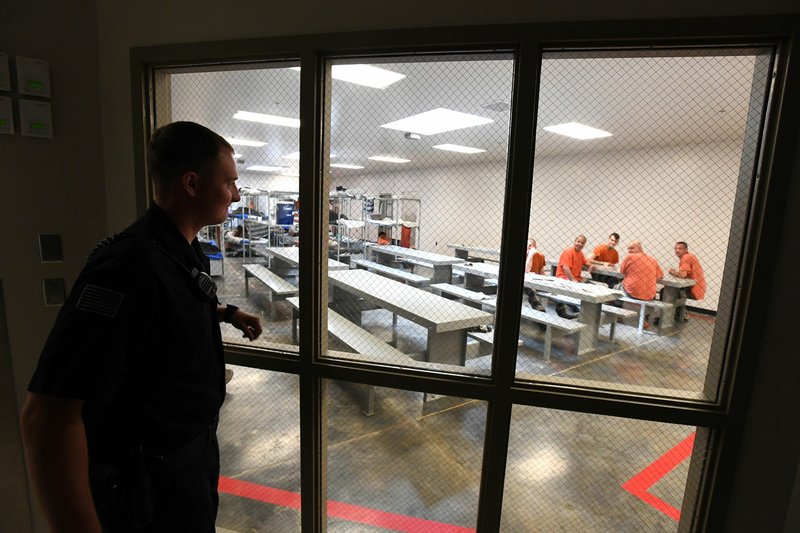 Deputy Chance Gregory watches inmates in May 2017 at the Benton County Jail in Bentonville. The Sheriff's Office recently announced it would end in-person visits at the jail Sept. 1 in favor of video visits that will have a fee attached to them.

BENTONVILLE -- Mari Vought prefers to go and visit her son in the Benton County jail and doesn't want to chat with him on a video screen.

"I really like going to see my son in person, even through the glass," Vought said Tuesday as she visited her son in jail. "I guess I'm old-fashioned. I want to see him face to face."

The Benton County sheriff's office recently announced it would end in-person visits at the jail Sept. 1 in favor of video visits with a fee attached to them. The change, however, may be delayed, Sgt. Shannon Jenkins, the public information deputy for the sheriff's office, said later. The jail is considering adding a kiosk in its lobby so people can come to the jail and visit by video for free.

People on both sides of the justice system agree adding video visits as another option is good. Inmate advocates just don't believe it should be the only option.

Holly Dickson, the legal director for American Civil Liberties Union of Arkansas, said studies show people who have been jailed do much better once released and may not re-offend if they continue to have the support and contact with their families.

Restricting visitations seem to be the wrong route, Dickson said.

The system allows someone to visit a detainee using a computer, tablet or cellphone through the website smartjailmail.com.

Inmates will do their visits at kiosks in their pods. They also use the machines to send email to friends and family members. Each email costs 50 cents.

Benton County plans to allow inmates two visits on any day, including holidays, each week. All visitations will be monitored and recorded.

"In-person visits should not be eliminated over money issues," Bertram said. "It is more likely that people will return to jails without a solid family foundation."

Graves said the video visitation, which is provided by Securus, is another option a person could use, instead of visiting a prison on one of the regular visitation days -- a Saturday or Sunday.

Lt. Cody Burk, a spokesman for the Pulaski County sheriff's office, said it has only in-person visitation and has no plans to make any changes.

The Washington County sheriff's office started using the online visitation portion of the Smart Communication system July 18. Kelly Cantrell, a spokesman for the sheriff's office, said it is still in the process of working out a few bugs during the transition process.

Jenkins said the video visitation would allow inmates to have more contact with family members because they will be able to communicate with relatives and friends living in other states.

She said paid video visitation may be a money saver for some who drive a long distance to Bentonville to visit someone in the jail.

Vought, who was visiting her son in jail, said she's concerned some people will not be able to afford the 50 cents-per-minute charge. Two 15-minute calls a week would cost $15 and eight 15 minute calls in a month is $60.

"It's going to cost 50 cents per minute to look at him through some Skype machine," she said. "Forget it. That's ridiculous."

Bertram also questioned the costs and believes the fees will hurt the poor.

"Skype for me and you is free, but it may be a huge barrier because some people just can't afford the fees," she said.

Bertram said they recommend jails have in-person and video visitation that would give people more time to communicate with their family and friends.

Jail visitor Dennis Arrington of Fayetteville said Thursday that the fees for the video visitation, especially if there's not a free option, would be a hardship on many people.

"Most people visiting probably are monetarily strapped," Arrington said. "There are not many rich people locked up in the jail."

Arrington said he believes there should be visitation allowed at the jail and at no charge because the video option could be too expensive for some people.

Arrington was concerned what would happen to the people who didn't have a computer or smartphone if the jail didn't allow any other form of visitation.

Benton County's Jenkins said video visitation will help reduce contraband getting into the jail. Fewer people at the facility means there's a smaller chance of someone bringing contraband on the grounds and it getting into an inmate's hands.

Jenkins said the online visits also create less work for deputies and relieve some safety concerns because inmates will no longer have to be moved around the jail for in-person visitations.

She said she has seen studies where the video visitation had no impact on contraband in jails, but she did see where misbehavior and violent incidents increased because of the lack of family contact.

Dickson said many people are being held in jails and they haven't been convicted of any crime. Dickson said those individuals are being held because they can't pay the bond and restricting their families from visiting is added punishment.