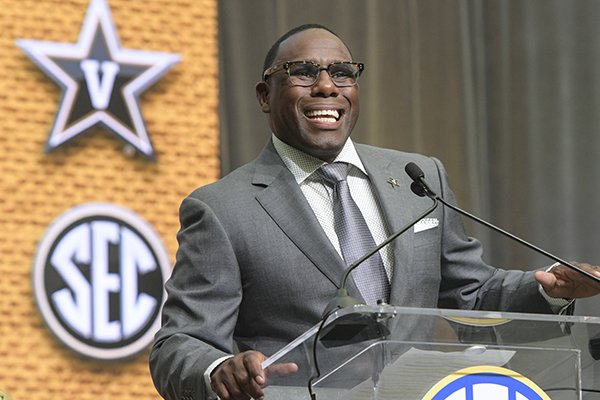 ATLANTA -- If you're happy and you know it, talk like Derek Mason at SEC media days.

Mason, the fifth-year head coach at Vanderbilt, spoke with glee about the wave the Commodores are riding entering 2018.

Vanderbilt at a glance

SEC title scenario The Commodores are one of many Eastern Division teams seen to be on the upswing, so to think they could outperform the other risers and challenge Georgia would seem like a stretch. However, the return of the QB Shurmur and the best depth in Mason’s tenure give the Commodores’ hope they can return to a bowl game.

"I look at our depth and say it's as good as it's ever been," Mason said. "For us, the depth is there, the athleticism is there, the leadership is there. I believe it's our time.

"He's awesome," senior Kyle Shurmur said. "A motivator. I love playing for him. He gets us ready to play and I'd run through a wall for him."

The Commodores, a traditional doormat in the SEC and over the last quarter century in the SEC East, have had periodic upswings that have led to bowl bids and upper-division finishes in the conference. Mason thinks this could be another of those times, for several reasons.

"I'm happy to relinquish the title of defensive coordinator," Mason said. "For me, it's important to get the right guy. It has been almost three years in the making, two years in the chase, but I finally got my guy, Jason Tarver, who came from the San Francisco 49ers, was with me at Stanford, same pedigree. We're the same guy, probably grew up in the same household. We just look a little different."

Tarver, who spent 16 years in the NFL with the 49ers and Oakland Raiders, has the ability to make complex football seem real easy, Mason said.

"His energy, his passion, his attention to detail, his coaching style [are] very similar to mine, but I believe his football IQ and what he's been able to do over the last four months in terms of solidifying our defense has been the mastery that's Jason Tarver," Mason said.

The Commodores increased their win totals in three successive years under Mason, from 3-9 in his debut season of 2014, to 4-8 and 6-7 before falling back to 5-7 last year.

Vanderbilt experienced a big mid-season dip after a promising start. The Commodores opened 3-0 and were on the brink of making the top 25 after a 14-7 victory over Kansas State before falling 59-0 at home to No. 1 Alabama.

The Commodores wound up losing five in a row by an average score of 46-20 with setbacks after Alabama to Florida, Georgia, Ole Miss and South Carolina before going 2-2 in their last four games, including a season-ending 42-24 victory at Tennessee.

Mason said as the defensive coordinator he overreacted to the blowout loss to Alabama poorly by trying to grind the team harder when it didn't need it.

"You can't let one [loss] become two become three become four in this conference," he said. "And that's what I did. That is me being too much of a boots on the ground guy and not seeing it from a birds-eye view.

"I feel like I cost our guys because we went into the season last year with high expectations. We started the right way. We let one become two become three become four. That's on me."

Shurmur, the son of New York Giants head Coach Pat Shurmur, ranks No. 5 among returning SEC quarterbacks with 228 yards of total offense per game, and No. 3 among returners with 235 passing yards per game. His efficiency rating in 2017 was 137.6 however, one of the lowest among SEC starters.

He'll be protected by a full complement of returning starters on the offensive line, led by seniors Bruno Reagan, Justin Skule and Egidio DellaRipa.

"We're returning all five on the offensive line so my expectations are high," Skule said. "There are playmakers all around the board, so we've got to do our job protecting the holes and letting them do their jobs."

"I think you grow through experience," Shurmur said. "Being on the field and learning by trial and error, I think has helped a lot of guys on our offense grow over the past few years."

Veteran safety LaDarius Wiley thinks the Vanderbilt offense is in good hands with Shurmur at the helm.

Wiley and the Vanderbilt defenders understand the necessity of improving after allowing 31.3 points and 393.1 yards per game last year.

"It'll still be tenacious and all-gas, no-brakes style," Wiley said. "We go off the principles of extreme violence, getting to the ball and being playmakers.

Mason described himself as an unseasoned head coach in 2014 who had to learn through adversity how to become a better head coach and a better man.

"I'm excited about year five," he said. "I'm back where I started. I'm a head coach again, head coach only. So that's fun for me.

"I believe my vision now is much different than it was five years ago when I stepped into this program. So now I'm ready to coach. Our guys are ready to play. Like I said, it is senior led, not coach led when you get between the white lines, so let's ride."