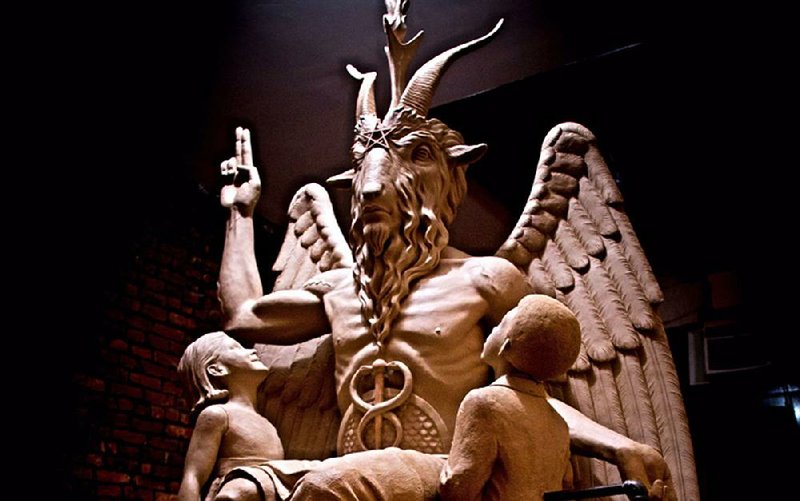 This 2014 photo provided by The Satanic Temple shows a bronze Baphomet, which depicts Satan as a goat-headed figure with two children.

The Satanic Temple says it will bring its 7½-foot bronze Baphomet statue to the state Capitol in Little Rock as part of a protest next month to defend religious freedom.

The rally, planned for Aug. 16, “is intended to bring together religious leaders of different faiths to discuss the importance of the First Amendment and its protection for religious pluralism,” the group said in a news release.

“Freedom of Religion means that the government must not be allowed to endorse one religion over another or inhibit any religious voices from access to public forums in favor of another,” Satanic Temple spokesman Lucien Greaves said.

Greaves, who uses a pseudonym, added that the protest “isn’t a rally of secularists versus people of faith, Satanists versus Christians, or outsiders versus Arkansas.”

Lawmakers have blocked the group’s efforts to place a statue of Baphomet — a part-man, part-goat deity — alongside the Ten Commandments monument at the state Capitol.

"While [a bill requiring legislative sponsorship for monuments] prevented the Baphomet statue from being considered, ironically it only magnifies the degree to which the State legislators are endorsing one religion over others," the organization said.

Earlier this year, lawsuits were filed seeking the removal of the Ten Commandments monolith, which was re-installed on the grounds in April. Secretary of State Mark Martin has called members of the organization “a notoriously transparent front for ‘trolling pranksters’ who sue ‘fake and ambiguous names.’”

The organization describes itself as “an organized religion” with a mission “to encourage benevolence and empathy among all people.”