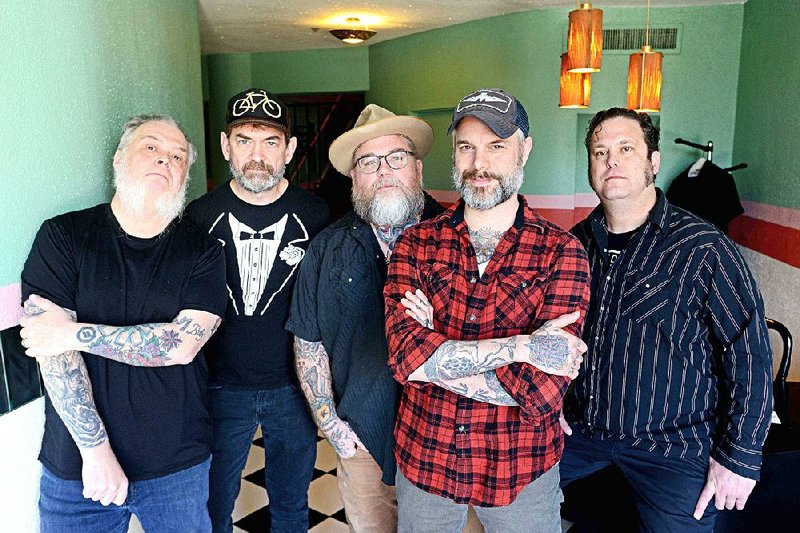 It has been 20 years since Lucero got off the ground over in Memphis with a loose mixture of booze-soaked alt-country and the sort of youthful optimism born from an almost unhealthy belief in the powers of rock 'n' roll.

The group -- guitarist Brian Venable, bassist John C. Stubblefield, drummer Roy Berry, keyboardist Rick Steff (who joined in 2006) and Little Rock-born frontman/guitarist/songwriter Ben Nichols -- has grown from the jangly, underdog barroom ballads of its early days through horn-soaked Southern rock and into what might now be called its mature period.

On 2015's All a Man Should Do, the band mostly left the horns and ragged edges behind and came up with a smoother, more reflective collection. That sound is even more fleshed out on the group's excellent new album, Among the Ghosts, available Friday on Nashville, Tenn., label Thirty Tigers.

The record is heavily influenced by the 43-year-old Nichols' marriage to wife Nina and their 2-year-old daughter, Izzy.

For a band whose catalog includes some of the finest ever heartbroken-loser-singalongs -- "My Best Girl," "Nights Like These," "Hold Me Close," "I'll Just Fall" -- Nichols' domestic bliss had some fans worried. How could he write about girls and getting wasted if he was, you know, all happy?

Oh, fret not, Lucero enthusiast. The gravel-voiced Nichols may have settled down, but he still has anxieties and insecurities and they have made their way onto Among the Ghosts, the group's ninth studio LP.

"The stakes are a lot higher now with a family. There's something to lose," Nichols says during a telephone interview from Ohio, where his wife's family is from. "There's a kind of fear I've never known before. As happy as I am, there is a flip side to that coin. Some of that darkness might have ended up on this new record."

The title track, which opens the album, finds Nichols lamenting about being on the road and away from home and bursts into a chorus that induces chill bumps. It's a subject he has dealt with since at least "Coming Home," from 2003's That Much Further West. The imagery of ghosts that he uses and knowing he's singing about family adds layers of depth to the new track.

Speaking of timelessness, Nichols cribbed the title to "To My Dearest Wife," from a Civil War soldier's letter home. The song is a rousing account told from the point of view of a soldier on the battlefield that incorporates Berry's martial beat and part of "The Battle Hymn of the Republic" as a bridge.

Lyrically, Nichols says, "I wanted it to apply to any war or time period, or any battle you're fighting."

Among the Ghosts isn't just about family matters or separation. Nichols stretches into storytelling, something he has dabbled with in Lucero and on his solo EP, 2009's Last Pale Light in the West, a concept album inspired by Cormac McCarthy's novel Blood Meridian.

Songs like "Cover Me," about an Old West shootout with echoes of Butch Cassidy and the Sundance Kid, and "Loving," which first appeared on the soundtrack to the film of the same name about an interracial couple that was directed by Nichols' younger brother, Jeff, are standouts.

"I wanted to have songs where the narrator isn't necessarily myself," he says.

Michael Shannon, the actor who has appeared in all of Jeff Nichols' films, also shows up ominously reading Ben Nichols' discarded lyrics on the emotionally heavy, brooding, "Back to the Night.'

The closing track and first single, "For the Lonely Ones," is a Lucero ripper that will surely become a live staple and features a wicked solo from Venable.

"It's a really fun song," Ben Nichols says. "It sticks out. Everything else fits really nice, and at the end, you've got this upbeat, rock 'n' roll song. It works well for the record, and doesn't leave you wallowing in the darkness."

Among the Ghosts was co-produced by the band and Matt Ross-Sprang (Jason Isbell, Drive-By Truckers, Margo Price) at Sam Phillips Recording Service in Memphis. It's the first time since 2006's Rebels, Rogues & Sworn Brothers, that the band has recorded without producer Ted Hutt.

"I really enjoyed making our last three records with Ted, and we learned a lot," Nichols says. "Ted's a very hands-on producer. He wants demos in advance and he's at rehearsals. It's intense."

Working with Ross-Sprang between tours, the band recorded mostly live in the studio in a more laid-back environment.

"We just set up on the floor at Sam Phillips," Nichols says. "I had a couple of guitar parts and we just kind of figured out what clicked and what didn't and let the songs guide the way. It was a much more relaxed atmosphere."

Lucero, no surprise, will be on tour through the rest of the year, with stops across the United States before heading to the United Kingdom in December, banging out their classics and the new material. There are no Arkansas dates, but Nichols is scheduled to perform solo and appear with brother Jeff in Little Rock during the Filmland event in late August.

After 20 years together, racking up countless miles and their fair share of tattoos, Nichols and the rest of Lucero have seen a generation of fans grow up with them and have picked up new ones along the way.

"It's amazing they've stuck with us for so long," he says. "Our fan base is extremely loyal and we're lucky to have them. It allows us to get away with this as a job, which still boggles our minds."