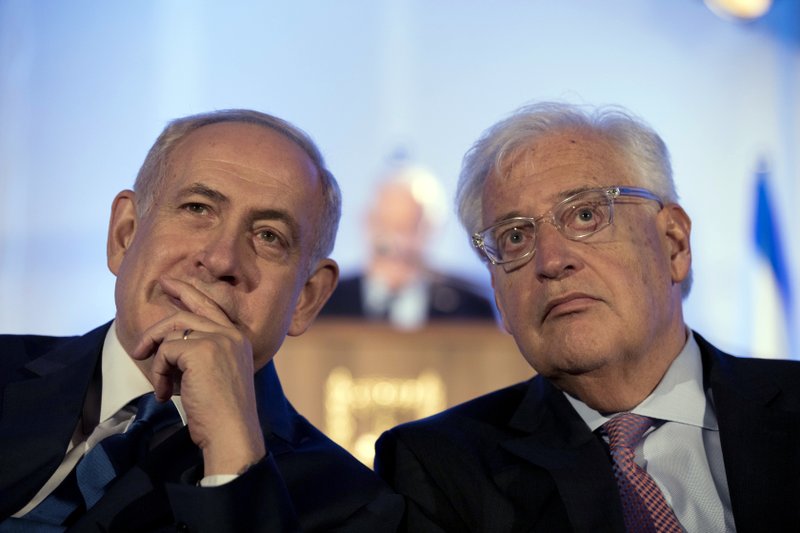 FILE - In this May 21, 2017, file photo, Israeli Prime Minister Benjamin Netanyahu, left and David Friedman, right, the new United States Ambassador to Israel attend a ceremony celebrating the 50th anniversary of the liberation and unification of Jerusalem, in front of the walls of the Old City of Jerusalem. (Abir Sultan/Pool Photo via AP, File)

Any move to downgrade the autonomy of the U.S. Consulate General in Jerusalem -- responsible for relations with the Palestinians -- could have potent symbolic resonance, suggesting American recognition of Israeli control over east Jerusalem and the West Bank. And while the change might be technical and bureaucratic, it could have potentially significant policy implications.

As president, Trump has departed from traditional U.S. insistence on a "two-state solution" for the Mideast conflict by leaving open the possibility of just one state. As his administration prepares to unveil a long-awaited peace plan, the Palestinians have all but cut off contact, enraged by Trump's decision to move the U.S. Embassy to Jerusalem.

The deliberations come as Friedman, who has pushed for changes to the consulate since he arrived in Israel last year, faces growing indignation in the U.S. over partisan comments and other actions in which he has publicly sided with Israel over its critics. On Thursday, a top Democratic lawmaker even suggested Friedman should be recalled after he waded into domestic U.S. politics on Israel's behalf, telling an Israeli newspaper that Democrats have failed to support Israel as much as Republicans.

For decades, the Jerusalem consulate has operated differently than almost every other consulate around the world. Rather than reporting to the U.S. Embassy in Israel, it has reported directly to the State Department in Washington, giving the Palestinians an unfiltered channel to engage with the U.S. government.

That arrangement was relatively clear-cut before Trump moved the embassy. Until Trump's decision in December to move it from Tel Aviv, the United States did not recognize Jerusalem as Israel's capital. The Jerusalem consulate provided services to Americans in Jerusalem and also served as the de facto U.S. embassy to the Palestinians, who claim east Jerusalem for the capital of a future independent state.

But since Trump last month moved the embassy to Jerusalem, the situation has become more complicated. Now the U.S. maintains an embassy in one part of the city and a separate consulate less than a mile away, potentially creating confusion about who has ultimate authority if, for example, an American citizen needs help and turns to the U.S. government.

No final decision has been made about what changes to make to the consulate's chain of command, a decision complicated by the consulate's unique circumstances. But the embassy, run by Friedman, is expected to end up with ultimate authority over the consulate, officials said. They weren't authorized to discuss the matter publicly and requested anonymity.

Dan Shapiro, the former U.S. ambassador to Israel, said such a move would be perceived as undermining Palestinians' claims to sovereignty and statehood aspirations, because it would suggest that Washington considers the Palestinian Authority to be under Israel's jurisdiction. Otherwise, Shapiro said, why would it expect the Palestinians to talk to the U.S. through its mission to Israel?

"They don't want to deal with the U.S. embassy to Israel as their channel," said Shapiro, now a scholar at Israel's Institute for National Security Studies. "They want their voice to be heard directly in Washington."

Friedman has advocated for having the embassy in Jerusalem subsume the consulate, officials said, although the State Department has ruled out that possibility. Other possibilities include allowing the consulate to retain some day-to-day authorities while letting the embassy set the direction for major policy decisions.

It wasn't clear precisely when the changes would be made, although one official said the administration is waiting until current Consul General Donald Blome leaves Jerusalem over the summer, possibly in July.