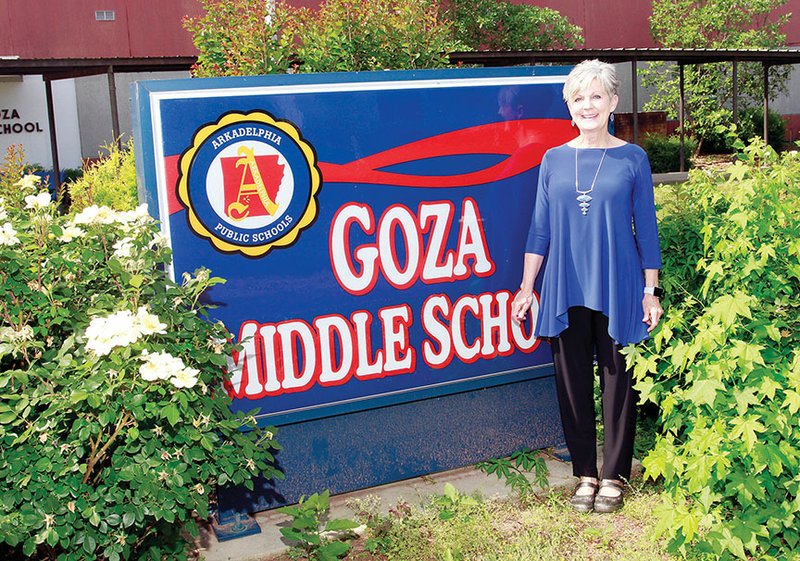 Angela Garner will retire June 30 after a 41-year career in education. A native of Prescott, Garner has been principal of L.M. Goza Middle School in Arkadelphia for the past 16 years.

Angela Garner, 63, will retire June 30 as principal of L.M. Goza Middle School after more than four decades in education.

“It’s bittersweet,” Garner said, as she wiped a few tears from her eyes.

“I love my job. I’ve been in education for 41 years. … I think that’s enough for me. It just seemed to be a good time to retire,” she said.

“We are building a new middle school, but it is still about two years away from being ready,” Garner said. “By then, I would be 65, which is the usual age of retirement. … Forty-one years is a long time.

“Goza is the best school in the universe. I will miss it.”

Garner and her husband, Randy, who is retired from Ouachita Baptist University and is the music minister at Second Baptist Church, plan to relocate to Clarksville.

They have one daughter, Shay Morgan. She and her husband, Mark, have two children, Kate, 3, and Luke, 9 months.

” We want to spend as much time as we can with them,” Garner said.

She said Shay is a registered dietitian at Johnson Regional Medical Center, and Mark works on the family farm, which includes cattle and hay, as well as their Peach Pickin’ Paradise. “They were named the 2016 Arkansas Farm Family of the Year,” Garner said.

“We are going to begin a new season in our lives. If a door opens for me to teach again, I will go through it. I am not burned out on teaching. I love what I do. I can still work and probably will,” she said.

“Only time will tell. I’m leaving the school in good shape. This has been a wonderful school district to work for. I’ll always be a Badger,” Garner said.

“And I may pick a peach or two,” she said, laughing.

Garner was born in Prescott, a daughter of the late Pearl Cornelius Payne and Buster Payne. Garner has one brother, Mike Payne of Bella Vista, and one sister, Becky Buchanan of Texarkana.

“I taught in Prescott for 2 1/2 years before moving to Arkadelphia. I taught physical education and music for a half year, then fourth-grade math for two years,” she said.

“We moved to Arkadelphia in 1979. I taught sixth-grade at Peake Elementary School for 15 years, and five of those years, I was assistant principal.”

Garner said she came to what was then Goza Junior High School and taught eighth- and ninth-grade pre-algebra and algebra for three years, then served as principal for 16 years.

She said it became Goza Middle School in 2001.

“Those are the best years,” she said. “I love the middle school … sixth, seventh and eighth grades. You have to be a little nutty to love middle school. … I am just a little bit nutty.

Garner said one of the biggest challenges to her as a principal has been the paperwork.

“Keeping up with the changes in testing has been challenging,” she said. “Our school was once on the ‘needs-improvement’ list, but we worked our way off that.

“One thing we have done is to become data-driven. Every student has a data card so we can follow them after each testing. We are now able to be up close and personal with all of our students. We know what they need to improve on for the next testing. This will help improve our academic levels. We want all students to be high-achieving learners. We want to see all our students achieve success.”

Garner said that as a kid, she always wanted to be a basketball coach.

“I played basketball in high school. We won the state title in 1971. I lived and breathed basketball. My brother and sister were both coaches. My parents did not want me to be a coach.

“But I think I have been a coach, just not a basketball coach. I’ve coached a lot of students and teachers. I’ve fulfilled my dream,” she said.

Nicole McGough, vice president of business development at Patterson Federal Credit Union, taught at Goza Middle School for 15 years, and Garner was her principal for 13 of those.

“Angela was fantastic to work for, and I know that she will be missed by so many people,” McGough said. “She has a passion for education and a level of energy that made her inspiring and fun to work for. Beyond the way that she led the school and managed students, Angela always made the staff feel like family to one another. The culture that she created made Goza a wonderful place to work.”