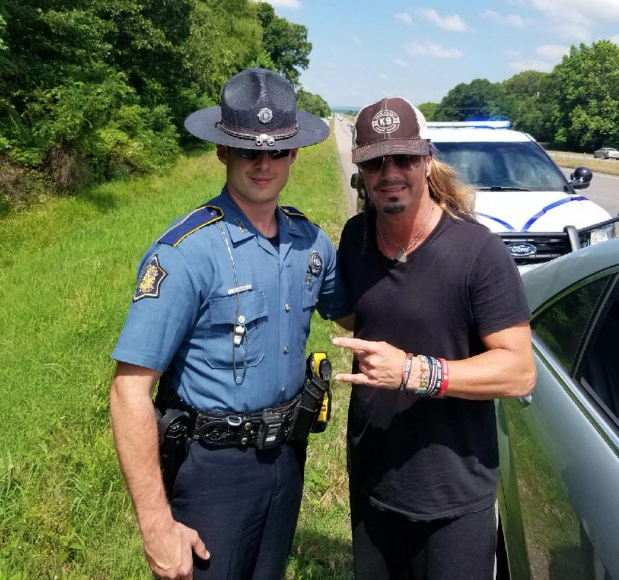 An Arkansas trooper was shown "Nothin' But A Good Time" when he met Poison's lead singer Bret Michaels during a traffic stop last week.

On Saturday, Arkansas State Police released a photo on Facebook of trooper Deston Linkous with Michaels, who was in a vehicle traveling east on Interstate 40 on Tuesday and was headed to a concert with Cheap Trick and Pop Evil that night in Nashville, Tenn.

The show was eventually canceled because of weather but rescheduled for June 28, according to Michaels' Facebook page.

The agency's post, which had nearly 1,000 shares by Monday evening, states that the trooper "ran in" to Michaels and thanked him for his longtime support of law enforcement.

"As an ASP trooper, every day you come in contact with people from different walks of life: People heading home from work, traveling across the country and sometimes people on their way to headline concerts," the post said.

Agency spokesman Bill Sadler said that Michaels was a passenger in the vehicle, which was likely pulled over for crossing a traffic lane. There were no indicators of impaired driving, and the driver was let off with a warning, according to Sadler.