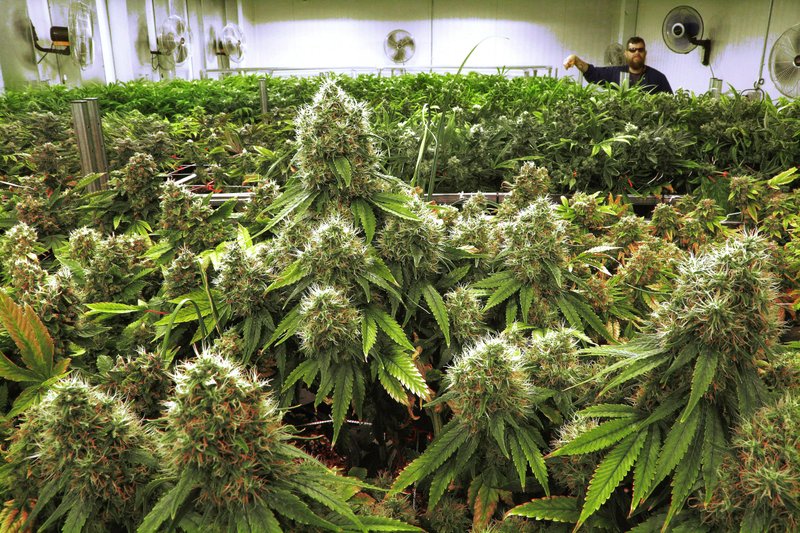 The Arkansas Supreme Court this week will hear oral arguments on the controversial rollout of the state's medical marijuana program, but the legal issues before the justices reach beyond the drug that Arkansans voted to legalize nearly two years ago.

In addition to deciding the fate of Arkansas' first medical cannabis growing licenses, the legal community is also bracing for a ruling that could offer more clarity on the questions of when and how the state can be sued as well as drawing boundaries for state licensing agencies.

Chiefly, though, the suit is the court's first look at Amendment 98 to the Arkansas Constitution, which voters approved in 2016 to legalize medical marijuana.

The implementation of the amendment has been slow, and this lawsuit, filed and joined by several companies that were denied cultivation permits in March, brought the process to a halt.

The state Supreme Court agreed to expedite its review of the case, and attorneys expect the court to render a decision by the end of the month when the court takes its summer break.

Its ruling, attorneys agree, could go a variety of directions -- either slowing down or speeding up the introduction of the drug into the marketplace.

"It's hard to predict, and there's a lot of different arguments being lodged by both sides," said Alex Gray, an attorney for the Arkansas Medical Marijuana Association. "But the court's decision on this case is going to have a significant impact on the timeline of when patients are able to get their medicine."

The matter before the high court stems from the state's appeal of a March order by Pulaski County Circuit Judge Wendell Griffen siding with Naturalis Health -- one of the 90 unsuccessful applicants for a cannabis growing permit.

However, unsuccessful companies have argued that the redactions didn't adequately strip information that could be used to identify the people behind each application, and at least two commissioners had conflicts of interest that may have affected how they scored the proposals.

Griffen agreed, ruling that the situation created the appearance of bias.

On appeal, state attorneys disagreed, arguing that the redaction process was adequate. They also claim that even if the redactions fell short, the "appearance of bias" standard doesn't apply to agency licensing decisions.

"Extending the 'appearance of bias' doctrine to this case would require extending it to essentially every nook and cranny of state government; it would be an unprecedented, unnecessary, and unsupported extension of the doctrine," the state wrote in its appeal.

Josh Silverstein, a law professor at the University of Arkansas at Little Rock William H. Bowen School of Law, said state governments in Arkansas and around the U.S. are already too lax in dealing with bias.

The commission also stopped scoring more than 220 dispensary applications after Griffen's ruling, and Gray said the Supreme Court's decision will provide commissioners direction on how to proceed with that process. All the medical marijuana to be sold in Arkansas will be grown and processed in state.

The state's arguments on appeal also raise the question of whether licensing agencies must independently verify the sworn assertions in applications. Griffen's ruling faulted the Alcoholic Beverage Control Division for not independently verifying that each proposed cannabis growing facility was located far enough away from schools, churches and day care centers.

Griffen also declined to grant state attorneys' motion to dismiss Naturalis' suit on grounds of sovereign immunity -- the principle that the state can't be sued, as stated in the Arkansas Constitution.

The legal community has been anxiously awaiting more rulings addressing sovereign immunity defenses by the state after the high court ruled in January that the General Assembly can't pass laws that waive sovereign immunity.

State attorneys concede that they can't invoke sovereign immunity in cases in which a state official or agency is acting illegally or unconstitutionally, but they contend it does apply in this case.

Concluding its appeal, the state argued that Griffen held its preliminary injunction hearing without proper notice and issued an overbroad injunction.

"The circuit court's overbroad injunction must be reversed and this case dismissed with prejudice," the appeal reads.

By holding oral arguments on Thursday, Silverstein said the court can focus on areas of disagreement among the case parties, which often argue past each other in written briefs.

The number of oral argument requests granted by the state Supreme Court this year has dipped, an Arkansas Democrat-Gazette analysis of court data earlier this year found. However, none of the justices have said why.

"You can really pin down precisely where the disagreements are and what the arguments are on both sides," Silverstein said. "There's some real advantage in engaging in a face-to-face exchange."