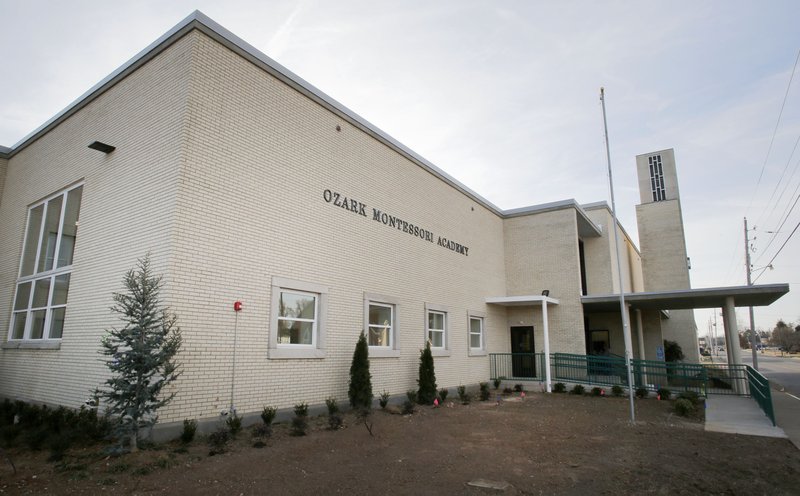 Ozark Montessori Academy in Springdale is seen in this 2016 file photo.

SPRINGDALE -- Ozark Montessori Academy officials said they are focused on improving the academics that earned the charter school a D grade on this year's report card from the state.

"We predict next year will be an amazing year as far as scores are concerned," she said.

This year's report cards from the Arkansas Department of Education reflect information from the 2016-17 school year. Ozark Montessori Academy's test scores lagged the state averages in most categories.

An example was in the third-grade literacy tests. Only three of 14 Ozark Montessori students -- 21 percent -- achieved the level of "ready" or "exceeding," the top two categories. The state average of third-graders achieving ready or exceeding on literacy was 42 percent.

The school for grades kindergarten through eight will begin its fourth year this fall. It was one of 170 in the state -- about 16 percent of all schools -- that received a D on its Arkansas School Performance Report. Another 33 schools received an F.

The Springdale School District has 29 schools, 20 of which received either an A or a B on their report cards this year. Only one -- Springdale High School -- received a D and none received an F.

Arkansas Education Commissioner Johnny Key said the letter grades aren't meant to define a school or a school district, but state officials hope the grades will generate conversations at the school and district levels.

The Montessori Method of education, developed by Dr. Maria Montessori, is a child-centered approach based on scientific observations of children from birth to adulthood. It views the child as naturally eager for knowledge and capable of initiating learning in a supportive, thoughtfully prepared, learning environment. Its approach values the human spirit and the development of the whole child — physical, social, emotional, cognitive, according to the American Montessori Society’s website.

There are no sanctions or penalties for schools based on their grades. Standardized test results, however, are sure to be a part of the discussion when the state's Charter Authorizing Panel weighs Ozark Montessori's future. The school's five-year charter is up for renewal next year.

Ozark Montessori is one of 25 taxpayer-funded, open-enrollment charter schools in Arkansas. It is run by Ozark Education Inc., which also operates a Montessori preschool in Springdale. Open-enrollment charter schools are public and may be run by a governmental entity; an institution of higher learning; or a tax-exempt, nonsectarian organization. They can draw students from across district boundaries.

Ozark Montessori teachers are going through training on intervention methods to use with struggling students, Sawyer said. Students are placed in one of four categories based on their results on the ACT Aspire standardized tests: in need of support, close, ready and exceeding. The school's goal is to move students up at least one of those levels per year, Sawyer said.

Enrollment is on the rise. The school is expecting about 245 students this fall. That would be close to its cap of 280 and about 60 more than the school had this past school year. Another 100 students are on the wait list.

Officials also report being on solid financial ground. Getting teachers trained and setting up classrooms for a Montessori education is expensive. The bulk of those investments have been made, said Barb Padgett, superintendent.

Ozark Montessori Academy has benefited from some generous grants, but, this coming year, it will be able to operate entirely on its funding from the state, Padgett said.

"That's exciting. We love getting grants, but we really want to be able to be self-sustaining," Padgett said.

The school expects to spend $1.7 million during the 2018-19 school year, about $100,000 less than it will receive in revenue, according to Adrianne McGinnis, chief financial officer.

The past year has been a whirlwind for Padgett, who in August abruptly resigned from her position as principal at the Arkansas Arts Academy high school in Rogers. She had held that job for 10 years. Neither she nor the school have commented on her reasons for leaving.

Padgett joined Ozark Montessori Academy in October as interim co-principal. Christine Silano, the school's founding superintendent, resigned in January during a special board meeting to discuss Silano's performance. The board installed Padgett as interim superintendent, then agreed a month later to make the appointment permanent.

Ben Temple, board president, declined to get into the reasons behind Silano's departure, but said the board takes it responsibilities to the students, employees and taxpayers seriously.

"So it's our duty to make sure we have the right leadership in place. Sometimes that means difficult decisions, but we stand by it," he said.

"I think if you look down the road five years, this school will be a model for how other public charters can operate within the Montessori philosophy. I couldn't be anymore excited about the future," he said.

There are several Montessori schools in Arkansas, but only two that are public: Ozark Montessori and another charter school, Rockbridge Montessori School in Little Rock. Both opened in 2015.

The Charter Authorizing Panel voted last month to revoke the charter of the three-year-old Rockbridge Montessori after learning of the school's projected $30,000 year-end budget deficit. The state Board of Education will decide either to accept the panel's decision or hold its own hearing on the matter when it meets June 14.

Montessori is perceived by many as an elitist type of education because most of the schools offering it are private, Padgett said.

"We believe that Montessori education should be in the hands of all children, and they should all have the opportunity. It's a pretty big commitment to make sure kiddos from every walk of life can have this kind of education," she said.

Ozark Montessori's demographics indicate diversity among the students. About 57 percent are considered low-income, 13 percent are English language learners and nearly 40 percent are of a racial or ethnic minority, according to Arkansas Department of Education data.

"We've probably seen 10 new public Montessori schools a year each of the last five years," Ayer said. "And because the public schools tend to be bigger than your typical private school, that tends to mean thousands of additional children coming into Montessori."

Other public Montessori schools nationwide struggle with state testing demands as well, Ayer said. Another big challenge is finding teachers who not only are trained in the Montessori method, but also have the credentials required to be a public school teacher in their state, he said.

Katy and Ted Morter enrolled their son, Max, at Ozark Montessori last year for his kindergarten year. Max, 6, had spent three years at the private Walnut Farm Montessori School in Bentonville. The chance to enroll in a Montessori school that didn't charge tuition was a big draw for the Morters.

The school has exceeded their expectations, Katy Morter said. Max "came home happy all the time," she said. His reading ability improved drastically over the course of the year, he's counting to 1,000 and he's picked up an interest in geography.

The family moved from Bentonville to Springdale in part to be closer to the school. Morter called the school "a gem." She added she believes it will continue to get stronger.

As for the midyear change in leadership, she said, "I think there was a bit of a rough patch, but it smoothed itself out. For us, it wasn't that big of a deal."