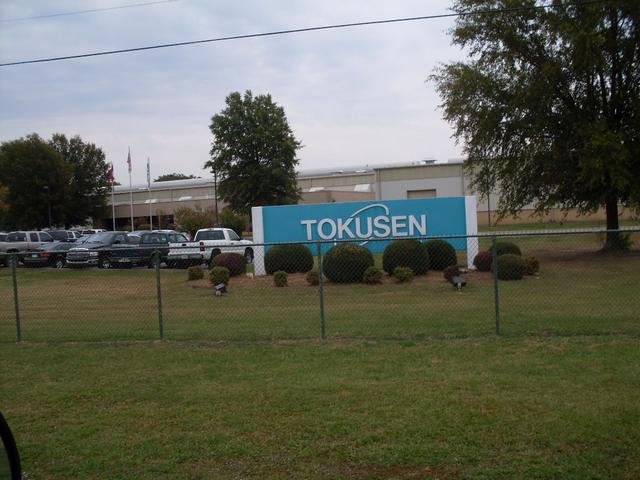 The Tokusen USA plant is shown in this photo from the Faulkner County assessor's office. Tokusen is one of three manufacturers in Arkansas that have gotten push-back in their efforts to win exclusion from the U.S.' tariffs on imported steel.

Three tire-cord manufacturing companies with operations in Arkansas have gotten push-back in their efforts to win exclusion from the U.S.' tariffs on imported steel.

Bekaert Corp., Kiswire America and Tokusen USA jointly requested blanket exclusion from what they described as "grade 1078 and above wire rod for tire cord" that they import, arguing that the quality of wire rod they require is unavailable from U.S.-based steel producers.

President Donald Trump's administration last week imposed tariffs of 25 percent on steel and 10 percent on aluminum from the European Union, Canada and Mexico, which together supply nearly half of the United States' imported metal and are counted among the United States' closest allies. The tariffs also target China, long accused of oversupplying the global steel market.

If they can't get access to the imported steel they need, the companies say they will close their operations. Together, they employ 1,500 people at four plants in Arkansas.

"Stated simply, U.S. wire rod producers are incapable of producing grade 1078 and above wire rod to produce tire cord because that grade of wire rod must be produced in basic oxygen furnaces to achieve the strength, cleanliness and other properties to draw the wire rod to tire cord dimensions," according to the companies' legal representative, the Washington, D.C., law firm of Morris, Manning & Martin LLP.

But the Wire Rod Coalition, a trade organization of U.S. producers of carbon and alloy steel wire rod, disagrees and has filed an objection to the request for a blanket exclusion.

Coalition members say they can and do make the same quality steel tire cord without using the basic oxygen, or blast, furnaces that Bekaert, Kiswire and Tokusen say their steel requires. "Grade 1078 and above tire cord wire rod can be and is produced using electric arc furnace steel," the coalition's legal counsel, Kelley Drye & Warren, said in a formal objection.

The fight over the exclusion request is being waged within the Bureau of Industry and Security, an agency of the U.S. Department of Commerce that describes itself as "a licensing, regulatory and enforcement agency that advances U.S. national security, foreign policy and economic objectives."

The request for the blanket exclusion is just one of hundreds that have been filed with the Bureau of Industry and Security since March 18, when the Commerce Department published the procedures on how it will process the exclusion requests.

The agency said Commerce Secretary Wilbur Ross, in consultation with other members of the administration, will evaluate the requests. The evaluation will include national security considerations.

"In that evaluation, the secretary will consider whether a product is produced in the United States of a satisfactory quality or in a sufficient and reasonably available amount," the department said. "A single response to each exclusion request will be posted on regulations.gov."

People or organizations opposing the exclusion requests can file objections during a 30-day comment period.

Only individuals or organizations using steel or aluminum articles identified in Presidential Proclamations 9704 and 9705 and engaged in business activities in the United States may submit exclusion requests. Exclusion requests will be posted for the 30-day comment period on regulations.gov.

The exclusion request by Bekaert, Kiswire and Tokusen was dated March 29, but it wasn't recorded on regulations.gov until April 20. The objection was dated May 20 and was recorded two days later.

Bekaert, which is a Belgian company, operates five plants in North America. Its two largest plants are in Rogers and Van Buren, which together employ nearly 900 people, according to the exclusion request.

As a result of the investigation that led to the tariffs, Bekaert has put on hold a $29 million expansion at its Rogers plant that would have increased tire cord production by 50 percent and added more than 100 jobs.

Kiswire LTD, which is based in South Korea, has a plant in Pine Bluff, one of its two operations in the United States. The Pine Bluff facility employs 320 people and has a capacity to produce about 38,000 tons of wire cord annually.

Tokusen USA, which is a subsidiary of a Japanese company, has a plant in Conway. It employs 330 people and has a capacity of 40,000 metric tons.

The issue the companies have with the tariffs is that they will be subject to them while their foreign competitors -- which produce tire cord outside the United States -- won't.

"Good, high-paying U.S. jobs in the tire cord industry will be eliminated while all of this production will be transferred to overseas manufacturers," according to the exclusion request.

"U.S. tire manufacturers will become more dependent on imports of tire cord for manufacturing tires, including those used in national defense applications, such as tires for military aircraft," the request said.

As a result, the administration's actions will undermine the president's objectives in imposing the tariffs, the three manufacturers said.

"U.S. jobs will be lost, not created; foreign suppliers will gain a competitive advantage in supplying the U.S. tire market; and the production of important national defense products will become more dependent on imports," they said.

But the coalition opposing the request said granting the exclusion would have the "effect of threatening the recovery of domestic producers of steel wire rod."

Members of the coalition include Keystone Consolidated Industries Inc. of Peoria, Ill.; Charter Steel of Saukville, Wis., and Fostoria, Ohio; and Optimus Steel of Vidor, Texas.

According to data collected by the International Trade Commission, domestic wire rod production had fallen to about 3.9 million tons in 2016, a 3 percent decline from 2014. The domestic industry's capacity utilization rate was less than 77 percent. In that period, the industry production workforce declined 3.3 percent. The hours and wages of remaining workers also declined.

The coalition argues that its wire cord quality meets the standards Bekaert, Kiswire and Tokusen say the domestic industry lacks. The domestic industry says it accomplishes that by controlling scrap inputs, purchasing products made in blast oxygen furnaces and using direct-reduced iron in its production process.

"On the contrary, Wire Rod Coalition members are capable of producing grade 1078 and above tire cord wire rod if market conditions would support greater investment in and commitment of resources to this specialized product," the coalition said in its objection.