Another GOP peer presses senator from Little Rock to quit 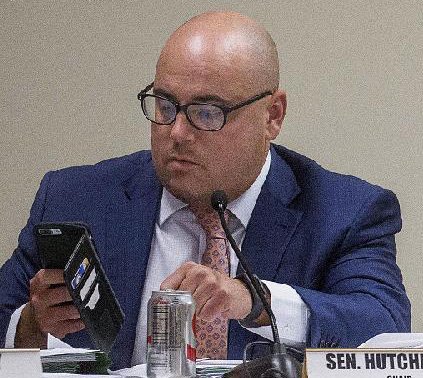 State Sen. Linda Collins-Smith, a Republican from Pocahontas, on Tuesday called on state Sen. Jeremy Hutchinson to resign immediately, saying that his staying in the Senate is a disservice to his constituents and the people of Arkansas.

And for the second consecutive day, Hutchinson's attorney, Tim Dudley, said Tuesday that his client won't resign, because public officials should not quit over unfounded and unproven allegations.

Dudley has acknowledged that his client was "Senator A," an unidentified lawmaker in a lobbyist's guilty plea document released last week in a federal case. That document claims "Senator A," who has not been charged, and other lawmakers accepted bribes.

Collins-Smith became the second member of the eight-member Senate Judiciary Committee to recommend in a written statement that Hutchinson, a Republican from Little Rock who heads that committee, depart the legislative body.

Also Tuesday, state Senate leaders announced that they would hold a news conference at 11 a.m. Thursday at the state Capitol to unveil a draft of proposed ethics rules for that chamber.

Sen. Jim Hendren, a Republican from Sulphur Springs who is line to be Senate president pro tempore from 2019-21, said the proposed rule changes would increase reporting requirements for senators and impose prohibitions regarding conflicts of interest. Hendren and Hutchinson are cousins, and both are nephews of Gov. Asa Hutchinson.

Hendren said the rule changes are being proposed because there has been a string of incidents involving various lawmakers in Arkansas over many years.

"I am determined to change the culture" as the Senate's future leader because "Arkansas deserves better," he said.

"We are going to do what we can all agree upon, what we know will, I hope, stop the worst part of it immediately, but we're also going to put in place a committee that begins to study this and have authority to deal with this and over the next four or five months, I think you'll see a process where a lot more changes are made," Hendren said.

"There's going to be some rules changes with regard to attorneys and conflicts of interest and disclosure when you represent something that is before the Legislature for somebody," Hendren said. "There is going to be some disclosure requirements about people who do business with the state, whether it be through Medicaid or anything else."

Senate leaders said the proposed rules changes will be considered during a business meeting scheduled for 1 p.m. Tuesday when two newly elected senators, Breanne Davis of Russellville and Ricky Hill of Cabot, take their oaths of office in the Senate chamber. Both are Republicans who are filling vacated seats.

In her news release, Collins-Smith said she wants Sen. Hutchinson to resign because the "recent documentation of his conduct, revealed in the Information filed in the District Court for the Western District of Missouri, in taking bribes in his official capacity as a Senator, makes him unfit to continue to serve."

"Senator Hutchinson should immediately resign this office," she said.

Hutchinson, an attorney, has served in the Senate since 2011 and was in the House previously. His four-year term will end in mid-January because he isn't seeking re-election. He represents Senate District 33, which includes parts of Pulaski and Saline counties.

Dudley said Tuesday that Collins-Smith is "another longtime political opponent of Sen. Hutchinson," adding that his client denies that he accepted any bribe or is otherwise guilty of any allegations made by lobbyist Rusty Cranford.

"Mr. Cranford is a convicted felon who, according to the government, attempted to murder someone and is merely trying to get his sentence reduced," Dudley wrote in a text message.

Cranford pleaded guilty in federal court Thursday to one count of federal program bribery for his role in bribing Arkansas lawmakers from 2010-17.

In his plea statement, Cranford said "Senator A" accepted payoffs, along with former state lawmakers Hank Wilkins, a Democrat from Pine Bluff, and Jon Woods, a Republican from Springdale. Hutchinson was an attorney under contract with Preferred Family Healthcare, Cranford's client and employer, until last year, the company has said.

The plea documents describe $500,000 in payoffs made to "Senator A," through bribes, fees and gifts that included tickets to the 2013 World Series. He was paid $7,500 a month as an attorney by Preferred Family Healthcare beginning in 2013, and that amount was raised to $9,000 a month in 2014, according to the plea.

Preferred Family Healthcare, based in Springfield, Mo., is a behavorial health care provider with 47 locations in Arkansas. It also has operations in Missouri, Oklahoma, Kansas and Illinois.

Dudley said Tuesday that Cranford's allegations are not credible and are not true.

"The allegations of bribery are on their face ridiculous. If accusations were sufficient to call for resignation, then I expect Sen. Collins-Smith and Sen. Rice to call on President [Donald] Trump to resign because President Trump has endured more accusations than anyone in American political history," Dudley said. "Sen. Hutchinson is presumed innocent and is in fact innocent."

In a telephone interview, Collins-Smith said Dudley is "distracting from the issue at hand. This is very serious. This is our issue at home."

Collins-Smith said her call for Sen. Hutchinson's resignation had nothing to do with Gov. Hutchinson's support for Rep. James Sturch, R-Batesville, who defeated her in the May 22 Republican primary election.

Rice said Dudley's remarks about him, Collins-Smith and Trump are the attorney's prerogative.

"I stand by my statement," Rice said.

As for whether Sen. Hutchinson should resign, Senate Democratic leader Keith Ingram of West Memphis said Tuesday that "No. 1, that's up to Jeremy."

"He hasn't even been charged. ... Even a Republican ought to have due process," said Ingram.

Senate Republican leader Bart Hester of Cave Springs said the Senate Republican caucus adopted a policy last year to strip a senator who is indicted of his leadership duties, so "we don't make emotional decisions when these times come." He said he intends to follow that process.

"We live in a country where you are innocent until proven guilty," Hester said.

House Democratic leader David Whitaker of Fayetteville said: "The truth is, until he is indicted, we don't know anything. I am not going to waste my time calling for his resignation." Whitaker said he trusts Hutchinson to do "the right thing" at "the right time" if the circumstances warrant that.

"It is surely much noise to call for that at this point," Whitaker said.

House Republican leader Marcus Richmond of Gravelly said Sen. Hutchinson's position is "an issue on the Senate end for those guys down there to make a determination of how they are going to handle it."

"I would not want the Senate down there trying to weigh in on something going on in the House end," he said.

But Richmond added that the perception of the Legislature "right now is awful. It is going to take a lot of work overall on our part to restore that trust." 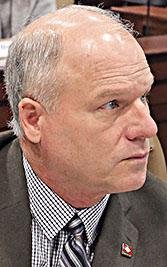 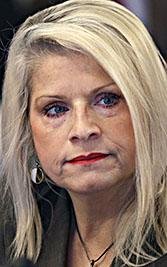 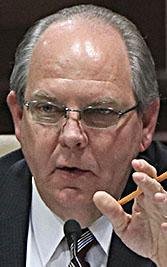 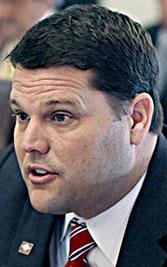 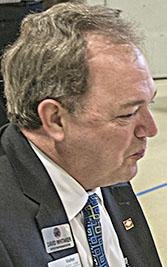 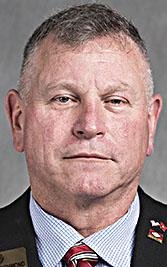