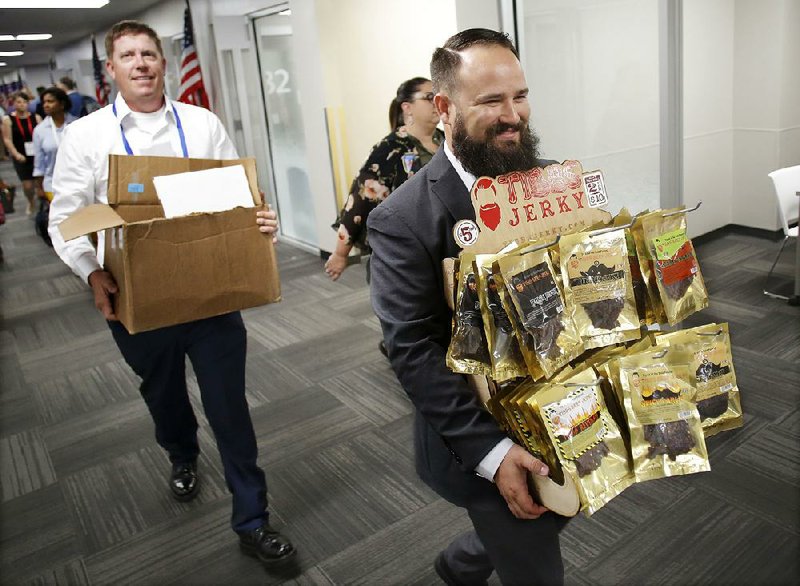 Steven Tibbs (front), owner of Tibbs Jerky, carries a display of his products down Vendor Hall at Walmart’s Made in America open-call event in Bentonville on Wednesday. Behind him is Ben Ebenhoe, Tibbs Jerky’s sales executive and chief financial officer.

BENTONVILLE -- Hundreds of U.S. suppliers on Wednesday gathered in Northwest Arkansas to pitch their products to Walmart buyers, hoping to snag a deal with the retail giant.

Products included foods, like a hummus that requires no refrigeration, creole spices, and cloth diapers.

The company's open-call event is part of Walmart's commitment to invest $250 billion in American-made products by 2023. Marsiglio said the company has met 90 percent of its goal so far. This is the fifth year Walmart has invited suppliers to Bentonville for the day-long event.

Tony Rogers, Walmart's chief marketing officer, said most people agree that buying American-made products is important. During a morning session, Rogers said customers believe this because they want to "support American families" and "invest in a brighter future."

"We want you to have a contract with Walmart," Hutchinson said. "We want you to go back to your state and grow so much that you'll need a central location here in Arkansas."

More than 750 merchants meetings took place at Walmart's headquarters in Bentonville. There, suppliers pitched ideas suitable for the retailer's home and office, toys, food and hardware departments, among others. Marsiglio said product innovations in the electronics and apparel categories are "more difficult" to find.

Suppliers came from 46 states, Puerto Rico and the District of Columbia. Almost 25 percent of the companies presenting were run by women.

Beatrice Feliu-Espada, founder of Atlanta-based The Honey Pot, a maker of plant-based feminine care products, said she tested them for years before developing a line of herbal-infused products currently sold by Target, Whole Foods and Amazon, among others. The push to work with Walmart came from Feliu-Espada's investors, who recommended the company gain more exposure.

"Getting a yes is the easy part, finding the capital is hard," Feliu-Espada said.

After the company's nearly 45-minute meeting, Kelly Bottenfield, vice president of sales for Honey Pot, said they received a ticket for their wipes and washes to roll into U.S. stores soon. Bottenfield said the company is scheduled to work out its deal with Walmart in July and begin a test-run of its scented feminine products in a few stores.

The roots of Jennifer Labit's company, a maker of cloth diapers, came out of necessity. At one time, Labit said she could barely afford disposable diapers, and as a solution, her friend recommended cloth alternatives. She soon ran with the idea and developed what would become Elemental Joy cloth diaper products.

They are sold online and by some retailers. She said her products were once sold at Babies R Us.

Holding a blue and gold ticket, Labit said she made a deal with Walmart to sell cloth diaper products in more than 100 U.S. stores.

Roger Plant, marketing manager of Oregon-based Truitt Foods, came out of his meeting with a ticket and a commitment to produce a hummus that requires no refrigeration to be sold at 1,800 Walmart stores. The company's line of bean dips are found mainly along the West Coast. Plant estimated this deal could mean 15 new jobs or an additional production shift for Truitt.

While Wednesday's events were promoted for domestic suppliers, Walmart was open to making deals with current suppliers wanting to expand operations into the U.S. One supplier made the case that its cookies, sold currently in Walmart stores throughout Puerto Rico, should be sold in the United States as well. After that meeting, Marsiglio said the supplier snagged an expansion deal to enter stores in the South Florida market.

Some Arkansas businesses also charmed their way into a deal with Walmart.

A Van Buren-based company, Pro Gasket Solutions, has developed a rubber-like seal that customers can place along the door of their garage, house or shed to keep water from spilling in -- or out of they like. After the pitch, a buyer agreed to make the product available on Walmart's website.

Old Hickory LLC, a sauce maker from El Dorado, snagged a direct-store-delivery deal with Walmart for its variety of Worcestershire sauces.

In such a competitive shelf-space, Taylor Tarlton, Old Hickory's vice president of operations, said the retailer wanted to see how the sauces would do in a "good majority of Arkansas stores."