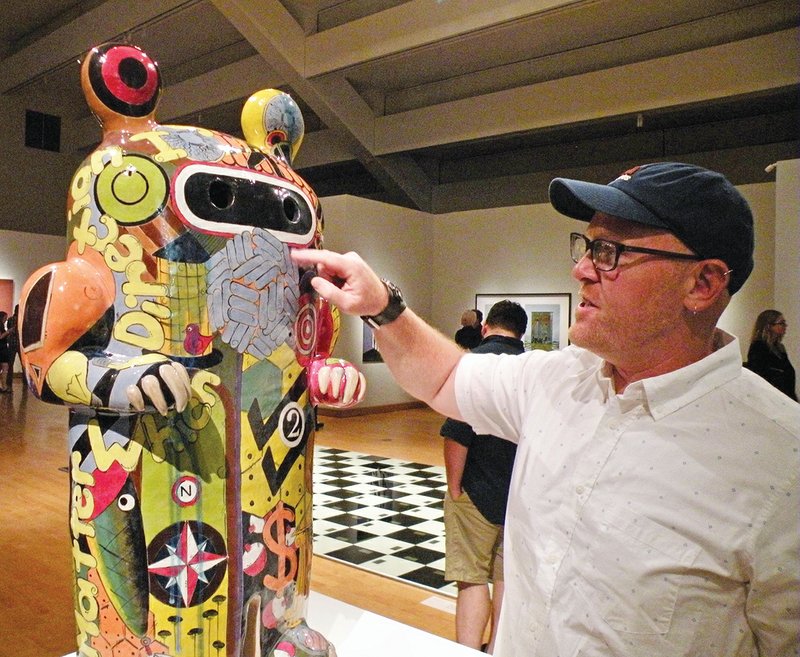 Aaron Calvert points out the blue patterned circle representing the Zika virus that he drew on his ceramic form titled Always Going South Bear. During the opening reception of the 60th Annual Delta Exhibition at the Arkansas Arts Center, he told visitors he drew images and symbols on the ceramic form to represent “the important and mundane in my life.”

LITTLE ROCK — Works by two artists from the Tri-Lakes Edition coverage area are featured in the 60th Annual Delta Exhibition now on display at the Arkansas Arts Center in Little Rock. Both artists — Aaron Calvert of Arkadelphia and Warren Criswell of Benton — have had their art selected for previous Delta exhibits, and both have won previous awards as well.

This year, Calvert received an honorable-mention award with his glazed stoneware sculpture Always Facing South Bear. His work was noted in the 2015 Delta Exhibition as well, also with an honorable mention.

“Having a piece selected for the annual Delta Exhibition has always been an honor because the competition is strong with a large number of entries,” said Calvert, who is an associate professor of art at Henderson State University in Arkadelphia. “In 2015, I had received an honorable mention but was late to the opening because of jury duty in Arkadelphia. I remember my friends telling me I had won an award. This year was completely different in that I was present and sitting with my wife and friends when all the awards were announced. I was completely shocked and felt a sense of joy to receive an award in front of my peers.

“Events such as the Delta Exhibition bring artists out of their studios and showcase the creative energy of this region.”

Calvert said the images and symbols he draws on his ceramic forms “represent the important and the mundane in my life.”

He said they “largely stem from personal events, news, my interest in nature and symbols/patterns from various cultures. In a general sense, the work is self-narrative with emphasis placed on the collective of images versus an individual.

“A component of this work is viewer discovery,” he said. “I like that the viewers must circle the piece to see all the images and that they bring their own experiences along during the discovery. Sometimes the images are recognizable, like bacon in a frying pan, but it’s not really about that. It’s about the viewer’s association with that image.”

He explained some of the images to visitors at the opening reception. The Zika virus and the school shootings are two things he references on the form.

“These are rather darker topics, but I come at them from a point of interest and concern,” he said.

“The Zika virus is the blue patterned circle where the mouth of the bear would be. When this virus hit the United States, it was all over the news, and I began researching what it looked like. I wanted to visualize this medical threat,” Calvert said.

“As a father of two and an educator, school shootings and the recent law allowing conceal-carry on campuses weigh heavy on my mind. If the apple was an accepted symbol for education, then incorporating a bull’s-eye within the apple seemed to convey my feelings,” he said.

“The drawing on the surface of these forms is rather labor intensive, but it gives me time to think,” Calvert said. “While working on another piece, I was thinking that no matter which direction I stand, I was always facing south. I wrote that in my sketchbook and liked that south not only represents a compass direction but also a culture.

“Originally from Ohio, it has taken me years to decipher and appreciate some of the nuances of the South. I truly appreciate my time in Arkansas and the impact it has on my art.”

Although Criswell did not receive an award this year, he said it is “an honor” to be selected for the exhibit with his oil-on-canvas painting Eat Now (Again).

“I’ve been in 11 Deltas, 12 if you include the retrospective in 2008, and have won several Delta awards and purchase awards,” Criswell said, “but I’ve probably been rejected more times than that. I don’t see art as a competition, and the Delta is the only one I enter anymore. Yes, it’s an honor to be selected.”

Criswell said he did the original Eat Now painting in 1991.

“I discovered an old slide of the first one, an oil on paper, and have no idea what I was thinking at the time, so this was like a totally new discovery for me,” Criswell said, laughing. “There were many things I had missed in the first one. … It has a different meaning for me now than back in the day. Maybe I’m becoming the Ouroboros, swallowing my own tail.”

Criswell was born in West Palm Beach, Florida, in 1936 and has lived in Arkansas since 1978. Primarily a self-taught painter, he is also a printmaker, sculptor and animator. He has had 41 solo exhibitions in the United States and one in Taiwan. His work has been included in 76 group exhibitions throughout the country and abroad.

The Delta Exhibition showcases a variety of works by artists living or working in Arkansas and its neighboring states. A panel of three jurors selected a total of 52 works by 46 artists for this year’s exhibit, which will remain on display through Aug. 26.

For more information on the Delta Exhibition, visit the website arkansasartscenter.org or call (501) 372-4000.

The Arkansas Arts Center is at Ninth and Commerce streets in Little Rock. There is no admission charge. Gallery hours are from 10 a.m. to 5 p.m. Tuesday through Saturday and from 11 a.m. to 5 p.m. Sundays. The center is closed Mondays and major holidays.