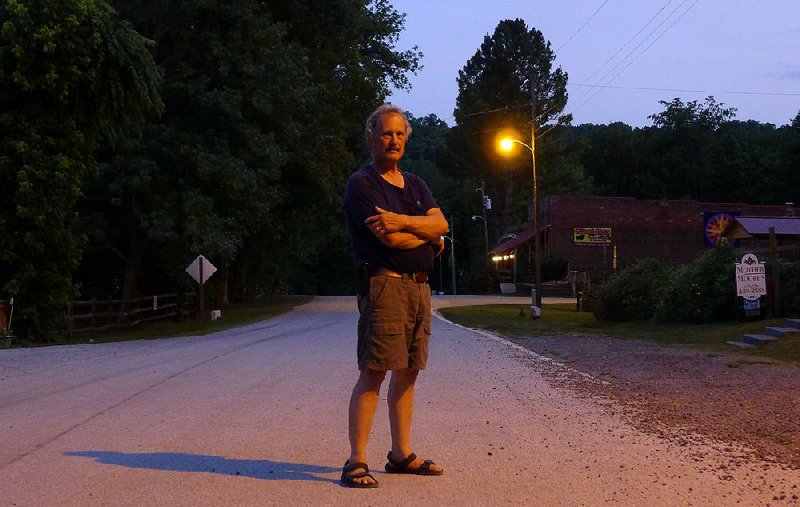 "It comes right into my bedroom at night," said Mayor Mitch Mortvedt. "It can definitely be a problem. Years ago, we didn't even have streetlights in town. I remember the night sky, and it was black."

A very bright light is right across Church Street from the mayor's house.

Most of Gilbert's streetlights are the high-pressure sodium variety with a glass globe covering that allows light to go in all directions. Bruce McMath calls them "barnyard lights."

"They don't put the light down where it needs to go," said McMath, chairman of the Arkansas chapter of the International Dark Sky Association.

McMath has been advising Gilbert on its lighting concerns.

For a year and a half, McMath has been working with the Buffalo National River to make it the first Dark Sky Park in Arkansas. About 100 parks have that designation across the country.

"This has implications for tourism down the road because these dark places become so scarce so fast," said McMath, whose father was Arkansas Gov. Sid McMath. "People are literally traveling to go see a naturally dark sky."

Qualifying for the designation requires replacing about 240 light bulbs with low-wattage amber LED lights whenever possible and covering another 85 existing bulbs with amber-colored sleeves, said Cassandra Johannsen, a park ranger at the Buffalo National River who has been working with McMath on the initiative.

"Our naturally dark sky is a fragile natural resource and one that the park hopes visitors appreciate and find great value in," Johannsen said. "It is wonderful that people fought to protect Buffalo River as a free-flowing river. Now we need people to fight for the unpolluted night skies over the river."

Careless outdoor-lighting is altering the diurnal cycle of night and day in cities, towns and even countryside, with implications for human health, according to darkskyarkansas.com.

"The natural cycle of light and darkness cues critical hormonal responses in humans, animals and plants," according to the website. "The American Medical Association has issued two public health statements implicating exposure to light at night in sleep problems, diabetes, obesity, depression, as well as breast and prostate cancer, all epidemics of modernity. ..."

LED fixtures, with high blue light content, threaten to compound the problem if not used with care, according to the article.

Johannsen said light pollution could be a culprit in dwindling firefly populations.

"Scientists think that when fireflies are unable to signal one another that their mating ability is compromised, leading to fewer fireflies," she said.

"We thought we'd start with Gilbert and get them on board," Johannsen said. "We want to partner with local entities."

To help with the dark sky effort, Mortvedt asked Entergy if Gilbert could switch to more energy-efficient light-emitting diodes that focus the light on the streets instead of the trees.

"The hooded streetlights, I think, would be a great thing to do," said the mayor.

But changing to LEDs would cost the city more than twice as much as it's paying for its old lights, Mortvedt said.

"What we're trying to figure out is if you have a fixture that uses less electricity, why isn't it a more reasonable price?" he said.

Last year, Gilbert paid an average of $4.70 per streetlight per month, Mortvedt said. He said the cheapest base rate LED light would cost the city $12.87 per light per month.

Kerri Jackson Case, a spokesman for Entergy Arkansas Inc., said LED lights use less electricity but there is more than that included in the tariff. The fixtures cost about three times as much and maintenance costs are about the same, even though LED bulbs are designed to last longer, she said.

"The tariff for LEDs is more than a typical streetlight, which uses a high-pressure sodium bulb," she said. "Many cities, including Gilbert, have their contracts for streetlights structured such that Entergy installs, owns and maintains the lights for a set monthly fee from the municipality."

McMath questions whether Entergy wants to cut energy use at night.

"There are several reasons why Entergy's tariffs are higher for LED than heirloom fixtures," McMath said. "One of them is that Entergy does not fully account for the potential energy savings. The fixtures they offer are rated as 'equivalent' based upon the lumen rating. This fails to take into account the greater visual efficiency of LED's white light."

Mortvedt wrote to the Arkansas Public Service Commission on April 1 asking that Entergy provide more affordable LED options. He has yet to hear back.

Diana Brenske, acting interim executive director of the commission, said the commission has been working with Entergy to investigate lighting options.

Bill Henry, the traffic engineer manager for Little Rock, said Arkansas' largest city also has decided LED lights are not cost effective, at least for now, because of the "high tariff rates charged by Entergy."

"The tariff rate is so much higher for LED than high-pressure sodium, it doesn't make sense to go that way," he said.

Henry said the biggest expense is the LED fixtures, which can cost $300 each. High-pressure sodium light fixtures cost less than $100 each, he said.

Henry said there are about 33,000 streetlights in Little Rock, and Entergy owns 30,000 of them. The city owns and is responsible for the lights on the interstate system in Little Rock, he said. LED bulbs last longer, so that reduces the maintenance costs of replacing them, he said.

Little Rock is working to replace its city-owned streetlights with LEDs because of the reduced maintenance costs and lower energy costs, Henry said. Typically, an LED light will use less than half as much electrical power as equivalent high-pressure sodium lighting fixtures, he said.

"We have already installed more than 200 LED fixtures and are moving forward with a project to install another 350 fixtures this year," Henry said. "I'm sure as time goes on, things will end up getting changed out to LEDs as they become more cost-effective. Everything is going LED. All the city buildings have been changed over to LED lighting because of the energy savings. All of the traffic signals are LED. I figure it's just a matter of time before everything goes LED."

Mortvedt's grandmother, Ethel Myers, was mayor when Gilbert first got streetlights in the 1970s. There was opposition to street lighting in Gilbert even then.

One couple didn't want the lights because they liked to walk around town in the nude, Mortvedt said.

"They said this was going to illuminate things."