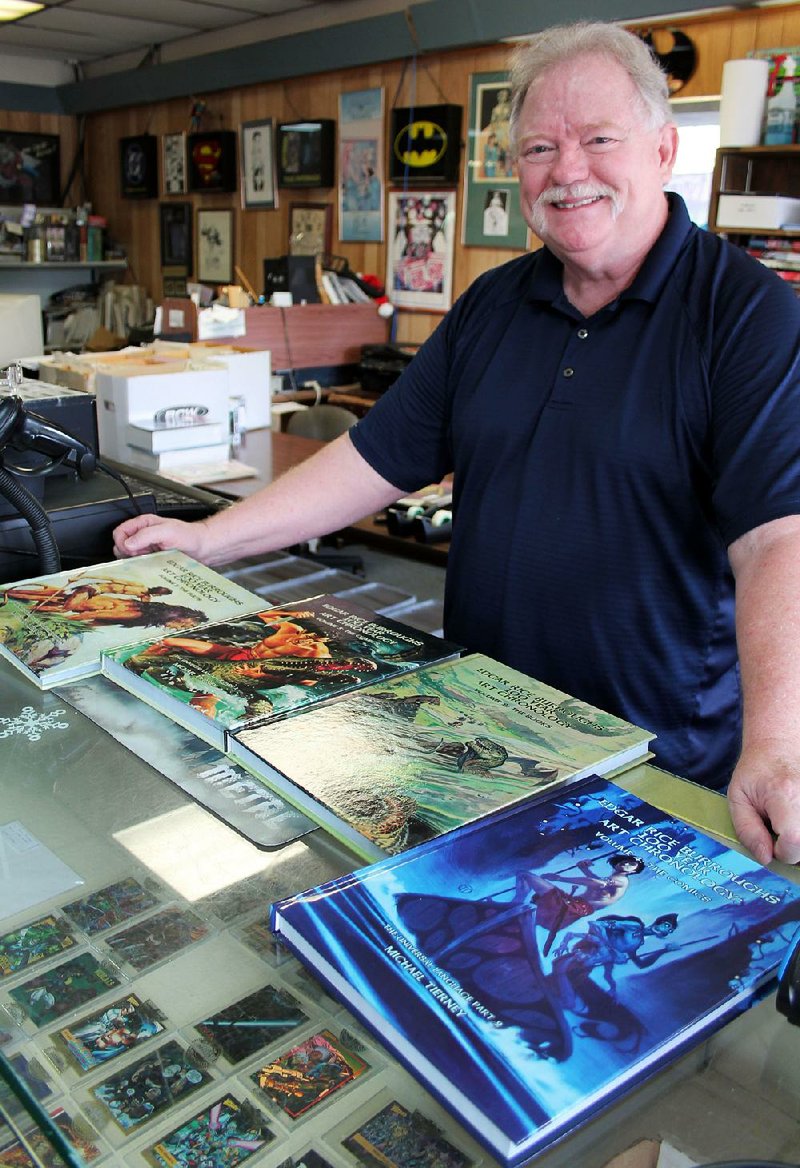 When he was 8 years old, Michael Tierney was diagnosed with what was thought to be terminal leukemia.

"I was in the hospital for like a year," says Tierney, now 62. "When I got out, I read everything I could get my hands on."

Among the titles he devoured at the public library in his hometown of Pittsburg, Kan., was Edgar Rice Burroughs' Tarzan novels. The tales of the British castaway orphan raised by a tribe of Mangani apes on the western coast of Africa captivated the young Tierney and, like any budding completist, he yearned for more information on the books and their author.

Being a library regular, he was given access to the complete Books in Print: An Index to the Publishers Trade List Annuals, which listed all book publications. On vacations, he and his parents stopped at every bookstore they could find, and Tierney would consult the list he made from the Index in search of Tarzan ephemera.

Now, after a lifetime of hunting, trading and collecting, Tierney has compiled the Edgar Rice Burroughs 100 Year Art Chronology, a 1,200-page, 140,000-word, four-volume, hardback set with more than 5,000 images picked mostly from his own collection and weighing in at a bookshelf-straining 15 pounds. The books also contain Tierney's well-researched entries about the different eras, artists and history behind the art.

"These are the books I was looking for when I was a kid," the ever-enthusiastic Tierney says from behind the counter of Collector's Edition Comics, the North Little Rock comic book store that he opened in 1982 on John F. Kennedy Boulevard in what was once Arkansas' first McDonald's restaurant. In 1989, he expanded his comics kingdom to include The Comic Book Store on Treasure Hill Road in Little Rock.

Published by Little Rock's Chenault & Gray and with the full approval of Edgar Rice Burroughs Inc., the four books, sold as a single set for $250, include volumes focusing on images from Burroughs' publications in pulp magazines, novels and comics.

The Chicago-born Burroughs, who died in 1950 at age 74, introduced his most recognizable protagonist in the 1912 novel Tarzan of the Apes. The story was published in the pulp magazine The All-Story. The cover artwork by Clinton Pettee from that edition, showing Tarzan, knife in hand, fighting with an angry lion, is featured in Volume One of the Chronology, which is subtitled The Pulps, Dawn of the Age of Science Fiction.

Jim Sullos is president of Edgar Rice Burroughs Inc., which is based in -- where else? -- Tarzana, Calif.

"Edgar Rice Burroughs and the Tarzan franchise goes back 100 years, and it's pretty dramatic when you think about all of the artwork that was collected in that time," he says. "The concept of doing a 100-year art chronology made a lot of sense when you start thinking of all the possibilities, and Michael had such a good handle on it. I didn't realize what an expert he was."

Chenault & Gray owner Stephen Chenault says the size of the Chronology was daunting at first.

"When he told me it was going to be 1,200 pages, over 5,000 images, at a certain point your brain doesn't really register what he's pitching."

But Chenault is a Burroughs fan, and knowing his longtime pal Tierney was an expert, he was quickly on board: "I'm a fan, but Mike knows that area like no one else I've ever met. It looked like a really exciting project."

It was Burroughs' storytelling that initially attracted the young Tierney, but the illustrations that kept his interest.

"Back then, the old books at the library didn't have dust wrappers," he says. "I always wondered what those covers looked like. One of the high points was whenever I would get to an illustration in the story. The art really kept me going. After awhile, I started getting all the different editions of the books because they had different art."

It's easy to see why. From the pulps, to covers of novels to comic book art, Tarzan's potential as a subject for the visual artists who depicted him was unbounded. There he is tangling with a giant snake, fighting lions, gorillas and bad guys alike, and swinging through the jungle no doubt on his way to do something heroic.

And no telling how many people grabbed a Ballentine Books Tarzan paperback in the late 1970s solely on the strength of the dramatic, action-packed covers by Neal Adams and Boris Vallejo. Ballentine got it right, Tierney says in his entry on the series.

Sullos believes that art lovers will appreciate the collection.

"I think the art community needs to know about this, not just the Tarzan community," he says. "They need to discover this because it's so unique in covering 100 years of this art. It's remarkable."

The books, which were part of Kickstarter fundraising project that began a year ago, made more than $120,000 in advance sales, says Chenault, and are available at Chenault & Gray's site, trolllord.com as well as amazon.com, bookstores and, of course, Tierney's comic book shops.

Burroughs wrote 24 Tarzan novels altogether, and the character became one of the first serialized in comic strips, appeared in an early version of the graphic novel and later showed up comic books and films.

Tierney wasn't much into the films.

"I grew to like them, but you have to accept them as a completely different version of Tarzan," he says. "The Tarzan of the novels was intelligent. He spoke multiple languages. There was none of this monosyllabic 'Me Tarzan, you Jane.'"

Burroughs, who Ray Bradbury called "the most influential writer, bar none, of our century," wrote more than just Tarzan stories. His iconic science fiction character John Carter, who fought four-armed beasts on Mars, is well represented in the Chronology.

Tierney, ever the completist, includes plenty of stunning art from non-Tarzan Burroughs titles like Land of Terror, The Land That Time Forgot, The Gods of Mars, Pirates of Venus, The Warlord of Mars, Westerns like The Bandit of Hell's Bend, Return of the Mucker and many others.

After Volumes One and Two -- which cover the pulps and novels -- The Chronology devotes two volumes to comics.

"Tarzan was there at the dawn of the art form," Tierney says. The character first showed up in 1929 as a serialized newspaper strip illustrated by Hal Foster. The jungle man's first comic book appearance was in Tip Top Comics #1, which hit newsstands and stores in 1936.

With his hefty collection now secure between hardback covers, is Tierney, who publishes his own comics title, Wild Stars, done with Burroughs for a while?

"I'm adapting one of Burroughs' novels, Beyond the Farthest Star, with local artist John Lucas for an online strip," he says.