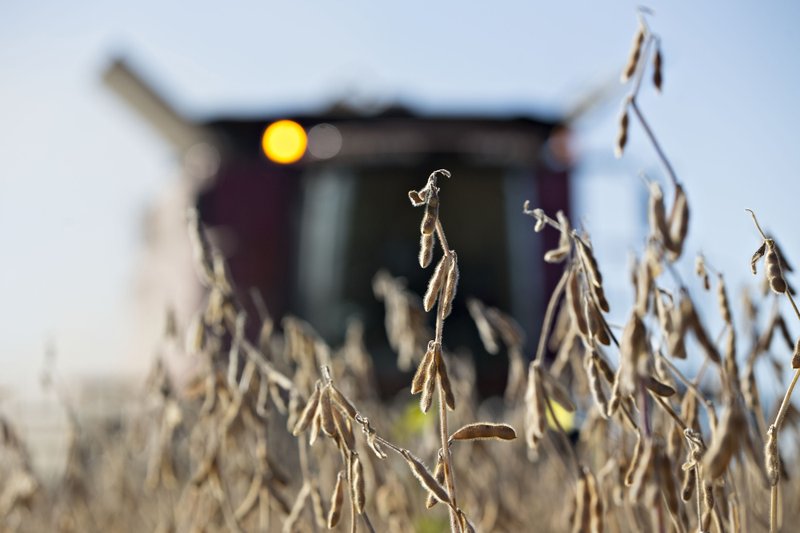 Soybeans are harvested with a combine harvester in Princeton, Illinois.

"Soybean prices are down 35 cents today, right at $9 [a bushel] even," Randy Veach, president of the Arkansas Farm Bureau, said early Tuesday of the most-immediate effects of the president's threat and China's promise to retaliate.

"We're getting to a point now that it's going to be very difficult for a farmer to make a profit, with prices down, inputs [expenses] up and an increase in prices for everything else," Veach, a farmer in Mississippi County, said. "Now we have tariff wars at a time prices are very fragile."

Arkansas farmers harvested 3.5 million acres of soybeans last year, collecting 178.5 million bushels, according to the statistics service of the U.S. Department of Agriculture. At $9.75 a bushel, the crop had a market value of $1.74 billion, placing the state 11th among soybean-producing states. About 40 percent of Arkansas soybeans are exported, with most going to China.

Soybean futures slumped to $8.41 per bushel at one point Tuesday, the lowest price since March 2009, but rebounded to $8.89 at closing.

Early this spring, when talk of tariffs was only that, economists with the University of Arkansas System's Agriculture Division said China's threatened 25 percent tariff on soybeans and seed oils would cost the state $243.6 million. The same tariffs on grains, such as rice and corn, and on cotton would cost the state $191 million and $51.7 million, respectively.

[FULL LIST: Chinese products that will be subject to additional tariffs + more products under review]

Soybeans are the state's largest row crop. At 1.1 million acres, Arkansas produces about half of the nation's rice.

Besides China, the European Union, Mexico and Canada also have placed tariffs on American goods, including agriculture commodities, as a way to discourage those purchases.

Veach said the dispute between China and the United States also threatens hard-won efforts to open the Chinese market to Arkansas rice and beef.

U.S. and Chinese officials last year announced an agreement on the first-ever shipments of U.S. rice to China, contingent on an inspection program that was to begin this year. Also last year, Trump and Chinese President Xi Jinping negotiated to reopen China's beef market to the U.S. for the first time in 14 years.

"Those were things we were really looking forward to," Veach said, "and it's come to a crashing halt. Forty percent of commodity dollars that come into Arkansas are trade dollars, so this can be a serious hit to us."

A reduction in sales of soybeans to China makes farmers look to other markets. "We're always trying to find new buyers, but it's not that easy," Veach said. "It takes time, and we have a lot of competition out there, like with Brazil."

Veach said farm groups like his are working with Congress to lessen the tension. "I don't think all of this [tariffs] is set in stone," he said. "I do think they're battling back and forth right now. The president is adamant, and China can be very set in what they're trying to accomplish. It's hard to say where this thing will end up."

Dow Brantley of England, a former chairman of the USA Rice Federation, grows rice, cotton and soybeans in Lonoke County.

All of his crops are subject to tariffs either by China, the European Union, Mexico or Canada. "I'm seeing declines in prices, and I have a crop that's dry and I'm trying to irrigate," Brantley said of a combination of forces aligning against farmers. "To be frank, I hope like hell the Trump administration knows what it's doing because my a** is on the line."

In 1979, when farmers thought they were being abused by D.C. politics, they took to the streets -- literally.

Harvey Joe Sanner of Des Arc helped lead the "tractorcade" of some 3,000 farmers, some of whom drove tractors to Washington to protest the lack of a safety net for falling crop prices and a rash of farm foreclosures by the government.

"We won't see that ever again," Sanner said Tuesday. "Because of apathy and ignorance. And because I've never known a group less organized than farmers."

Sanner for years was president of the Arkansas chapter of the American Agriculture Movement, which led the tractorcade and similar protests at state capitals throughout the nation's farm belt, and later served as its national president. "Farmers will always be the losers in a trade war," Sanner said. "I am scared to death of what's going on and what it means to rural communities."

Most farmers no longer have the ability to withstand a bad season, he said. "I know farmers who are a bad crop away from giving it up, and these are good farmers. Last year they had some of the best yields ever, but they didn't make a profit," he said.

Sanner said challenges that face farmers are well known: low prices, higher costs, floods or drought, insects, and herbicides that help one crop but hurt another.

"Certainly, farmers don't need to be caught up now in the middle of a trade war," he said. "I've yet to find a farmer who thinks any of this is good. I wish farmers were more united and more willing to speak up. Unfortunately, a lot of them supported this president and are reluctant now to criticize him."

Trump forges ahead in China dispute