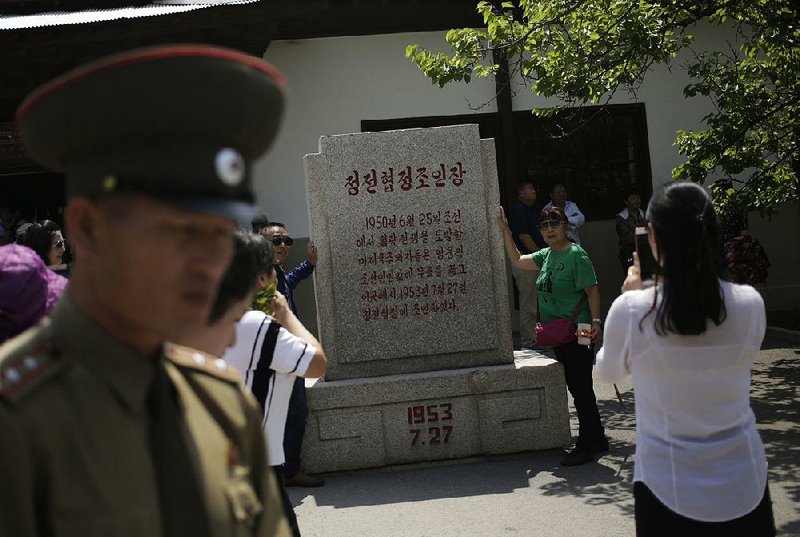 Chinese tourists take photos Wednesday outside the Museum of the Armistice Agreement in Panmunjom, North Korea.

BEIJING -- South Korea urged North Korea on Wednesday to present a plan with concrete steps toward denuclearization, raising the pressure on its leader Kim Jong Un as he met with Chinese President Xi Jinping in a visit designed to convey the countries' growing closeness.

Kim and Xi held a second day of talks at the Diaoyutai State Guesthouse, whose grounds China's official Xinhua News Agency described in unusually lyrical terms as being full of "verdant greenery and splendid flowers," adding to what the propaganda outlet said was the "close and friendly atmosphere" of the talks.

The pomp and circumstance looked geared toward showing off the major improvement in relations between the communist neighbors, along with China's important role in keeping North Korea on track. But it cast no new light on the main question that hangs over the previously reclusive North Korean leader's surge in diplomatic activity in recent months: What next steps, if any, will Kim take to dismantle his country's nuclear program?

At his summit with U.S. President Donald Trump last week in Singapore, Kim pledged to work toward denuclearization in exchange for U.S. security guarantees. The U.S. and South Korea also suspended a major joint military exercise that was planned for August in what was seen as a major victory for North Korea and its chief allies, China and Russia.

Chinese state media outlets quoted Xi as hailing the warming friendship with Kim but included no mention of any specific discussions on making progress on the denuclearization of the Korean Peninsula. Xi said China is pleased that "the momentum for dialogue and easing of situation on the Korean Peninsula has been effectively strengthened," according to Xinhua.

In Seoul, South Korean President Moon Jae-in urged North Korea to present actionable plans on how it will scrap its nuclear program, and for the United States to swiftly take unspecified corresponding measures.

"It's necessary for North Korea to present far more concrete denuclearization plans, and I think it's necessary for the United States to swiftly reciprocate by coming up with comprehensive measures," Moon said. Moon's office said he made the remarks to Russian journalists ahead of his trip to Moscow later this week.

Moon, who has met with Kim twice in recent months, said the North Korean leader is willing to give up his nuclear program and focus on economic development if he's provided with a reliable security guarantee. Moon described Kim as "forthright," "careful" and "polite."

China backs the North's call for a "phased and synchronous" approach to denuclearization, as opposed to Washington's demand for an instant, total and irreversible end to the North's nuclear programs.

Kim's motorcade had earlier been seen leaving the North Korean Embassy on Wednesday afternoon as police closed off major roads and intersections in central Beijing. Gawking pedestrians watched the passing motorcade that included Kim's limousine -- a black Mercedes-Benz Maybach with gold emblems on the rear doors.

China has touted the prospects of more trade and investment if North Korea makes progress in talks on abandoning its nuclear weapons and long-range missile programs.

That could allow the lifting of U.N. Security Council economic sanctions that have hamstrung North Korea's foreign trade, although the U.S. insists those measures can be eased only after the North shows it has ended its nuclear programs. The U.S. says China is in agreement on that point, although Chinese officials say sanctions should not be an end in themselves.

Kim was expected to have sought China's help with getting relief from the sanctions during his visit. Xinhua's report did not mention sanctions, but quoted Kim as saying that the two countries "are as close and friendly as family, and help each other."

Information for this article was contributed by Sam McNeil, Gerry Shih, Hyung-jin Kim and Yong Jun Chang of The Associated Press.