Tobacco-tax increase in Arkansas pitched to raise $121M a year 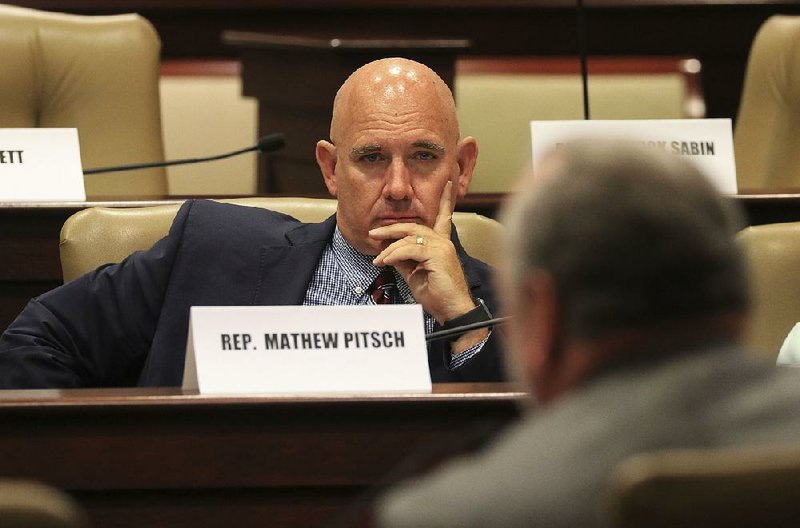 Rep. Mathew Pitsch, R-Fort Smith, listens Wednesday to testimony during a meeting of the Tax Reform and Relief Legislative Task Force. Pitsch won a runoff primary election Tuesday for Senate District 8 and will be in the Nov. 6 general election. ( Arkansas Democrat-Gazette / Staton Breidenthal)

Lawmakers should raise the state's tax on cigarettes by $1.50 a pack and use the added revenue of $121 million a year to help offset smoking-related costs and potentially finance tax cuts, an official for the American Cancer Society's Cancer Action Network said Wednesday.

Michael Keck, government relations director for the nonprofit, nonpartisan affiliate of the American Cancer Society, made the pitch to the Legislative Tax Reform and Relief Legislative Task Force.

The task force is reviewing all aspects of the tax code to see what areas it should recommend for changing. Under the law that created it, its recommendations are due Sept. 1 to the General Assembly and the governor, in advance of the 2019 regular session, which starts in January.

Republican Gov. Asa Hutchinson has said he wants lawmakers to cut the top individual income tax rate during the 2019 session. He projected the cut would reduce revenue by about $180 million a year.

The current tobacco tax is $1.15 per cigarette pack.

The incidence of cancer, heart disease, stroke and respiratory diseases is way too high in Arkansas and the common thread for these poor health statistics is tobacco use, he said.

"Our state's use of tobacco has not improved at the same level as the rest of the country. The adult smoking rate is the third-highest in the country at 23.6 percent and our youth smoking rate is nearly twice the national average of 7.6 percent," he said.

The state's Medicaid program spends $300 million a year on tobacco-related illnesses and an increase in the tobacco tax would reduce the incidence of cancer in the state, Keck said.

He said it's projected that an increase of $1.50 per pack would reduce cigarette purchases to the extent that it prevents 22,500 young people from becoming adult smokers, help 26,900 adults quit, save 14,000 lives and save $1.03 billion in long-term health care costs.

"The increase that we are advocating will allow this task force to more strongly consider many of the things under your consideration, be it the implementation of an earned income tax credit or the maintenance of some tax exemptions, which you may otherwise have to eliminate. This could be the vehicle that allows you to eliminate an inventory tax or possibly allow you to do more with brackets and the rates for individual or corporate income taxes," he said.

A task force co-chairman Sen. Jim Hendren, R-Sulphur Springs, said it's bugged him for a long time that the state spends a lot more money on tobacco-related illnesses than the state collects from tobacco-related taxes.

"But one of the policy issues we face is if we just dramatically raise the tax on cigarettes, will we send that [business] to Missouri [where the tax is 17 cents a pack]? Are we really going to see a reduction in anything other than revenue? Are the people just going to go across the border and develop a huge black market?"

Keck replied that Florida and Wisconsin increased their tobacco taxes and exceeded their revenue projections and didn't see a neighboring state with a lower tax significantly increase its tobacco tax collections.

Texas is the only state neighboring Arkansas with a higher tax of $1.41 per pack, according to a Tax Foundation report. Of the other neighbors, Missouri's is 17 cents per pack; Louisiana, $1.08; Oklahoma, $1.03 (but increasing to $2.03 in July); Mississippi, 68 cents; and Tennessee, 62 cents, the report said.

Keck said Arkansas doesn't have an excise tax on vaping products. They are subject to the state's general sales tax rate of 6.5 percent.

Afterward, Hendren said. "We are not here to raise taxes and that's obviously what his proposal does.

"But if it makes sense to tax that item more because of the health care costs and reduce them somewhere else, that is a legitimate reform proposal," he said.

The task force's other co-chairman, Rep. Lane Jean, R-Magnolia, said in an interview that he doesn't know what the likelihood is of the Legislature raising the tobacco tax.

A three-fourths vote of the 100-member House and 35-member Senate would be required to increase the tobacco tax, Richard Wilson, assistant director of research for the Bureau of Legislative Research, said afterward.

Earlier, Hendren told task force members to prioritize how they would allocate $200 million a year in tax relief through options that they select, which may include reducing the top individual income tax rate, creating an earned income tax credit or eliminating the property tax on business inventory.

The task force also approved studies of: the possibility of merging the Assessment Coordination Department into the finance department; trimming other taxes by tapping excess collections from the half-percent sales tax that is used to reimburse counties for giving the homestead tax credit; and creating uniform property assessment guidelines.