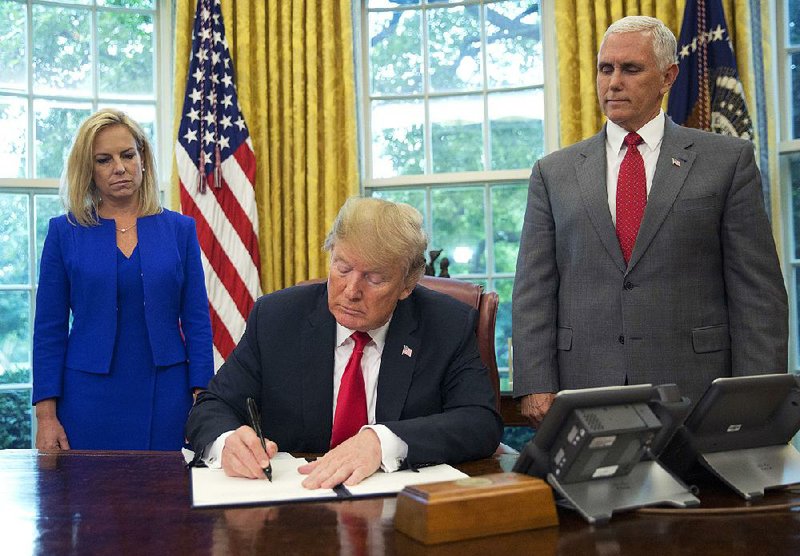 The plan would keep families together in federal custody while awaiting prosecution for illegal border crossings, potentially violating a 1997 court settlement limiting the duration of child detentions.

"So we're going to have strong, very strong borders, but we're going to keep the families together," Trump said as he signed the order in the Oval Office. "I didn't like the sight or the feeling of families being separated."

Trump had repeatedly defended his immigration crackdown, which included forcibly separating children from their parents after they illegally crossed the border. But images of young children in tears, housed in metal cages, set off an international outcry.

For days, Trump and his top administration officials were unwilling to unilaterally reverse the separation policy, insisting that congressional action was required.

"Congress and the courts created this problem, and Congress alone can fix it," Homeland Security Secretary Kirstjen Nielsen said Monday. "Until then, we will enforce every law we have on the books to defend the sovereignty and security of the United States."

Trump's action came shortly after House Republican leaders vowed to bring broader immigration legislation up for votes today to address the crisis, despite widespread skepticism that a bill could pass.

"We will be going through Congress. We're working on a much more comprehensive bill," said Trump, who was flanked by Vice President Mike Pence and Nielsen. "What we have done today is we are keeping families together."

Trump said the order does not alter the "zero tolerance" policy itself that the administration put in place in April. Under that policy, the administration has sought to prosecute as many border-crossing offenses as possible, including those involving families with children.

A Health and Human Services official said that more than 2,300 children who have already been separated from their parents will not be immediately reunited with their families while the adults remain in federal custody during their immigration proceedings.

"There will not be a grandfathering of existing cases," said Kenneth Wolfe, a spokesman for the Administration for Children and Families, a division of the Department of Health and Human Services. Wolfe said the decision about the children was made by the White House, but he added, "I can tell you definitively that is going to be policy."

Trump's executive order instructs DHS to keep families in custody "to the extent permitted by law and subject to the availability of appropriations," language that points to the government's deficit of detention space for parents with children.

U.S. Immigration and Customs Enforcement operates two large family detention centers in Texas and a smaller facility in Pennsylvania, with a combined capacity for about 3,000 beds.

As of June 9, the three facilities had nearly 2,600 of those beds occupied, according to the latest available immigration agency figures.

The agency's network of immigration jails for single adults is much larger, because it leases detention facilities and vacant cells from states and counties across the country. But placing children in those facilities would run afoul of the 1997 "Flores Settlement" agreement that limits the government's ability to keep children in detention and orders them to be placed in least-restrictive setting possible.

A subsequent ruling in 2016 by the 9th U.S. Circuit Court of Appeals bars the government from keeping children in family detention centers for more than 20 days.

Trump's executive order would keep entire families in immigration detention centers, most likely in violation of the 9th Circuit Court's ruling on the Flores Settlement.

An administration official with knowledge of the plan indicated that the Trump administration was anticipating lawsuits and preparing to litigate Flores in court, particularly if lawmakers fail to approve a legislative fix.

House Speaker Paul Ryan on Wednesday said he is pushing ahead with votes on rival House GOP immigration bills, but neither appears to have enough support for passage.

At a news conference, Ryan said he remained hopeful that his chamber would pass a broader immigration bill today that would include provisions aimed at ending the separations that have resulted from the "zero tolerance" policy.

Ryan and other GOP leaders, however, stopped short of predicting passage of a bill that would address other Republican priorities on immigration, including funding for a border wall, while also allowing children to remain with their parents while undergoing prosecution for illegally crossing the border.

Ryan said House leadership is not considering a narrower measure that would only address the family separation crisis, as some members of the chamber have advocated.

"Right now we're focused on getting this bill passed," he said. "If other things happen, we'll cross those bridges when we get to it."

As Republicans met privately Wednesday to discuss their legislation, House Democrats brought about two dozen children to the chamber floor in an unusual morning protest that defied House rules as they condemned the separation of families at the border.

Democrats said the images of children being held in cages in border facilities, some crying for their parents, would be a moment remembered in U.S. history. Rep. Luis Gutierrez, D-Ill., said Americans were "standing up for children, standing up for those who are in need."

As Gutierrez spoke, his microphone was cut off because the gathering in the chamber was considered a breach of decorum. Presiding Rep. Liz Cheney, R-Wyo., gaveled the House to order.

Many Republicans in the House have sought more clarity from Trump before giving their backing to the broader immigration bills.

"Some of the members wanted to make sure the president is very visible in his support for both bills," said Rep. Mark Walker, R-N.C., the chairman of the conservative Republican Study Committee.

Walker said several lawmakers remained undecided, denying leadership of the majority needed for passage. They want to see Trump's support "constantly as we move forward -- that he's out there vocally supporting what he believes is the best pathway forward," Walker said.

Even if Republicans manage to pass one of the immigration bills through the House, it is all but certain to fizzle in the Senate, where Republicans are rallying behind a different approach.

Sen. Ted Cruz, R-Texas, and others proposed a narrow legislation that would allow detained families to stay together in custody while expediting their hearings and possible deportation proceedings.

Under the bill, children under age 18 would be kept with their families in residential centers during legal proceedings. Facilities would have to be "secure and safe." Children would be separated from adults who are not their parent or who have serious criminal records, or if there is evidence of abuse or trafficking.

The government would prioritize processing such families and add 1,000 beds and 225 immigration judges.

"The question is, do congressional Democrats want to actually solve the problem or do they want an issue to campaign on in November?" Cruz said.

"This legislation would keep families together while their immigration status is determined instead of simply releasing illegal immigrants into our country," said Sen. Tom Cotton, R-Ark., who helped introduce the legislation. "This is a very difficult situation, but our bill provides a simple solution, one that will both stop the separation of families and enforce our laws."

Sen. Marco Rubio, R-Fla., also urged the Senate to pass the measure, saying, "It is cruel to separate families. But it is also cruel and irresponsible to return to a policy that encourages parents to bring their children on a dangerous journey. This bill will allow us to change the law so that families will remain together while awaiting prioritized proceedings."

Senate Democrats have rallied behind a bill from Sen. Dianne Feinstein, D-Calif., that would prohibit families from being separated. Feinstein and Cruz have been in talks about a possible compromise.

Walmart and three U.S.-based airlines stepped into the debate this week over the detention of children and their forced separation from parents.

In a Twitter post Tuesday, Walmart replied to a separate tweet calling for a boycott of the retailer after news broke that one of its former facilities is being used as a detention center.

"We had no idea our former store would be used for such a disturbing purpose. We are just as shocked and disappointed as you are," Walmart said.

A former Walmart in Brownsville, Texas, is one of several facilities run by a nonprofit called Southwest Key Programs Inc. that are used to hold the children of parents who have crossed the U.S. border illegally.

The company said June 14 that it had no knowledge at the time of the sale that the building would be used for its current purpose.

On Wednesday, American Airlines, United Airlines and Frontier asked the federal government to refrain from using their planes to transport children separated from their families, saying the controversial Trump administration practice does not align with their values.

The announcements followed reports of Trump's executive order ending family separations, and also prompted a sharp rebuke from Tyler Houlton, a Department of Homeland Security spokesman, who accused the companies of "buckling to a false media narrative" on Twitter.

All three airlines denied that their planes have been used to transport children who had recently been separated from their parents.

American Airlines said in a statement on its website that, "We have no desire to be associated with separating families, or worse, to profit from it," adding that it had carried refugees for nonprofits and for the government, most often for the purpose of reuniting them with family members.

United Airlines followed suit, saying in a tweet from Chief Executive Officer Oscar Munoz that it had "serious concerns about this policy" and that the company's purpose is "to connect people and unite the world." 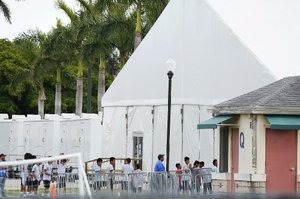 Photo by AP/BRYNN ANDERSON
Children line up at a shelter for unaccompanied youths in Homestead, Fla., on Wednesday. 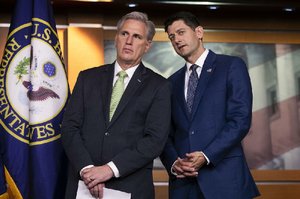